Legend Fighting Championship's 8th event will be happening on March 30, and two more fights have been signed to round out the card that will have 10 fights.

Sources close to the situation have exclusively confirmed with BloodyElbow.com that two of the promotion's newest Japanese stars are set to make their debuts as part of the Legend FC 8 main card. UFC vet and Sengoku welterweight star, Keita "K-Taro" Nakamura will be making his promotional debut against South Korea's Kim Hoon, while Sam Brown of Australia will welcome undefeated DEEP star, Yuki Niimura.

Nakamura is probably the most high profile signing in the card, as the Japanese star has competed all over the world, having 3 UFC fights early on his career, and eventually winning the SRC welterweight grand prix after defeating Yasubey Enomoto, Omar De La Cruz and Takuya Wada.

Niimura on the other hand, is a rising prospect and is undefeated at 3-0 since starting his career with DEEP last year. He will have a stiff test as he faces a very gritty Kiwi in Sam Brown (10-4).

After the jump, check out the full fight card which has two title fights. Follow me on twitter -- @antontabuena 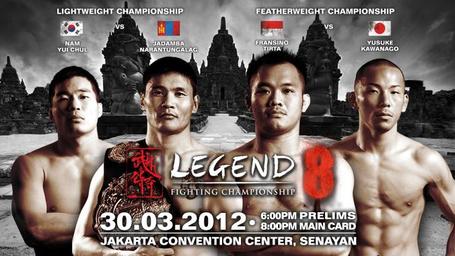 And as a bonus, here are the Legend FC ring girls: