UFC Welterweight prospect T.J. Waldburger has a knack for submissions. Despite being only twenty-three years old Waldburger is an experienced grappler with a Brazilian Jiu Jitsu brown belt and has numerous grappling competitions under his belt. Twelve of his fifteen professional MMA wins have come via submission and that includes his last two UFC bouts, in which he showed excellent command of transitions.

Submission grappling arts like Brazilian Jiu Jitsu, Judo and Catch Wrestling teach countless set ups for their submissions: from all different positions, grips, and angles. Students drill these movements until they are able to execute these techniques smoothly and seamlessly. These techniques are normally dictated by the position they start in: the armbar from guard, a mounted triangle or rear naked choke.

Working from positions like the guard, mount or side control is where new students are taught how to gain and use the position to their advantage. But learning how to navigate the transition periods between positions is what separates advanced grapplers from beginners. And mastering attacking in transition is often the difference between a good grappler and an elite grappler.

gifs and video after the jump...

At UFC Fight Night 25, Waldburger faced Mike Stumpf from Team Curran. Late in the first round Waldburger went for an armbar from side control. It is clear Waldburger has drilled this a great deal, as the movement is very smooth and quick. But so is Stumpf's defense of the armbar; he instantly turns into the armbar and tries to jump over Waldburger's legs.

This is a common outcome for a submission attack from a rehearsed position, an experienced opponent sees the submission coming and executes an equally well drilled escape. This allows him to slip out almost as soon as the attack starts.

Waldburger rolls with Stempf to try to regain the armbar but Waldburger gains the upper hand is in the in the moment after Stumpf slides his head out of the armbar. Stumpf's arm is out of danger, but he has not yet passed to side control and they are in an awkward, in-between position. Here both fighters must make a split second decision and Waldburger acts first, putting a hand in Stumpf's armpit to push him back towards his legs. And it is here that Stumpf makes his mistake. He might be trying to simply get to his knees or he might be thinking of leaping over Waldburger's legs, but either way Stumpf turns towards Waldburger's legs and right into a triangle. This idea of locking in a submission during the transition created by an escape from another submission is referred to as "chaining submissions".

In Waldburger's most recent fight on UFC on FX 2 against Jake Hecht, he lock up a submission from a true scramble. Waldburger had clinched and went for a takedown, but his momentum carried him down as well on top of Hecht into a pseudo-turtle position. It was from this transition that Waldburger locked up an excellent armbar.

Now lets look at how Waldburger adapted this technique on almost pure instinct to fit the situation at UFC on FX 2. 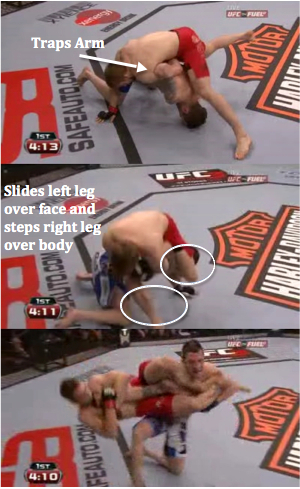 Waldburger is on top in the red trunks and he has landed on top of Hecht. Unlike the traditional Juji Gatame from turtle, Waldburger is not behind Hecht, instead he is off to the side. Waldburger has throw his right hand to check his momentum on the mat but his left arm is already controlling Hecht's arm. Right now Waldburger's hips are very high, he is not heavy of Hecht and his balance is off, to help steady himself Waldburger's left leg slips over Hecht's head.

This all happens very quickly and as Waldburger catches his balance he seems to realize he is in ideal position for an armbar. He brings his left leg in tight to Hecht's face and hugs the arm tight to his chest to prevent it from being pulled free. Hecht is struggling at this point because he too has realized his arm is in danger. Waldburger wants to bring his right leg into play, so he steps it over Hecht's body.

Lets see that all together now.

The speed at which Waldburger acts is what makes this armbar so impressive and difficult to defend. It also shows Waldburger's excellent grappling abilities as he was able to act so quickly and adjust his technique to fit the position. Hecht went from simply taking stock of an awkward position to being in an armbar in just 3 seconds.

Now unlike the Juji Gatame video above Waldburger lands facing towards Hecht's head instead of the legs. While it is possible to break the arm from that position it isn't ideal, so after a quick attempt to force a tap but he quickly feels he isn't in the proper position. So Waldburger turns to face the legs, to force Hecht to roll on to his back like a classic Juji Gatame.

While facing towards the head is not correct in the traditional armbar from turtle attack that most white belts are taught in Judo and Brazilian Jiu Jitsu, there are plenty of variations. We will close with a video of Renzo Gracie teaching his own variation of the armbar from turtle that seems to be a more developed version of what Waldburger was attempting. Notice that Waldburger does slam his shoulder in to the mat as Renzo warns against in the beginning of his lesson.

Thanks to KJ Gould for the filmstrip picture.

And thank you to the gif wizard that is Grappo for the gifs.