In this chapter of MMA Origins, we will return to Brazil. By the 1960s, the rivalry between Brazilian Jiu Jitsu and the catch wrestling inspired Luta Livre had escalated beyond a simple sporting rivalry. Clashes between the two arts began to resemble a gang war as confrontations occurred inside and out of the Vale Tudo ring.

The 1970s were a tumultuous time for Brazilian Jiu Jitsu, as it was not as simple as two sides against one another. The disagreements between Gracie family patriarch Helio Gracie, his former students and his own nephew Carlson Gracie had left deep divides in the Brazilian Jiu Jitsu community. Throw in the branches of Jiu Jitsu that didn't included Gracies, like Oswaldo Fadda's school, and the result was a landscape of shifting loyalties and multi-sided conflict worthy of a George R.R. Martin novel.

And it was in this chaotic landscape that a new generation of Gracies came of age. Helio's sons, Rorion, Relson, Rickson, and Royler were foremost among these new Gracies. They grew up under the tutelage of their father, cousin Rolls and, much to Helio's chagrin, Carlson Gracie.

Rolls and Carlson both altered Helio's slow, attrition-based style of jiu jitsu in favor of a more aggressive, athletic styles. Both trained in and out of the gi, but while Rolls maintained good relations with Helio, Carlson did not see eye-to-eye with his uncle. Tensions reached the point to where Carlson left the Gracie Academy to start a rival school. While the coolness between relatives was hardly a friendly rivalry, there was never any real animosity between Helio and Carlson as the real enemy always remained Luta Livre.

Helio stressed the importance of mastering the fundamental techniques, while Rolls and Carlson both believed that Jiu Jitsu needed to continue to evolve as a martial art. Both saw the value of learning from other grappling arts and integrating new techniques. To that end both Carlson and Rolls would train both in and out of the gi. Rolls competed in wrestling in the United States, trained Judo with Carlson and trained in sambo, the Russian take on Judo, which makes heavy use of leglocks. 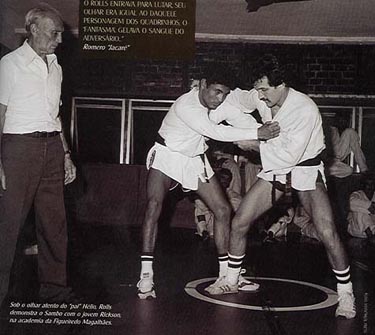 Rolls helped mend fences between Carlson and Helio, and was a hero to his younger cousins. His death in 1978 at age 32 from a hang gliding accident hit the Gracie family very hard.

Royler credited Rolls for helping several members of the family develop not only their grappling, but also their competitive spirt, and Helio thought of Rolls like a son. His death also cooled relations between Helio and Carlson, as they continued to run their rival schools.

Rolls also made a big impact on the young Rickson; pushing him to train in several different grappling arts and driving Rickson constantly to better himself. Rickson was not only an excellent student, but also a natural athlete and progressed quickly; he was teaching classes at his father's academy at age fifteen and was awarded his black belt when he turned eighteen.

Rickson's big break in Vale Tudo came from one of the inter-jiu jitsu rivalries. While these divides normally played out in the developing sport jiu jitsu competitions, different jiu jitsu students did occasionally meet in Vale Tudo. Helio's old student and adversary Waldemar Santana, now a promoter, came the Gracies with a challenge; the Gracies could pick any fighter they wished to match against Santana's star fighter, a man named Rei Zulu.

Zulu was a huge, athletic fighter and had been taught Jiu Jitsu by Sanatana. He boasted an undefeated Vale Tudo record and won his fights in such vicious and emphatic fashion that he was having trouble finding willing opponents. Rickson, all of twenty at the time, jumped at the chance. This was Rickson's first prize fight and he won by rear naked choke. Sadly, there is no video of this first match. However, four years later these two re-matched in Maracanazinho Stadium on national television. The fight ended when Rickson was able to take Zulu's back from guard and sink in a rear naked choke.

(A highlight of Rickson Gracie vs Rei Zulu II via graciesthefilm)

While his fights with Zulu would prove to be Rickson's highest profile matches in Brazil, arguably his most famous fight would not take place in ring.

Hugo Duarte was one of the top Luta Livre fighters of the 1980s and had no problem voicing his opinions of the Gracies and their jiu jitsu. One day in 1988, Rickson set out to silence Duarte and found the man on a beach in Rio. Rickson demanded Duarte apologize and when he refused Rickson slapped him across the face. There is actually video of this fight, though it is very rough. This was not an easy victory for Rickson, at one point he appears to be hit with some vicious knees from Duarte. But in the end Rickson mounts Duarte and reigns down punches. Duarte is forced to submit to the strikes and Gracie honor is satisfied for that day.

After this incident several Luta Livre students went to the Gracie Academy during classes with the intent of beating the students and tearing up the school. In the face of this dojo storming assault, those at the school called for help and they got it from a surprising source when a Carlson Gracie black belt named Wallid Ismail came the school's defense. 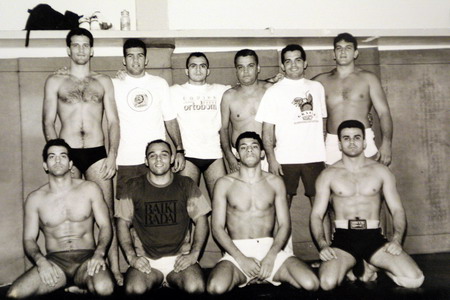 Ismail was fighter at heart and a stalwart defender of Carlson Gracie. He was famous for challenging anyone who spoke ill of his instructor and this included several Gracies.

Carlson Gracie (standing, shirtless in the center) with his students. Ismail is standing on Carlson's left

At different points in his life Ismail fought and defeated Ralph and Renzo Gracie in jiu jitsu matches. And in 1998 he choked Royce Gracie out with a clock choke in a highly publicized match match.

It was't uncommon for Carlson's students to butt-heads with the Gracies, but they also stood opposed to Luta Livre fighters. Carlson had an anyone, anytime, and anywhere policy towards fighting, he and his students did not fear defeat. Carlson fighters took their lumps in Vale Tudo and then would get right back into the gym to learn from their mistakes.

In 1991, Carlson fighters agreed to meet Luta Livre fighters in a high stakes fight card. Ismail agreed to be one of three Jiu Jitsu representatives. Murilo Bustamante, a Carlson Gracie black belt and future founder of Brazilian Top Team, and Fabio Gurgel, one of only six Rolls Gracie black belts and the future founder of Alliance Jiu Jitsu, would be the other two jiu jitsu fighters. The promoters matched them against three Luta Livre fighters and promoted it as a card that would show which art was superior. Ismail was paired with Eugenio Tadeu, a very skilled grappler who had fought Rolyer Gracie to a stand still in a 55 minute match behind closed doors in the late 1980s.

The two engaged in a grueling match that Ismail won when he forced Tadeu out of the ring and he was unable to reenter the ring in time due to an injury. Tadeu would later claim that jiu jitsu supports prevented him from reentering the ring.

Bustamante also won when he threw his opponent from the ring and his opponent was too injured to start again. Gurgel used dominating top position to force a submission from strikes. This card is seen as one of the major blows against Luta Livre, as it was a highly publicized defeat for the art. While Luta Livre supports lost none of their passion, they became fewer in number as the the 1990s wore on.

The last great clash between Luta Livre and Jiu Jitsu took place in 1997. A promotion called Pentagon Combat put on a show in Rio that would again pit the two arts against each other with a main event of Renzo Gracie vs Eugenio Tadeu, the same man who lost to Ismail. The fight started out normal enough but then fights began to break out in the crowd. Those fights turned into a full blown riot (4:15) and the fight was ruled a No Contest. Renzo was actually stabbed in the resulting riot.

This marked the climax of the rivalry and it would soon evolve into the new forms as Vale Tudo transformed into true Mixed Martial Arts. And all this time fighters had been brawling in Brazil, another son of Helio Gracie, Rorion Gracie, had started a promotion in the United States that would grow to become a leviathan.

Rickson Gracie vs. Hugo Duarte in the Greatest Beach Fight Ever

Renzo Gracie vs. Eugenio Tadeu and the Show Ending Riot