There is no martial art more reviled in modern MMA circles than taekwondo.

Simply mentioning the "way of the hand and foot" conjures images of strip-mall dojangs and nine-year-old black belts. When an MMA fan wants to criticize a fighter's performance, accusing them of "taekwondo point fighting" is one of the nastier zings available. 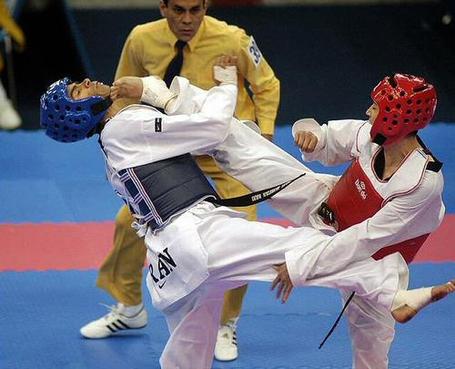 As a long time TKD competitor (since retired) I try to keep my head down during these little diatribes. I loved TKD. I had a ton of fun doing it. It's an intense, fast-paced, exciting sport, but it is pretty impractical in what my boxing coach calls a "street situation," and I can't imagine it would be fun to watch unless you've competed and know what you're looking for.

All that said, I find it pretty funny that TKD gets used as the poster child for pitter-pat strikes, since the scoring standard for the sport actually awards the exact opposite. In a three-minute TKD round, you might see 50 kicks thrown, only to result in a score of 3-2, or even lower. For a kick or a punch (very rare) to score a point in TKD, it must land with what's called "trembling shock."

A blow that lands with trembling shock is a blow that moves the target: stops them in their tracks, snaps their head back, knocks the wind out of them, etc. As someone who has scored competitions, I was looking for blows that would damage an unprotected opponent (or even better, those that actually managed to damage a protected opponent).

Which brings me, in very roundabout way, to something that's been bothering me about the Diaz-Condit fight.

We all carry our biases with us into every fight, and I guess I'm still looking for "trembling shock" when I score MMA and even boxing. I want to see blows that snap a fighter's head back, that visibly hurt him, that buckle his legs or force him into an immediate defensive adjustment.

One of the oft-repeated refrains of those who scored the Diaz-Condit fight for Condit, is that Condit landed the more numerous, harder strikes. I agree with the former -- which is a provable statistic -- but not the latter, which, admittedly is subjective.

What I saw in that fight was Nick Diaz -- especially int he first two rounds, and even, to some extent in the third -- repeatedly landing "trembling shock" blows (both to the body and head) and Condit landing very, very few comparable shots (he started to pop a few off in the third and especially the fourth).

We all know that not all strikes are created equal, but I would take it a step further and say that not all "significant strikes" (however that is defined) are created equal. All scoring is subjective, of course, but to my subjective view, one strike that does obvious damage, or has an obvious effect, or for lack of a better term lands with "trembling shock" is worth more than a dozen that don't.

This isn't about not valuing leg kicks. You only need to watch a Jose Aldo or Pat Barry fight to notice that leg kicks can very easily meet the trembling shock standard. When you kick a guy's leg and he grimaces, or stops, or changes stances, or falls down, you've hit him with trembling shock. The thing is, I saw none of that from Condit's leg kicks. I know Nick Diaz is tough, but nobody is tough enough to walk through the volume of leg kicks landed in that fight, if they are hard, and land clean. Uriah Faber is a tough guy too, but he couldn't move properly at the end of five rounds with Aldo. In the Condit-Diaz fight, I didn't see any noticeable effect from those kicks (which were Carlos's most effective and numerous strikes) in five rounds.

I realize that TKD scoring standards don't carry the day anywhere else, but I do find them applicable to both boxing and MMA. We throw strikes in martial arts to have an effect. If we have to apply a subjective score for striking, we should actually reward the blows that do what they're intended to do.