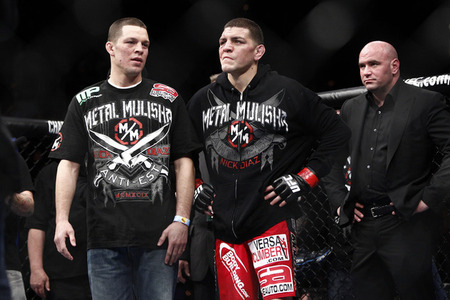 A lot has been said and written about Nick Diaz’ fight with Carlos Condit. One point of discussion has been Diaz seeming inablility to adapt in a fight that was at least close or – in the opinion of many fans and more importantly the judges – he was losing. Personally I thought Diaz did win the fight, but this is definitely a case of "could’ve gone either way". More interesting to me is the question, what was going on with Nick, wether he was following a gameplan, if he really did get bad advice by his corner and so on. Luckily, the UFC provides an audio-stream straight from the corner of Nick Diaz. Even more luckily for you gentlemen I had the insane idea to make a transcript of the high-points for the poor suckers who do not get these streams for free like us germans. Obviously I did regret that decision by the time I tried to decipher the screaming of Nate Diaz and the Gracie-Team for the first minute. But well…gotta finish what you started and give back to the community and such. So I pulled through.

However: I was unable to identify any other speaker than Nate Diaz, so I just labled them "Red Corner". Most oft he time, it probably was Richard Perez, his boxing-coach. I left out the inconsequential stuff such as "you want water?" most of the time. Whenever you see [...] I couldn’t understand what was being said and that piece is missing. Whenever you don't see that I probably still left out a bit. All these are direct quotes however, as precise as was possible. The timecodes are from the clock in the round and not extremely acurate but they’ll give you an idea, what was said when and it's the only way to sync everybody regardless of the source.

Editor's note: Bloody Elbow has not verified the word for word accuracy of this post. Also, while our site policy involves not posting "bad language" on the front page, this post does contain strong language.

Before Rd1:
Nate: Fuck this guy, be smart a’right?
Nate: Wake up, Dude! Wake up! There you go!
Red Corner (probably talking to the corner-team): Be calm in the corner. That’s where the cameras are, they’re tryin’ t make us look bad. The camera [...] is makin’ us look bad for freakin’ out so be calm on the camera’s
Nate: Watch that straight right left hook he’s gonna try, straight right – left hook. Red Corner: Let’s go Diaz! Be smart! Let’s do it!

At this point I realized this would take forever and decided to drop most of the redundand stuff or sum it up!

Before Rd 2:
Nate: Sit down, sit down.
Richard Perez: Don’t let him circle, you hear? When you got him against the cage...
Nate (interrupting): Deep breaths, deep breaths.
Richard Perez: Deep breaths, out of your mouth! Now...when you back him up against the cage Nick, you gotta stay in his face hard, you understand? So what you’re gonna do is your gonna pump that jab...
Nick: (to Nate, interrupting) Gimme the bottle of water.
Richard Perez: And you go to the body and then back to the head. Head-Body, it’s wide open, you can get him.
Nate: He’s tryin to make you chase him too [him and Perez talking over each other] Cut him off real good.
Nate: He’s tryin to coast for five rounds. Cut him off good!

Round 2
(I’ll leave out most of the constant screams of "cut him off" here. Know that they are there till the fight ends)

*Lot’s of calls for cutting Carlos off, going to the body and some feints from here on out *

Before Rd 3
Nate: Ok, sit down
Red Corner: You can’t finish him by follwoing him. Your doin good [...] and come back with the uppercut.
Nate: Keep doin’ what you’re doin.
Red Corner: You’re doing good. You got him runnin now. He’s gassin out from runnin. Nate: You ain’t gonna have to chase him so much, too. You can if you want but you don’t have to. He’s trying to make you chase him around some hard shit (?). You can wave him down like "Come to me motherfucker!". [...]You won the last two rounds so keep doin what you’re doin. But you can make him come to you too. Or do what you want. You can do that too, he ain’t doin nothin.
-- Can’t understand what Richard Perez is saying here, unfortunately
Nate: Feints too, ok? Make him throw, make him throw. Good job brother, you’re doin good.

*Lots of "cut him off", "turn it up", "make him come to you" and all his corners favorites so far*

Red Corner (to Nate): He’s gotta get the punch-combos going
Nate: Yeah. It’s hard though when you’re chasing the fucker all over the place.
Nate (0:16): Don’t chase him, walk him down, Nick!
Nate (after Condit slipped): What happened? Did he fall?
Red Corner: Yeah, he fell.

Nicks corner is clearly frustrated that he let’s Condit escape from the cage so often, exclaiming "aw man!" and calling for him to stay on Condit.

*again, there’s a lot of "let your hands go", "cut him off" and "Let him come to you" all throughout this round*

Before the 5th round
Nate: Hey ref! Ref! Ref! Ref! Ey, they keep wetting him! He’s all slippery because they keep pouring water all over him.
Referee: Alright, alright!
Nate: There’s water...
Somebody says: What do you think. Maybe Nick
Nate: No. No, no, no, no, fuck that, you got every round.
Somebody, maybe Nick (Although it doesn’t sound like him) says: "Don’t lie to me"
Nate: He might have got that last round but that’s it. You got the rest. You’re up three to one, okay? Rinse it out, take a drink. Let’s get a couple of ten second intervals in this one, ok? Whenever you want, whenever you’re ready.

Lots of calls to "set that hook up", plus the usual stuff. Nate informs Nick oft he time at the 2 and 1:30 mark.


Official: Now get in there. You know what to do?
Red Corner: Yes, Sir!
Nate: Gimme that shirt!
Dana White: Good job, dude!
Nate: Ey! For sure four to one, a’right?
Nick: I got that? I got that homie?
Nate: Yeah Fuck yeah, you got that.
Nick: I pushe him back the whole time
Red Corner: Yeah, yeah, he ran.
Nate: All we got is the sweatshirt. Ey yo, put this on. I tell you [...] four to one for sure. No problem.
Red Corner: He ran too much.
Nick (probably looking at the replay): They’re showin only (?)his shit.
Nate: Yeah, that was the last round. But you got four to one for sure. There’s no way...
Nick (interrupting): I almost finished that armlock.
Nate: Yeah, yeah, I know. He knew he was biding (?) his time too. Hey look, Nick, you guaranteed no matter what won that fight.
Nate (shaking Greg Jacksons hand): Good fight!
Nate (shaking Carlos’ hand): Good fight, Carlos
Nick (after a few steps): Ran too much
Nate: Yeah
Nick (talking to Lorenzo Fertitta. Unfortunately, this is very hard to understand) : [...]You asked me to fight, I came here to fight. I’m not gonna[...]I came in a little heavy. It was either I could cut the calories or cut the sparring [...]

Nate pulls him away as the scores are ready to be read.
Nate: "Hey, listen. Listen: He did what he had to do, alright? That’s what. So he’d get through that fight"

And that was how Nick went into these last seconds before the decision was read. Listening to that was really kinda tragic. Unfortunately no further conversations were recorded although you can clearly see Nate and Nick talking in the background during the Condit-interview.