UFC 144's Facebook Prelim fight between Chris Cariaso and Takeya Mizugaki was for many watching yet another bout in a long line of judging controversies that have plagued the sport of Mixed Martial Arts for years. Even with the UFC's Marc Ratner acting as the de Facto Athletic Commission overseeing and appointing officials for the event, somehow the hand picked judges weren't without fault. Controversy would not be limited to this fight; the main event Lightweight title fight between Frank Edgar and Benson Henderson left people scratching their heads when Henderson was given 4 rounds to 1 on certain scorecards.

UFC President Dana White felt the decision rendered over Mizugaki vs Cariaso was so obviously wrong he awarded Mizugaki his win bonus as a means of compensation.

But let's not dwell on the negative. In this fight we got to see a solid display of closed-guard work from Cariaso that for some reason had UFC Commentator Joe Rogan confused as to what he was seeing. At one point in Round 2, Joe Rogan remarks:

"I'm not sure what Cariaso is doing now, I've never seen that before - I think he's making that up as he went along"

Not long afterwards Cariaso transitioned into something Rogan was more familiar with and called the '100%' or '100 Per Cent' as it is known in Eddie Bravo's 10th Planet Jiu Jitsu system.

After the jump I give more insight into the closed guard positions Cariaso was using, as well as the sweep that momentarily gave him the advantage over Mizugaki, illustrated with diagrams and animations.

All technique analysis for information purposes only. Do not attempt these techniques without qualified supervision.

Clinched Closed Guard: To begin with, let's look at Cariaso using a pretty classic form of MMA closed guard where he has Mizugaki's posture broken, an arm wrapped over the back of Mizugaki's head and a form of wrist or hand control. Cariaso's legs aren't actually in a full closed body scissor and are in fact open, but due to the broken posture and upper body control it resembles more of a closed guard strategy than an open guard strategy (Plus in the course of a fight a good guard player will be transitioning between closed and open guard strategies depending on how his opponent reacts).

Mizugaki is able to duck out of the upper-body control and land a punch, which forces Cariaso to adjust his clinch and use bicep control instead of hand / wrist control, while bracing his left foot in Mizugaki's right hip so he has options for hip movement later on . Ideally Cariaso could have under-hooked this arm to connect his hands in a more solid clinch and use a flared elbow of his under-hooking arm as a block for any punches Mizugaki might try from there. The single under-hook clinch would have given Cariaso options such as an arm triangle, back take, escape, or an armbar to triangle path depending on Mizugaki's reactions. With the Bicep Control and Foot In Hip, Cariaso indicates he's primarily looking for the classic strategy of isolating a limb to attack to setup a Submission such as a triangle choke. 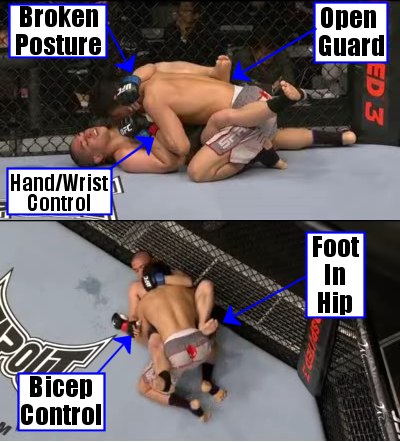 Seatbelt Closed Guard: Joe Rogan may have been confused, but what Cariaso was actually doing was a form of closed guard that protects you effectively from strikes on the ground that has been around in Brazilian Jiu Jitsu for years. In Antonio Rodrigo Nogueira' 'Guard For MMA' book from Victory Belt, I believe he refers to it as a seatbelt guard and many believe it is more functional for MMA than the Rubber Guard due to it not requiring the flexibility in the legs and hips, while still keeping the opponent's posture broken and his striking offense limited.

To set it up, Cariaso has to clear Mizugaki's left arm that is controlling his bicep and does so by bringing in his right knee as a wedge and lever. Cariaso then swims his left arm that is wrapped over Mizugaki's head, around to the other side while sitting up and posting on his right arm as if going for a Guillotine choke. To finish, Cariaso instead grabs the inside of his left knee to lock himself in place, though his feet remain uncrossed. Mizugaki is limited to short body punches on his head-side, while his other arm can be controlled by Cariaso. Cariaso's head is relatively safe and it is difficult for Mizugaki to regain his posture.

100% / Shoulder Pin / Half-Stocks: Giving up on the Seatbelt Closed Guard, Cariaso releases the grip on his left leg and while keeping pressure on the back of Mizugaki's head, scoots his butt back so he can sit more upright. Mizugaki is unable to duck his head out, so instead postures his head up and drives into Cariaso. This motion gives Cariaso the opportunity to swim his left arm inside as an under-hook while keeping Mizugaki's head trapped in place.

Cariaso links his hands and has a Half-Stocks hold - or the '100%' Joe Rogan refers to from Eddie Bravo's system. In Judo it is also known as a Shoulder Pin, and the sweep option has existed in Judo's Newaza for at least a few decades and is an option when Obi-tori-sumi-gaeshi (gripping over the back at the belt combined with a overhead elevator sweep) fails.

Cariaso has his left leg inside as a 'Butterfly Hook' or elevator, and works to get his right leg out from underneath Mizugaki and onto his back. As Joe Rogan correctly notes, the fence is blocking the possibility of sweeping to that side and so Cariaso uses his right leg to push off the fence and turn himself.

Joe Rogan also mentions you can get a neck crank from here, and it's certainly possible with some adjustments. With the Half-Stocks grip you can cross your feet in a closed guard and crunch the trapped head in, but a more effective neck crank would be from a half-guard on the leg opposite to the side of the upper body you have trapped, and while keeping your hands linked slide the elbow of the under-hooking arm on top of the opponent's head and use that as a brace to drive their head down and into their body. A Full Stocks hold is when you have both their arms under-hooked with their head trapped. In Jiu Jitsu it's also known as a Crucifix Neck Crank, and can be finished from mount or from a sit-out as if going for a Head & Arm hold / Scarf hold / Kesa Gatame. (Warning: This Full Stocks neck crank is particularly dangerous as it can cause separation of the upper vertebrae and might lead to paralysis or death.)

Secrets Of Sweeping: By using his right foot to push off the fence and turn himself around, and by keeping his left leg inside as an elevator, Cariaso is executing one of the fundamental concepts of sweeping. This concept is to shift the opponent's center of mass up and onto you, causing most of his bodyweight to be 'floating' instead of 'grounded'. This simple concept makes for sweeping opponents much easier and is similar to the concept of off-balancing a standing opponent to make a takedown, trip or throw much easier.

The other main concept of successful sweeping is sometimes known as 'Table Topping' which refers to the limbs of an opponent that act as a base for stability on the ground. Imagine the opponent is on top in your guard, and his posture is down. His arms on the ground act as 2 legs of the table, his knees as another 2 legs, and his feet as yet another 2 legs of a table. In order to tip this table, you either need to remove some legs on one side or to block them, and then put pressure on the table where the legs used to be or pressure toward where they're blocked in order to flip it.

Cariaso's Single Elevator has taken Mizugaki's right foot and knee off the ground while 'floating' his center of mass. This makes it difficult to post that leg and regain stability on the ground. The Half-Stocks / Shoulder Pin limits Mizugaki's right arm in being able to post as well, all together combining for a successful sweep. Rather than sweeping directly to Mizugaki's right side at 90 degrees where his leg might be able to come down and post, Cariaso keeps Mizugaki floating and sweeps at 45 degrees towards Mizugaki's upper-right side where his arm can not post, and so Mizugaki goes over.

Another way of thinking about it is imagining your opponent on a clock face, his head pointing at 12 and his feet generally at 6, and each limb being able to post across 3 hours of the clock. Cariaso blocking Mizugaki's right arm prevents posting that arm between the hours of 12 and 3, but as Mizugaki's right leg can post between 3 and 6 (with a possibility of being able to post an hour either side of this range), Cariaso sweeps him at 1:30 for success.

Unfortunately for Cariaso, in moving himself around and moving his left leg as a 'Butterfly Hook' / Single Elevator, to an almost Open Half Guard (which helps keep Mizugaki floating) he is unable to land in a secure mount. In fact with his right arm free Mizugaki cleverly pushes off of Cariaso's open legs while freeing his own legs until he has enough space to spin out and get back to his feet. If Cariaso was able to adjust mid-sweep and get his left leg on the outside of Mizugaki's right leg he may have been able to grapevine and work towards a low mount off of the sweep.

Here is a video of the Seatbelt Guard with various options off of it, including the '100% Sweep'.

Here is a scan from the 1984 book "Fighting Judo of Kashiwazaki" showing the 'Shoulder Pin' and sweep as it calls it (click for large image).