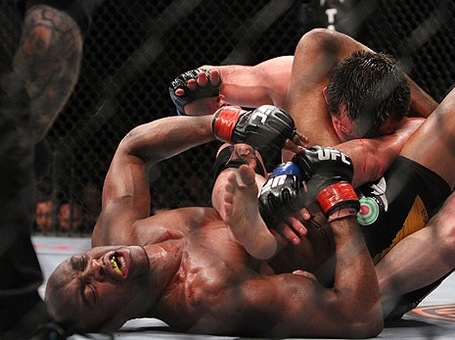 We have all seen spectacular moments in combat sports on television that have embedded themselves in our minds forever. I will never forget which stool I was sitting in when Anderson Silva robbed Forrest Griffin of his soul at UFC 101. I just stood sat there in absolute disbelief and laughed. It wasn't even like it was funny. I mean, it was but I was just laughing out of sheer disbelief. I was stunned that any person could do that to another human being.

I have been lucky enough to witness a few great moments live in the few events I have attended. I have seen Machida KO Rashad Evans for the belt, Cain Velasquez destroy Brock Lesnar and the 25 minute epic between Dan Henderson and Mauricio Rua. But one moment stands head and shoulders above the rest: Anderson Silva's hailmary triangle armbar onChael Sonnen @ UFC 117.

The build up to this moment was I think what made the payoff so great. Chael had claimed his title as the p4p best trash talker in MMA and had said everything imaginable to get under Anderson's skin. The pre-fight press conference and the weigh in had only poured more fuel on an already raging fire. Oracle Arena was rocking as the fighters were introduced and only got more intense with every Sonnen takedown. The chants of "SON-NEN" and "U-S-A" grew more and more deafening as the fight progressed and once Sonnen secured his takedown in the 5th round, people around me were celebrating the victory he had seemingly sealed. Then, it happened. Anderson snuck his left leg over Chael's head and locked up that triangle armbar sending the crowd into hysterics. When Josh Rosenthal pulled Anderson off of him, the building almost collapsed from the reaction. I was personally stunned silent. I literally could not believe what I had just seen and knew right away that I had been witness to something I would likely never experience again.

Now it is your turn. I would like to know what your answer is to this question and what it was that made it so special. Some of us have probably even been in the same place at the same time for these moments. I am very interested in hearing from everyone.

Originally posted @ headkicklegend.com. Give us some love.