With the lead up to UFC 144 in Japan, it seems only natural to look at the spark that lead to the MMA explosion on the Japanese isles.

In the early 1990's mixed martial arts was growing all over the world. While it wasn't MMA as we know it today, at several locations around the globe martial artists were beginning to dabble what we would recognize as MMA. In Brazil Vale Tudo was a proving ground for Brazilian fighters, the United States had hosted its first MMA match and Japan's Pro Wrestling was transforming into a real fight sport.

While Pro Wrestling is popular in Japan, it is also a hot bed for traditional martial arts. While long-standing martial arts that are steeped in as much tradition as Karate or Judo are resistant to change, a man named Takashi Azuma looked to evolve traditional martial arts. A black belt in both Judo and Kyokushin, a hard form of Karate. Azuma began to try to combine the two arts into what he called Kakuto Karate Daidojuku, translated roughly as "Combat Karate."

This style incorporated techniques from Karate, Judo and ones from outside both arts. In 1981, Azuma debuted his art with a sport form in which fighters wore gis, head protectors and gloves. Punches, kicks, knees, elbows and head-butts were all legal on the feet, as are Judo throws and submissions. No strikes were allowed in ground fighting, but if a fighter was in a dominate position, either the mount, knee-on-belly or standing over a ground fighter they can mime punches and stomps which will force a stoppage if the bottom fighter is unable to escape.

Daidojuku as a sport is worth looking into as it is a different take on MMA and produces some pretty excellent highlight reels. This sport pre-dates Shooto by five years and could be considered Japan's first MMA league.

Shooto founder Satoru Sayama had an exhibition match with a Daidojuku fighter under Diadojuku rules once. Sayama wore a black gi top and black leggings. While Sayama's high flying style drew appaluse from the audience, it was the Daidojuko fighter who dominated the match, and lands a nice a flying armbar submission. 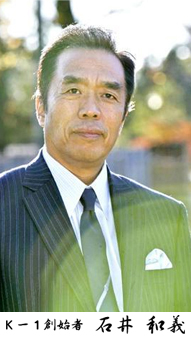 Another Japanese move towards MMA came from a different part of the Karate community. Kazuyoshi Ishii, like Azuma, created his own form of Karate but instead of combining it with Judo, Ishii removed rules to create what is known as Seidokaikan or "Full Contact Karate". Ishii was interested to see how his brand of Karate would stack up against other striking arts, and to that end he created his own Kickboxing promotion meant to bring together Karate, Taekwondo, Muay Thay, Savate, San Shou, western boxing and other striking arts. Called K-1, Ishii streamlined kickboxing rules to make for more exciting fights and to attract more martial artists, this included allowing knee strikes to be thrown.

While a striking focused promotion and not a true mixed martial art because of its lack of grappling, K-1 still had the same spirt as other MMA pioneers; the wish to test style against style. In 1993, K-1 held its first event to moderate success but it was in April of '93 that K-1 had its first break out event and make its biggest contribution to Japanese MMA: The Grand Prix. A grand prix event is a one or two night tournament that pitted elite fighters against each other to see who is the best through a simple single elimination bracket, and it would become the calling card of Japanese MMA promotions. While difficult to pull off and hard on fighters, they can create sports drama of the highest order if everything comes together.

Here is the final match of the '93 Grand Prix, Hoost is in the red trunks and seems to be finding his range early on but Cikatic ends the fight with a big right hook to become the first K-1 Champion.

The most significant push towards modern MMA came from two professional wrestlers, Masakatsu Funaki and Minoru Suzuki. Students of the Pro Wrestling great Antonio Inoki, student of the legendary Karl Gotch, and the man who faced Muhammad Ali in an exhibition mixed rules fight.

Funaki and Suzuki were pro wrestlers but practiced legitimate grappling and loved competition. They were a part of the Japanese Pro Wrestling promotion Fujiwara Gumi along with a young American up-and-coming wrestler, Ken Shamrock.

Ken was a troubled youth, constantly running away and eventually he was sent to Bob Shamrock, a man well known for turning around trouble young men. Bob had several young men living on his ranch at any one time and he had his own way of settling beefs between hot-headed teenagers, he would give them boxing gloves and allow them to scrap things out. Ken was a natural fighter and became known as "one-punch" on the ranch.

Ken took that talent won money in local tough man competitions, back alley bet fights, became a bouncer and a stand out wrestler. Bob legally adopted Ken when he turned eighteen and pushed Ken to become a wrestler but the money of pro wrestling grew Ken to Japan. There he trained under Funaki and Suzuki for years, learning the ins and outs of submission grappling.

In 1992, Shamrock took part in a first for the Fujiwara Gumi promotion. He was put in against champion Muay Thai fighter Don Nakaya Nielsen for a live fight, not a pre-scripted affair. Sharmock won in seconds with a keylock.

The fight was a smashing success, drew huge reaction from the crowd and created buzz around the wrestling community. This caused the young pro wrestlers Funaki, Suzuki and Shamrock question the conventional wisdom of Pro Wrestling that non-scripted fights would not sell to large audiences. Shoots, or non-scripted matches, had taken place but normally for small groups of gamblers, not for large scale consummation.

Suzuki and Funaki started their own promotion where they could test this idea of marketing real fights in pro wrestling. The rules were drawn from pro wrestling: not closed fist or elbow strikes to the head, no stomps or knees to the head on the ground, fighters are granted rope up to five escapes if they can grab the ropes when on the ground or in a submission hold and fighters were given ten-counts if they were knocked down.

The final touch was provided by wrestling guru Karl Gotch, who suggested the name Pancrase as homage to the original ancient Olympic fight sport Pankration. The first event was set September 21st, 1993 and featured names fans of fighting sports would become very familiar with in the years to come.

Titled Pancrase 1 - Yes, We Are Hybrid Wrestlers, it was the first Pro Wrestling card marketed where all the fights would be real. The founders took part in this card, Suzuki won his match by armbar for the opening of the card. The next fight featured a 28 year old Dutch kickboxer recruited to come out for this new type of event. This fight would be full of many firsts for Bas Rutten.

Finally the main event would pair Ken Shamrock against Pancarse founder Funaki. Shamrock won 6 minutes into the first round with a side choke.

Ken Shamrock vs Masakatsu Funaki Pancrase: Yes, We Are Hybrid Wrestlers 1 (via Idonotbelieveit)

Pancarse 1 was a huge success, both fans and wrestling critics hailed it as an outstanding show, Japanese MMA would never be the same. And Shamrock was about to travel to the next big hotbed of MMA when he answered an ad in a magazine for a no-holds barred, bare knuckle event in Denver, Colorado.