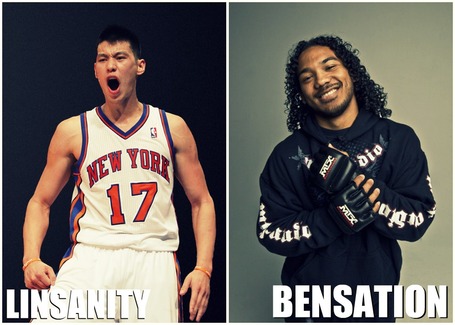 Edited and Promoted to the Front Page by Anton Tabuena

In a league haunted by corporate greed, dirty politics, entitlement attitudes and a waning, fed-up fan base, Jeremy Lin has captured the hearts of America and has made basketball cool again – all in a span of two weeks. It isn’t hard to see why Linsanity has taken over the nation. He’s the antithesis of the nasty off-court bullshit plaguing the sport. He’s the undrafted "DIII player" from Harvard, who didn’t receive a single athletic scholarship offer. The nomadic D-Leaguer, sleeping on his brother’s couch, working his ass off for an opportunity. He’s the ultimate underdog who shattered all expectations.

Ben Henderson’s career has followed a similar trajectory. From his time in the WEC to his title fight against Frankie Edgar this Saturday in Japan, I look at the similarities of the various stages of Lin and Henderson’s careers. Without further ado, LETS LINSANITY

The NBA Summer League is the showcase for future stars, where top draft picks start their highlight reels at the expense of development league players playing for minimum contracts. The 2010-2011 Summer League was supposed to be John Wall’s coming out party. But despite taking home MVP honors, it was Jeremy Lin, not Wall who had the basketball world buzzing. Undrafted out of Harvard, Lin was given a chance to play his way to a contract on the Dallas Mavericks and made the most of his opportunity. Sitting on the bench for the first two quarters, Lin was put into the game late into the 3rd quarter against the best point guard in his class. Undaunted, he frustrated Wall on both ends of the court, and by the end of the game the once vociferously pro-John wall crowd were chanting for Jeremy Lin.

Ever since WEC Lightweight Champion Jamie Varner and number 1 contender Donald Cerrone’s exciting, but controversial fight at WEC 38, MMA fans were clamoring for a rematch and proper closure to their bitter rivalry. However, Varner was not medically cleared to fight at WEC 43, so the WEC called on an up-and-coming Ben Henderson to take his place in a fight against Cerrone for the Interim WEC Lightweight Championship. While Henderson was coming off of a TKO and submission against respectable lightweights in Shane Roller and Anthony Njokuani, Cerrone was a well-rounded killer with the Muay Thai to brutalize Henderson on the feet and the BJJ acumen to submit the wrestler. Henderson was a placeholder in the Varner/Cerrone feud. He wasn’t supposed to be on Cerrone’s level and the betting lines reflected as much with Cerrone coming in as a -350 favorite. But like Lin, Henderson was undeterred by his opponent’s reputation. Cerrone locked in deep (and I don’t mean Rogan deep) submissions, but Henderson refused to lose and retaliated with crushing ground and pound. When the dust cleared Henderson was declared the winner in a closely contested FOTY candidate and the new WEC Interim Lightweight Champion.

Following Lin’s impressive Summer League performance, the Dallas Mavericks, the Los Angeles Lakers, and his hometown Golden State Warriors offered him contracts. Wanting to stay close to home, Lin accepted a minimum contract with the Warriors and developed a cult following. However, stuck in the rotation behind the ultra-talented Stephen Curry and Monte Ellis, Lin spent most of his time on the bench, competing for garbage minutes with Charlie Bell, Reggie Williams, and Acie Law. With significant minutes unavailable, Lin was sent to the NBDL where he showed flashes of brilliance and made the All NBDL Showcase First Team. Despite having a decent rookie campaign, the Warriors desperately tried to make a bid for Clippers restricted free agent DeAndre Jordan (Jordan ends up resigning with the Clippers) and waived Lin on the first day of training camp.

Henderson built on his huge interim title win with guillotine submissions over the Champion, Jamie Varner and a wildly anticipated rematch with Cerrone, effectively ending any controversy over who the real champ was. With Varner and Cerrone out of the way, Henderson needed a new challenger. Enter, Anthony Pettis, a young, dynamic, Duke Roufus trained striker. With the imminent UFC/WEC merger the stakes were higher than ever before: a place in MMA history as the main event of the final WEC card, in Henderson’s hometown, and an immediate UFC Lightweight title shot. For 24 minutes, Henderson and Pettis laid it all on the line in and engaged in a thrilling back and forth with neither man gaining a clear advantage, and then it happened. The Showtime Kick. Words can’t do it justice, and I’m not going to try. The Showtime Kick was the perfect end, the perfect exclamation point for the WEC and turned Petits from the MTV fighter to a bona fide star and Henderson from the champion to a loser.

After getting waived by his hometown team, the Houston Rockets picked Lin off waivers, only to release him to make room for center Samuel Dalembert. Once again, Lin was teamless. However, when starting New York’s Knick’s point guard Iman Shumpert was out with an injury, the Knicks picked up Lin as a third-string point guard. Upon Shumpert’s return Lin was once again sent to the NBDL where he again excelled. With just days away from his contract expiring, Lin looked to be out of a job again. But fortunately for Lin, Baron Davis’ recovery was going slower than planned, Mike Bibby and Toney Douglas were inept, and with an 8-15 record coach Mike D’Antoni was dangerously close to being fired. The Knicks’ superstar Carmelo Anthony suggested giving Jeremy Lin a chance. Desperate for an answer, D’Antoni put him in. 25 points, 7 assists, 5 rebounds, and a win over all-world point guard Deron Williams. Jeremy Lin had arrived.

While Anthony Petits was fast-tracked to the top of the division with a main event against Clay Guida, Henderson had to work his way back up in a PPV opener against Mark Bocek, a tough fighter with slick BJJ and deceptively good stand-up. As per usual, Henderson beat Bocek in thrilling fashion, with his demi-god-like submission defense on full display. Passing his first test with flying colors, Henderson was ready for his biggest challenge yet – Jim Miller.

May the Best Man Lin

Following his stunning victory over Deron Williams and his New Jersey Nets, Lin proved he was no one game wonder with wins over the Utah Jazz where he scored 28 points and dished out 8 assists and John Wall’s Washington Wizards where Lin recorded his first double-double and his first NBA dunk. Wins over the Nets, Jazz, and Wizards were nice, but next up was Kobe Bryant and the Los Angeles Lakers. When reporters asked Kobe about Lin before the game, Kobe scoffed with indignation

Firing shot after shot, lighting up Madison Square Garden with 34 points, Kobe made his message clear – he was going to deal with Lin. Unfortunately for Kobe, Lin fired back. 38 points on 56.5% shooting and the win. By night’s end everybody in the NBA knew who Lin was.

Leading up to his fight with perennial top contender Jim Miller, many expected Henderson to get ripped to shreds. It wasn’t that Henderson wasn’t good; he had an impressive UFC debut against a tough mid-level lightweight and a successful WEC career. But that was the WEC, and being elite in the WEC meant jack shit to the upper echelon of the UFC lightweight division, the deepest division in MMA. Jim Miller standup was tighter, his wrestling could counteract Henderson’s, and being a Miller, everyone knew that he was a tough SOB. He was on a seven fight win streak and Henderson was just another name to add to the mantle. He was just a better fighter. Henderson proved otherwise and dominated Jim Miller in typical Ben Henderson fashion, emphatically dispelling any notions that the WEC guys couldn’t hang against their big bad UFC brothers.

The LINSANITY: The Ignored BENSATION

Players are often defined by how "clutch" they are, their ability to rise above the nerves and the pressure and the fatigue to lead their team the victory. Like Carlos Condit’s TKO finish against Rory MacDonald and the aforementioned Showtime Kick, moments in the clutch are what differentiate stars from superstars. Some players like Chauncey Billups and Robert Horry have made entire careers off those last seconds, when everything is on the line while others like LeBron James have crumbled and folded under the spotlight. Jeremy Lin’s moment of truth came against the Toronto Raptors. Down 9 going into the 4th quarter, the Knicks battled their way to an 87-87 gridlock after a Lin three point play. With 20 seconds left on the clock the ball came back to Lin’s hands. The logical move is simple: put up a shot with about 5 seconds left and give your team an opportunity to get the rebound if you miss. Lin didn’t do that. Instead, he waited. 5…4…3 Swish. With 3 seconds on the clock and the world watching him, Lin sank the go-ahead 3 point pointer to win the game. LINSANITY became a superstar.

Riding high from his win over Jim Miller, Henderson kept the momentum going and steamrolled Clay Guida on the un-televised co-main event of the first UFC on Fox. And on the 24th, Henderson will have his own opportunity in the clutch. Like Lin, Henderson has had a remarkable journey as the underdog, shattering all the expectations. But unlike LINSANITY, the world isn’t watching Ben Henderson. Even in MMA circles, he’s been widely ignored; buried under Nick Diaz dirt and the rejuvenated welterweight division. And with UFC 144 next Saturday, and this being the fight I’ve been most excited to see this year, it’s about time we recognize the BENSATION. Yup, I went there. Fuck good conclusions they’re fucking artificial most of the time anyways.