My recent articles have covered the migration of Judo to Brazil, its transformation to Brazilian Jiu Jitsu and its evolution in the face of challenges in Vale Tudo. But we are going to return to Europe to the discipline of catch wrestling, the grappling system that developed in the middle ages.

Catch Wrestling existed not as one art but as a collect of very regionally segmented arts. The most famous and predominant is Lancashire Catch-as-Catch-Can from England, but there is also Irish Collar-And-Elbow, versions of Greco-Roman that retained some of the Pankration holds, even Indian Pelhlwani and Iranian styles of wrestling all fall under the umbrella of catch wrestling.

The growth of the Olympics and sport wrestling pushed Catch Wrestling more and more to the side. This was for a verity of reasons, safety chief among them. Submission holds increase the chance of injury, so for amateur wrestlers the risk was just great. Also the need for time limits for matches also made catch style wrestling less practical for amateurs. So Catch Wrestling became strictly for professional matches, where there was a cash prize and thus professional wrestling was born.

Karl Istaz was a wrestler born in Antwerp, Belgium. A natural talent, Karl stated wrestling at the age of eight. His family moved to Germany and he excelled in competition but his story was almost cut short by the rise of the Nazis in the 1930s. Karl was sent to a labor camp, but he attempted several escapes and was moved to different camps several times. When his camp was liberated Karl was severely malnourished and likely would have starved to death if the war had lasted any longer.

As a testament to his amazing skill, just a few years later Karl qualified for the 1948 Olympics in both Greco-Roman and Freestyle wrestling at the age of 23. He won one match in Greco, and while not a medal it was impressive feat none the less considering his physical condition just a few years before the games. At the summer games, Karl was approached by the uncle of celebrated catch wrestler Billy Robinson. Referred to as Alf, he recruited Karl to come train at Billy Riley's famous gym.

Karl trained there for several years and started appearing in Pro Wrestling matches in Europe in 1951. Pro Wrestling matches already at this time were often predetermined in outcome, called "works". Live matches or "shoots" would occur for private betting but those were not often recorded. Karl spent a decade at Riley's gym training and doing European matches.

He then moved to the United States to train with Frank Wolfe. In 1961 Karl was given the name 'Gotch' by the U.S. immigration officer which is ironic because Frank Gotch was perhaps American history's most legendary Catch Wrestler. Karl Gotch became a staple in American Pro Wrestling, but his competitive nature remained strong. Gotch had no respect for Pro Wrestlers that just did worked matches and didn't have real wrestling backgrounds. As a result, Gotch was a threat to promoters to go against the decided script. These fears of many promoters were made real in a famous backstage clash with NWA Heavyweight Champion Buddy Rogers. Gotch and Rogers fought backstage and while the cause is unknown, Roger's hand was broken in the scuffle.

This incident got Gotch black listed in the United States, so he moved on to the quickly growing Japanese Pro Wrestling scene. 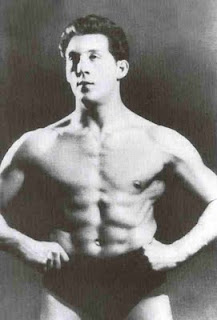 (A young Karl Gotch via 1.bp.blogspot.com)

In 1972, Gotch appeared in the first event of the New Japan Pro Wrestling promotion against Japanese star Antonio Inoki. The Japanese wrestling fans responded strongly to Gotch's athletic and competitive wrestling. Gotch appeared in matches up and down the isles of Japan and won several major titles. As more and more wrestlers flocked to learn from Gotch, his style influenced a whole generation of Japanese Pro Wrestlers.

His influence was so strong it earned him the nickname "God of Pro Wrestling" from Japanese fans. His style incorporated much of his sport wrestling background and the "German Suplex" is named in honor of Gotch. He called it the Atomic Suplex and said he learned it from Finnish Greco-Roman wrestlers.

When Gotch retired he devoted himself to training pro wrestlers. And he would pass on to his students his love of competition and real action over works.

One of those students was Gotch's first opponent in Japan, Antonio Inoki.

Inoki was a natural athlete competing at karate and track and field from a young age. He started pro wrestling at the age of seventeen and worked hard developing his grappling.

Inoki took to Gotch's wrestling style and combined it with his own personal style of karate, Kansuiryu. Inoki called his wrestling "strong style". Inoki enjoyed matching his style against others in martial arts and while many of these were works, they were forerunners to Japanese MMA. In 1976 Inoki promoted a even in which he invited several martial artists to come compete in hook and shoot matches. This event included an Olympic Judo gold medalist, a Karate champion, and a boxer. This event is often pointed to as the start of "shootfighting" in Japan. While hardly the first shoot ever, but it was the first event in Japan were that the shoot was intended to be sport.

It was another Gotch student however that would take things one step further. That same year as Inoki's shoot tournament a young man named Satoru Sayama debuted as a professional wrestler. Sayama was destine to become known as The Tiger Mask and be launched into the pantheon of Japanese Wrestling greats. 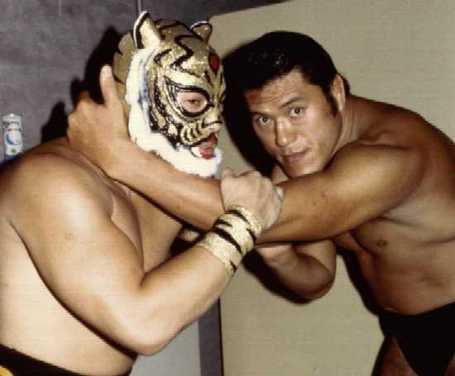 Sayama met Gotch after falling ill working in Mexico. Gotch trained Sayama but the two never really got along. Sayama was a gym bully, and Gotch felt Sayama only trained with Gotch to get his connections to Japanese shows.

Sayama clashed with many of his contemporaries. These clashes resulted in excellent fan reaction for grudge matches but left Sayama frustrated. He hated the back stage politics of picking starts and winners of worked matches.

In 1985 Sayama retired from Pro Wrestling, but his frustration hadn't killed his love for competition.

In 1986, Sayama took matters into his own hands and decided to follow Inoki's lead and form a sport out of shoot wrestling matches. He wanted to create a professional wrestling circuit with no works. The first event he held was an amateur event and he called the organization Shooto.

Originally there were no gloves, so only punches to the body were allowed but open hand strikes could be directed to the head, and no strikes were allowed on the ground. Kicks and knees were allowed to any part of the body and all submission holds were legal. Fighters who were knocked down were given an eight count to recover.

In 1989, Shooto held its first professional event, and the sport began to grow quickly in Japan. Gloves were added and punches to the head became legal. A developmental system was put in place, where fighters could work their way up from being amateurs to top level professionals.

Then there is Class B professional who fight full contact for for two, five minute rounds and Class A professionals fight for three rounds. By the early 1990s, Shooto was a thriving league that was beginning to strongly resemble modern MMA.

(Shooting - vintage footage from Japan in the early 1990's via fenrismaelstrom)

Other Karl Gotch students would go on to have major impacts in the development of Japanese MMA. Akira Maeda would go on to found a Pro Wrestling promotion based on Inoki's "strong style" wrestling that in the early 1990's would transform into the Mixed Martial Arts promotion RINGS, which would be a very successful promotion. They would go on to feature fights that included names like Randy Couture, Dan Henderson, Fedor Emeliankenko, Antonio Rodrigo Nogueira, Alistar Overeem and many more great fighters starting their careers.

And it was Yoshiaki Fujiwara, widely considered Gotch's best student, who would introduce his own students Masaktsu Funaki and Minoru Suzuki to Gotch. These two were looking to combine the spectacle of pro wrestling with the excitement of sport.

When they were at a loss for a name, Gotch suggested calling the new promotion Pancrase as a way of honoring the orginal combat sport of the Greeks, Pankration. And Pancrase would go on to be the best and most successful of these early Japanese MMA promotions and create stars known throughout the MMA world, but that is a story for another article.

Special Thanks to K.J. Gould and Nate Wilcox, without their help this Pro Westling illiterate would have been well and throughly lost.