Ring of Combat 39 Preview And Predictions

Share All sharing options for: Ring of Combat 39 Preview And Predictions 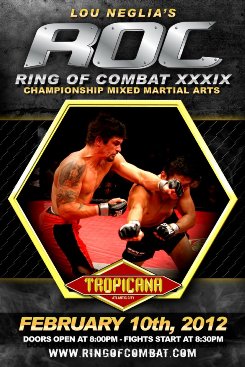 The card will air live on GFL.tv at 8:30 PM ET, cost is $14.99. If you're unable to follow along with the action on GFL.tv, BloodyElbow.com will provide live results and play-by-play at that time.

2012 World MMA Scouting Report prospect Tom DeBlass will attempt to defend his light heavyweight strap on Friday night for the second time as he battles heavyweight power puncher Randy ‘The Wolf' Smith in the main event. DeBlass was originally scheduled to battle Tiger Schulmann's Carlos Brooks (3-1), but an injury forced him out of the bout and opened up an opportunity for Smith to play spoiler on short notice.

Smith's track record of knocking out opponents is a concern, but DeBlass should find comfort in knowing he has fought far tougher competition despite only fighting in six professional bouts to Smith's twenty-four career appearances. Smith isn't the sharpest defensive fighter either, and his record is a clear indication that he's fallen prey to more technically sound competition. DeBlass fits that description, highly-credentialed on the ground while improving by leaps and bounds in the stand-up department. The intrigue here is the enormous weight difference and the fact that DeBlass has been on a training surge as of late. We'll likely get the best version of DeBlass we've ever seen, but he's up against a mediocre fighter who may have nearly 40 lbs. on him by fight time. Technique will beat size on Friday night. Tom DeBlass via submission

Your favorite smoker, TUF 12's Jeff Lentz, returns to his roots on Friday night after running into a brick wall when the opportunity of a lifetime called. Despite losing to future WEC'er Anthony Morrison at Ring of Combat 27 in November of ‘09, Lentz was selected to appear on The Ultimate Fighter reality series, beating Daniel Head by rear naked choke during the elimination round to get into the house. Once in the house, however, Lentz was spotlighted by the cameras, drinking and smoking with complete disregard for his upcoming bout against Alex Cacares. Cacares beat Lentz in the second round by triangle choke.

Since the show, Lentz has recorded a 2-1-1 record, losing by unanimous decision to UFC veteran Ryan Roberts while beating WEC and Strikeforce veteran Anthony Leone in a lone stint with Bellator in May. Jeff is an aggressive, pressuring menace inside the cage, utilizing a karate background that's been supplemented with submissions.

Moljo isn't exactly a cakewalk for Lentz in this showdown. Despite his .500 record, Moljo is a capable wrestler/grappler who can put opponents in danger repeatedly off his back. It would be keen for Lentz to maintain range and pepper Moljo with strikes, avoiding any ground exchanges that up the chances for Moljo to pull off a win. I think that's exactly how Lentz plays it, winning by decision. Jeff Lentz via unanimous decision

Catchweight (180 lbs.): Pete "Drago" Sell (9-6) vs. Mitch Whitesel (17-20): Whitesel might have almost 40 fights to his name, but it isn't good when roughly half of them have been in the loss column. Despite such a lopsided record, Whitesel has been in the cage with the who's who of future UFC fighters. Unfortunately, he didn't beat any of them, and it's likely he won't be beating a former UFC fighter in Pete Sell on Friday night. If Whitesel's lacking submission defense wasn't enough, his chin is going to have a hard time withstanding Sell's power. In either case, Sell wins handily inside the first frame. Pete Sell via TKO, Round 1

Middleweight: Uriah Hall (5-2) vs. Daniel Akinyemi (2-0): Not surprisingly, nobody has any clue who Daniel Akinyemi is... unless you happened to watch BET's Iron Ring. In the show's finale, he defeated Bellator's Brian Rogers by decision, notching his first win on his professional record. Unfortunately, Akinyemi hasn't been very active, taking his next fight over two-and-a-half years later, knocking out Rich Bianchi in two minutes flat. Fast forward to today, and it's been over a year since Akinyemi has been in the cage, and his opponent is as tough as they come.

2011 World MMA Middleweight Scouting Report prospect Uriah Hall hasn't been as active as one would hope. After losses to UFC veterans Chris Weidman and Constantinos Philippou, Hall knocked out Aung La Nsang in April at Ring of Combat 35. He hasn't fought since. Undoubtedly, the Tiger Schulmann product will be chomping at the bit to show a rookie the kind of power he brings with his brand of Muay Thai. Akinyemi is in over his head here unless he's been training extensively during his time away. Hall beats him down, finishing by the second round. Uriah Hall via TKO

Light Heavyweight: Ed Gordon (2-0) vs. David Tkeshelashvili (8-4): Serra-Longo Fight Team member Ed Gordon will skip a few steps in his progression toward the top when he take on M-1 veteran David Tkeshelashvili in light heavyweight combat. Gordon hasn't fought the stiffest competition since making his debut at June, but that's to be expected due to his novice status. But this bout could prove to be his undoing as the brutish strength and grappling skills of Tkeshelashvili might be too much. Gordon has a great training camp, however, and his athletic background in both football and wrestling have put some buzz behind him. Ed Gordon via decision

Catchweight (150 lbs.): Lester Caslow (7-5) vs. Duane van Helvoirt (8-4): Caslow is the far more experienced fighter, sharing the cage with veterans such Kenny Foster, Andy Main, Felipe Arantes, Daniel Straus, Eddie Fyvie, and Pat Audinwood. Helvoirt is a Dutch grappling whiz, but I think that's tough for a lot of fight fans to digest. A Dutch grappling whiz? Is that possible? We'll find out. I'll take Caslow due to his experience, but there is definitely some intrigue in seeing what Helvoirt can do. Lester Caslow via decision

Featherweight: Jarred Mercado (4-0) vs. Rafael Fagundes Machado (4-8): Mercado is one of the Grudge Training Center's more impressive rookies, sporting three wins in the Colorado regional ranks before turning his eye on the Northeast regional scene. He hasn't been overly convincing yet, but Fagundes isn't going to provide the stiff challenge Mercado needs. Jarred Mercado via submission, Round 1

Featherweight: James Jenkins (4-0) vs. Dwayne Shelton (9-9-1): Another Serra-Longo prospect to keep an eye on is James Jenkins, who has finished three of his four opponents in the first round. Shelton is a layup win for him. James Jenkins via submission, Round 1

Lightweight: Frankie Perez (2-0) vs. Jeremy Uy (0-0): The 22-year-old Perez is the hot prospect here, a Ricardo Almeida-trained submission machine who blew through his first two tests with first round finishes. He wins again. Frankie Perez via submission, Round 1