UFC on Fox 5 Photos: Ben Henderson fought with a toothpick in his mouth against Nate Diaz

At UFC on FOX 5, Ben Henderson dominated Nate Diaz for 25 minutes while he had a toothpick inside his mouth the whole time. Here are a few photos of it.

Share All sharing options for: UFC on Fox 5 Photos: Ben Henderson fought with a toothpick in his mouth against Nate Diaz

After Ben Henderson put on a brilliant display and defended his lightweight title at UFC on Fox 5, Joe Rogan noticed a toothpick that was in the champion's mouth while he was celebrating. When asked if he had it in the entire fight, Henderson subsequently denied it, saying "No, that's dangerous".

The topic was brought up again at the post-fight press conference, and Henderson was a bit coy saying "I cannot confirm nor deny that. I normally do. I have been through practices, and when I spar, and when I fight. It’s a bad habit, but whatever. I have gotten away with it so far."

Dave Sholler, who led the presser in the absence of Dana White did say that Henderson was just kidding. "I’m sure the commission wouldn’t want a piece of wood in his mouth during the fight... By the way guys, I'm pretty sure Ben made it clear he was joking. Weird, but joking."

Well, as shown on the screen grab above though, the UFC champion really did have a toothpick on his mouth during the fight and it was also seen on different occasions throughout the 25-minute fight.

The photo above is Henderson celebrating right after the bout ended, and below is another screen grab in between the earlier rounds. Shortly after, Henderson's cornerman told him to "put that toothpick in your mouth," as they likely didn't want the athletic commission to see that small, yet illegal strip of wood.

During the presser, Diaz was also asked about his thoughts on fighting a guy with a toothpick in his mouth, and he simply said, "I don’t know if he did, but that’s weird." 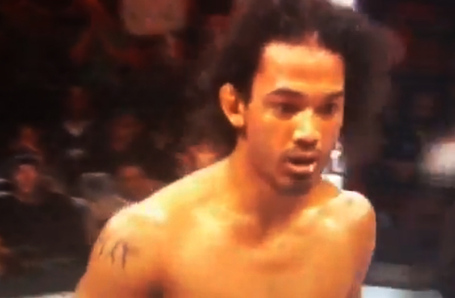