While the UFC experienced success after success in the 1990's, storm clouds had gathered as enemies of the sport sought to shut it down. It would fall mainly to a referee and a commentator to take a stand and help adjust to sport so it could survive to maturity.

Share All sharing options for: MMA Origins: The UFC's Fight for Survival

The early UFC faced severe battles over rules and regulations, both internally and externally. The very first UFC event took place in Colorado, which did not have a state boxing commission at the time, and therefore it fell to the promotion to create their own rules and enforce them.

The development of these rules was not a simple process as many people in the origination had input. There were many different voices in that discussion. There was Rorion Gracie, the driving force behind the UFC; Art Davie, the promoter; and the leadership of Semaphore Entertainment Group (SEG), a New York based PPV company. Rorion pushed for minimal rules, he wished to market the UFC as being as close to a real fight as possible and replicate the success of Vale Tudo in Brazil, while the others tried to reconcile that view with the realties of holding a sporting event in the United States. 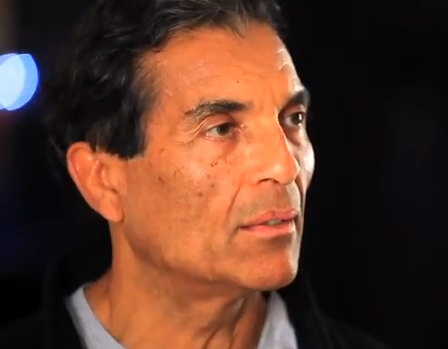 The others compromised with Rorion and UFC 1 rules were set. Fights had an unlimited number of five-minute rounds. Eye gouging, biting, and groin strikes were designated as illegal techniques. Referees were hired, but they were told that they had no power to stop a fight. The only ways a fight could stop was by a fighter tapping out or by a fighter's corner throwing in the towel. Rorion also insisted that no gloves be worn by any fighters and also made knuckle protecting hand wraps illegal, so that the striker's hands would not be protected. There were no weight classes and there were no medical tests beyond a simple blood test and physical to determine the fighter's fitness to compete.

UFC 1 was a success, both from a business point of view and for the rule makers. None of the fights passed the 5 minute mark, which lead to the misconception that there were no time limits. Rorion was upset when referee Alberto Barreto stopped the first fight of the night when Gerard Gordau kicked Teila Tuli in the head, causing his teeth to come flying out. Rorion shouted instructions over the cage for Barreto to bring Tuli to his corner and have the doctor look at him. When the doctor declared Tuli was unfit to continue, his corner threw in the towel.

Rorion's displeasure caused him to look for new options for a referee at UFC 2, and he recruited his own student and L.A. police officer John McCarthy, who would become the primary writer of rules for the UFC moving forward, and he began tweaking the rules right away.

Several of the applicants for UFC 2 complained that groin strikes were central to their art and McCarthy convinced Rorion to make them legal, mostly on the basis of taking away any possible excuses. Another change to the rules was the removal of rounds, after the first event both Rorion and SEG leadership no longer saw a need for them.

This was the UFC at its most brutal, with a bare minimum of rules and its battle for survival started almost immediately. The UFC attempted to return to the McNichols Sports Arena, but the mayor of Denver moved to block them and the UFC was forced to switch to the smaller Mammoth Gardens venue. In the unaired prelims Orlando Wiet put an excessive beating on Robert Lucarelli. When Lucarelli was too disoriented to tap and his corner did not recognize the seriousness of the situation, McCarthy was able to coax Lucarelli's corner into throwing in the towel, but only after their fighter had taken significant and unnecessary abuse.

McCarthy was shaken by the incident and approached Rorion, demanding the ability to stop the fight if a fighter was "no longer able to intelligently defend himself". Rorion relented and from that point onward referees had the power to stop matches. The UFC had successfully held their second event despite the setbacks but storm clouds gathered as the UFC faced many legal battles in the coming years.

Larger political forces were at work in the United States in the 1990's. Cable TV had been growing rapidly for decades and the 1980s witnessed a period of deregulation. As the programming continued to grow concerns began to rise about the levels of violence and sexuality on cable TV. The Federal Government began to pass legislation regulating what could legally be on television and one of the leaders of that charge was Republican Senator John McCain.

While many cite McCain's ties to boxing as why he began targeting the UFC, this was not the case. He also slapped boxing with regulations and led a consistent campaign against violence and sex on television. Efforts like his eventual lead Congress to the introduction of the "V" chip in 1996. The UFC was simply low hanging political fruit, an easy point that everyone could rally against. 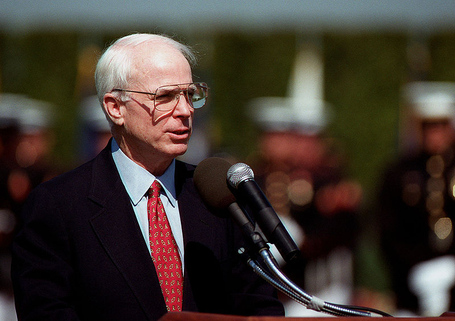 While the UFC was making powerful enemies, at UFC 4 it also gained one of its strongest friends. Greco-Roman Wrestling Olympic gold medalist Jeff Blatnick joined the UFC commentating crew for that event and was smitten by the sport when the much smaller Royce Gracie defeated the larger and stronger Dan Severn, a feat that Blatnick thought impossible. He and McCarthy struck up a friendship and, together with SEG's Bob Meyrowitz, they would become the sport's most stalwart defenders.

McCarthy and Blatnick together would slowly adjust the UFC rules to make it more acceptable to state and local governments, a job that became much easier when Rorion Gracie departed after the addition of rounds and time limits at UFC 5.

McCarthy and Blatnick noticed that one aspect that many found most objectionable about MMA was the lack of gloves; so right after Rorion's departure they made gloves legal but not required at UFC 6, and by UFC 14 gloves were mandatory. Things seemed to be looking up for the UFC as they were able to put on a show in the state of New York, the city of Buffalo playing host to UFC 7, but it was then that things started to come apart.

UFC 8 was set to take place in Puerto Rico but it took fierce court battles to actually put on the show and then after the event, local laws were passed banning Ultimate Fighting in all of Puerto Rico.

This was the first of many legal battles with local governments over the legality of UFC events. The pressure increased as Senator McCain began to push local governments to ban all Ultimate Fighting events. Together McCarthy and Blatnick traveled to countless courtrooms and local government hearings, pleading the case of the sport they loved. They quickly realized that ignorance was their greatest foe, all the knowledge local politicians possessed of martial arts came from movies and urban myth. Many believed that contestants in the UFC could kill with a touch and that events resulted in deaths.

Blatnick used his credibility as an Olympian to help sway lawmakers and help change minds about the UFC. He portrayed the sport as simply the combination of the Olympic combat sports: boxing, judo, wrestling, and taekwondo. He also began using the term "Mixed Martial Arts", believing the title of "No Holds Barred" hurt the sport at these hearings.

In Detroit, UFC 9 faced serious legal roadblocks and while the UFC again was able to put on their show, the judge of the case prohibited close fist punches. While no action was ever taken against any fighters, the court order did scare Ken Shamrock and Dan Severn enough to not engage in meaningful combat during their title fight.

Then a rival promotion, Extreme Fighting, announced they wanted to host a show in Madison Square Garden, promoting a knee jerk reaction by New York politicians that resulted in No Holds Barred fighting being banned across the state.

McCarthy and Blatnick recognized the sport was in serious trouble and that changes needed to be made. Rule adjustments were being made almost every event, many of them to make the sport more acceptable. McCarthy removed groin shots, citing that beyond the Keith Hackney/Jon Son fight they had never been a major factor in a match. Similar rules were made, outlawing techniques not often used but whose outlawing would make it seem the UFC was tightly regulated, like pressure points attacks. Other rule changes were more related to competition and included the outlawing of grabbing the cage, sticking fingers in cuts, strikes to the back of the head, small joint manipulation, and fish hooking. 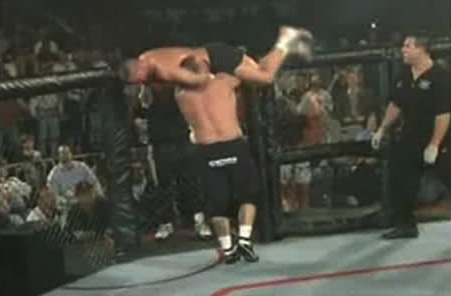 John McCarthy (right) refereeing a match at Ultimate Ultimate 1996 in which Cal Worsham is almost thrown from the cage.

Blatnick was named Commissioner of the UFC after UFC 17 and given broad powers concerning rules and regulations. He tightened up medical requirements for UFC events, making them the strictest in all of combat sports for a time. He and McCarthy both created the original criteria for MMA judging that would eventually be adopted into the Unified Rules of MMA.

Originally they wished to include damage as the primary criteria for judging, but other voices in the industry convinced they that that would do more harm than good considering the delicate position the UFC was already in. So instead they listed "Effective Striking" and "Effective Grappling" along with Aggression and Octagon Control as their judging criteria.

Weight classes were another move meant to help make the UFC more acceptable. UFC 12 debuted the new UFC Heavyweight class (200+ lbs) and Lightweight class (199- lbs) divisions, and Mark Coleman winning the first UFC Heavyweight Championship. And despite the UFC's legal problems in finding a location for UFC 12 the event turned in an excellent PPV buy rate.

Gates were low, but the money from PPV was allowing the UFC to continue on. Then in 1997, mere days after UFC 12, Leo Hindrey took over as CEO at the TCI cable company and immediately canceled all UFC broadcasts. Time Warner then followed suit, and suddenly the UFC had lost 27 million households. Fans of the UFC could only watch on satellite or wait for VHS tapes to be released for sale and this was huge blow to the UFC's bottom line.

This heralded a time that would be known as the Dark Ages of the UFC. Their profits disappeared, the star fighters left for greener pastures, and it looked like the sport was about to die. However in this darkness new stars emerged that would help not just help the sport regain ground but push it forward.

I'd like the thank the following people as I drew heavily on the following sources heavily for this article. If you're interested in learning more about MMA history and development of rules and regulation I highly recommend them.

John McCarthy, Loretta Hunt Let's Get It On!: The Making of MMA and Its Ultimate Referee