Cain Velasquez's heavy hands and hard kicks have led to the belief that he is an elite heavyweight striker. Today we look at just how often Cain gets caught.

There seems in this sport to be a great desire to overstate a fighter's stand up competence based only on the result of his fights and not what actually takes place in them. Cain Velasquez is consistently touted as a great striker with a complete striking skill set - in fact a great deal was made of this ahead of his first meeting with Dos Santos. In truth Junior Dos Santos is someone who understands striking and sets up hard offensive salvos and counters with pot shots and feints early in a match. Cain Velasquez is someone who follows instructions very well and throws his strikes in exactly the ways he has been told to throw them, without really thinking about building to an end game. It is the difference between playing chess by weighing up all the likely responses of the opponent to each threat presented by the player, and playing with a set series of moves regardless of the opponents actions.

Unlike their digital counterparts in the popular video game UFC Undisputed real fighters do not have offensive striking and defensive striking attributes because offense and defense are not two separate disciplines. In fact it is on offense that a fighter must keep sound defensive form most of all to avoid running on to a counter with his hands down and his chin out like this unfortunate soul. Cain Velasquez is one of a large group of fighters who are consistently touted as great strikers but make basic technical mistakes, often causing them to run on to punches.

The two greatest myths around Cain Velasquez are that he has a weak chin and that he is pillow fisted. His record and knockdowns serve to disprove the second, but I will disprove the first by demonstrating just how often Cain gets hit while he's moving in.

What I have affectionately termed 'Rashad Evans syndrome' is the habit of moving one's head around constantly until actually attempting an attack, where upon one's head comes straight up. It could just as easy be called Frank Mir syndrome, Diego Sanchez syndrome, or any number of other things, but Rashad Evan's famous loss to Lyoto Machida as Evans dived forward with his head upright into a punch is probably the best high profile example of this fault.

Cain Velasquez suffers from this ailment as well and is consequently an easy man to catch coming in - particularly in the early going of a fight. In his first UFC bout against Brad Morris, Velasquez seemed to simply eat Morris' punches until he landed a left hook as Morris was coming in to floor his opponent. Most of Cain's faults sneak in due to his hyper aggressive mind set - as he wades toward his opponent and attacks with his head bolt upright he is easy to strike. 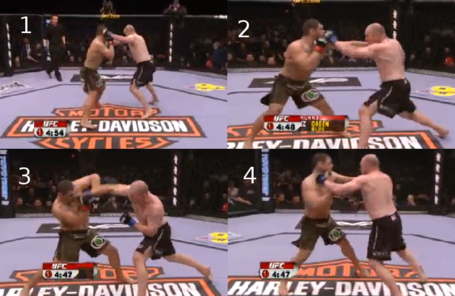 1. Cain is caught with a leaping left hook.

2. Cain eats a jab as he attempts a jab.

3. Which is followed by a right straight.

Notice that Cain's right hand is low enough that Morris can land the left hook on Velasquez's neck. I am sure there are many fans out there thinking that it is unfair to critique this small hole in Velasquez's first showing but it is one which has stayed with him long after the departure of "octagon jitters". Cheick Kongo's punching game is not especially sound - he won most of his kickboxing matches with his nice kicks and his frightening double collar tie - but he was able to pick off Cain twice in exactly the same way by exploiting Cain's upright posture as the latter ran in. Notice in the stills below that Kongo punches with his feet level underneath him (making it difficult to generate power) and while looking away - but is still accurate because Velasquez's head doesn't move off line. Kongo's striking pedigree meant nothing here - almost anyone can be taught to move their head and punch back. Check out the gifs here.

Even in Velasquez's dominating performance over Brock Lesnar he ate a couple of hard jabs square in the mouth as he ran in with his head high. Certainly they had no effect on the outcome of the fight but they could easily be landed by someone who actually had an idea of how to box instead of Lesnar and become a problem for Cain.

This is not a hard fault to exploit and I am certain that once Cain begins to find confidence on his feet again we will see him eat more shots from lesser fighters until he learns to move his head as he punches, not before and after.

Continuing the theme there exist technical faults in Velasquez's kicking game which are fairly easy to exploit if trained for. Velasquez has wonderfully hard kicks but he almost always attempts them from directly in front of his opponent while bolt upright. When kicking it is always a good idea to step off line and to "lay down" away from the opponent's rear hand, to avoid eating a hard counter punch. Even some of the greats of kickboxing have been caught with this counter at some point and it is such a devastating way to be hit that they all spend no insignificant amount of time working on stepping out before kicking.

Against Ben Rothwell, Velasquez ate some hard counters because of his kicking from directly in front of Rothwell. 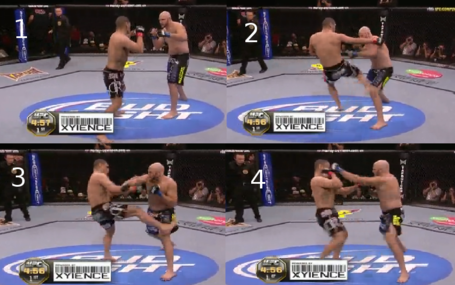 In the opening seconds Velasquez attempted a kick and was met with a glancing right followed by a left hook. 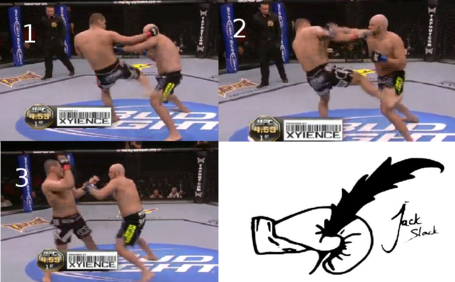 Then seconds later it happened again, but this time Rothwell connected clean with a right hand (still 2 below).

Every time Cain kicked against Junior dos Santos he was met with similar attempts to counter. Dos Santos has always enjoyed jamming his opponents kicks with punches, and Velasquez avoided being floored as he kicked in the same way that Frank Mir was, but Velasquez has some of the hardest kicks in the division and with the simple re-examination of his technique to keep himself out of harms way, he could add a punishing weapon which could work well against Dos Santos' lead leg turned in stance (more on that in the upcoming Killing the King: Junior dos Santos).

Cain Velasquez's technical issues ultimately all stem from his over aggression. Any time an opponent starts punching at him he immediately ducks and starts swinging to counter - when the great counter fighters know that it is often best to let the opponent hit air until you have his timing and quirks recognized. Consequently Cain sometimes ducks and stands up in to hard punches from opponents who have no business getting near him - such as Antonio Rodrigo Nogueira. In his bout with Ben Rothwell, Cain was so eager to stay on offense that he ducked directly into a hard uppercut as he attacked Rothwell.

Cain's over aggression is actually something which is very attractive in a student because he is not simply swinging - he wants to counter as he understands that this is the area of the striking game in which the most damaging strikes are landed. It is also however the most difficult area of the game to master. Ultimately Junior dos Santos was able to knock Cain out because Cain was attempting to counter him. Here is an excerpt from Fight Like Dos Santos: The Right Body Straight which sums up how Cain's desire to keep his hands moving cost him the bout.

Of the 7 significant strikes that Dos Santos scored in his fight with Cain Velasquez, two were powerful right straights to the body, and one was a probing jab to the solar plexus and one was a front kick to the midsection. This simple attacking of Velasquez's left floating rib with Dos Santos' right straight was enough to draw the inexperienced Velasquez's hand out of position. Having crouched and ducked his head twice for a right straight to the body, the third time Dos Santos dropped his weight, he was able to connect a swinging right over the top of Velasquez's lowered defense. It was far from a pefect punch, in fact it was technically hideous - connecting with the thumb and little else, at the end of a fully extended arm - but the set up was world class. 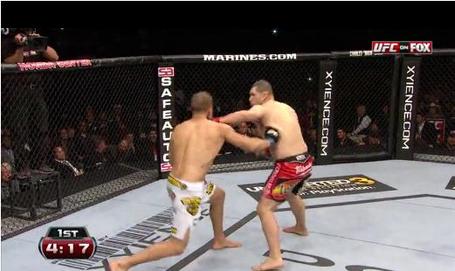 Dos Santos does not often use hooks to the body, and is known somewhat as a headhunter, but his right straight to the body is an excellent way to draw opponents out of position. Arguably the hardest hitter in the heavyweight division, it will be hard for any heavyweight to ignore Dos Santos pot-shotting their midriff. Furthermore, Dos Santos' head movement toward the opponent's right hand as he throws the right straight baits the opponent into throwing a punch of his own. Notice in the above picture, of the right straight to the body that Dos Santos throws immediately before the knockout overhand, that Cain is punching to where he feels Dos Santos' head will be. This led to Dos Santos' overhand looping over the extending arm of Velasquez and landing in a "Cross Counter", assuring the knockout.

Cain Velasquez's desire to counter at all costs led him to throwing weak jabs across himself in exchange for hard punches from Cigano. His bout with Antonio Silva showed us absolutely nothing of Cain's striking and whether he has edited any of the holes, which makes it hard to get excited about Cain's chances on the feet in the rematch. Stay tuned to my SB Nation blog page for the upcoming Killing the King: Junior dos Santos and more UFC 155 excitement.