Jack Slack Breaks Down The Ultimate Fighter Finale: Barry vs. del Rosario and Nelson vs. Mitrione

We look at the heavyweight finishes from The Ultimate Fighter 16 Finale including Pat Barry vs. Shane del Rosario and Roy Nelson vs. Matt Mitrione,

Share All sharing options for: Jack Slack Breaks Down The Ultimate Fighter Finale: Barry vs. del Rosario and Nelson vs. Mitrione

As another series of a reality show most avoid watching limped over the finish line we were treated to a surprisingly exciting and heavy breathing free couple of heavyweight bouts - both of which were finished by knockout. We'll jump straight into the analysis with Pat Barry's uncharacteristically submission savvy performance against Shane Del Rosario. After a first round in which Barry fended off chokes and an armbar surprisingly well (fans were worried he would be tapped out for a second time to a rear naked chokes without his opponent even having his hooks in from the back) Barry came out for the second round and baited Del Rosario into a looping counter left punch.

As Barry chased Del Rosario to the fence, he found himself in a lose clinch, used a swinging left hook to free himself and take an angle. Barry followed with a right hook which entered straight through the middle of Del Rosario's guard. Gif of that here. 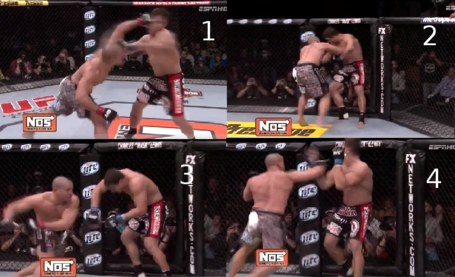 1. Barry uses a left swing to catch Del Rosario as the latter chases him.

2. Barry chases the wobbled Del Rosario to the fence and winds up in a loose clinch.

3. Barry uses a swinging left hook over the back of Del Rosario's head to free himself from the clinch and finds himself far to the left of Del Rosario.

4. This allows Barry's right hook to enter through the middle of Del Rosario's guard rather than from the side.

Now Barry has always been a wild swinger - so whether he took his angle deliberately or not is up for debate, but if he didn't this is a technique which he should certainly look into performing more. Mike Tyson's modus operandi when entering exchanges was to exit to his left and line up a right hook that would strike his opponent from the front - where it is difficult to defend - rather than from the side, into his opponent's guard.

Notice here, against Marvis Frazier, how Tyson begins to move left, ending up in perfect position to land right hands.

The second big heavyweight finish of the night came from Roy Nelson against Matt Mitrione. Much has been made of the combination Nelson used to finish the fight but in truth it was Mitrione's poor understanding of footwork that was his undoing. Throughout the bout Mitrione - a southpaw - kept placing his lead foot inside of Nelson's lead foot - the exact opposite of basic southpaw strategy.This can be used to set up the lead hook - as Andre Ward did against Chad Dawson a few months back - but Mitrione was attempting to land left handed strikes and left roundhouse kicks.

Notice below how Mitrione attempts two roundhouse kicks with his lead foot inside of Nelson's and can get little power on them because his hips cannot turn through his target. This makes his kicks easy to muffle and Nelson bullrushes him into a clinch against the fence. 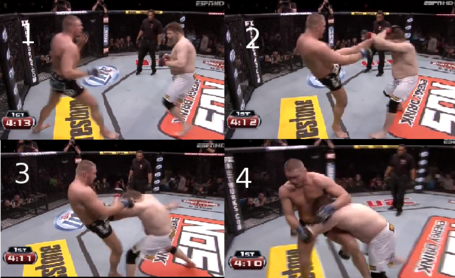 Watching an experienced southpaw kicker such as Yodsanklai Fairtex or Giorgio Petrosyan you will notice that when they want to land a rear leg roundhouse kick or a rear handed punch they always make sure that their foot is outside of their opponents - or at least level - certainly not inside.

As the bout progressed Mitrione's continuing to place his lead foot inside Nelson's continued to work against him. I wrote a great deal on the concepts of fighting southpaw vs orthodox or vice versa in my southpaw guide but to simplify it enormously - the man with his lead foot on the outside can hit with his lead and rear hands, where the man with his foot on the inside is only in position to throw his lead hand without stretching across himself and losing power.

Mitrione's decision to continue placing his lead foot on the inside seems to have been to do with wanting to land his lead hook, but it is still possible to land a lead hook with your lead foot on the outside - and Nelson began using his to set up a hard right hand. 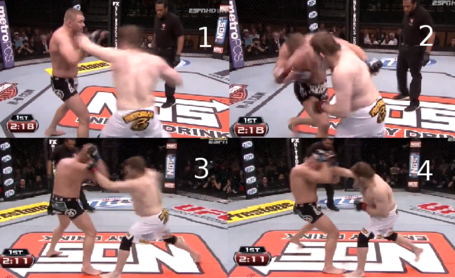 1. Nelson lands a left hook, with his lead foot outside of Mitrione's.

Following the second combination above Mitrione backed up, flustered, and attempted to keep Nelson off of him with a swinging left - Nelson's right uppercut connected before Mitrione's swing and a left hook followed shortly after - felling Mitrione. Check out the gif. 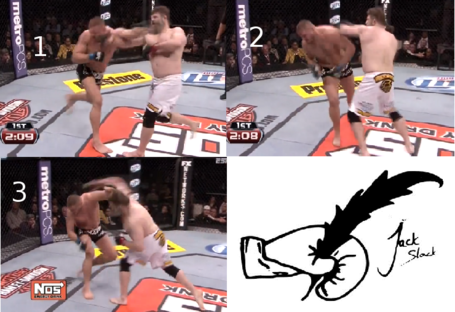 20 of the world's top strikers from boxing, kickboxing and MMA have their techniques dissected in Jack Slack's first ebook,Advanced Striking.