Kicking is becoming a new force in MMA - the champion is no longer the guy with a sprawl and knockout power, but the man who has the kicks to keep the bout at range. Jack Slack lists some of his favourite kickers and their technical querks.

Kicking in mixed martial arts has gone through a great evolution since the early days when the only fighters who would attempt it were pure kickboxers. These kickboxers would then get taken down and submitted or have to hug from closed guard until the referee restarted the bout on the feet. Once cross training became a common occurrence, strikers learned to sprawl and (some) wrestlers learned to kick. Now kicking is a common feature that occurs in almost every bout on a major MMA card. That does not mean that all kicks are effective - in fact a great many are a colossal waste of effort or simply lead to a fighter getting taken down.

On the whole though kicking is becoming a new force in MMA - the champion is no longer the guy with a sprawl and knockout power, but the guy who has the kicks to keep the bout at range. Jon Jones, Anderson Silva, Jose Aldo, Dominik Cruz and Benson Henderson are all fighters who use kicks to limit the number of engagements a round - thereby limiting the number of times they are forced to defend punches or takedowns. Watching Jon Jones against Rashad Evans or Quinton Jackson, or Anderson Silva versus Demian Maia it is clear that dangerous opponents can have their skills nullified if they are kept at kicking range but aren't adept in the art of kicking.

In today's article I want to pay homage to some of the best kickers in MMA. Some will be here for the sheer volume of kicks they throw, others for their inventiveness, and others for their significance in the evolution of striking in MMA. There's only so many I can write about but here are a few men who I feel use or used kicks especially well.

On this list because: Fights like a character from a video game. The vast majority of Cung's offensive output is made up of kicking techniques.

Cung Le is an interesting case because he spent the majority of his Sanshou career out-wrestling kickboxers, then came to the cage and looked leagues ahead of most in the striking department. I have gone on record before as saying Le's hands are pretty mediocre, as is his defense, so Le's main method of defending himself and winning fights has been to go on the offence with hard kicks right from the start.

Le's kick heavy game is incredibly labor intensive - causing him to gas in recent bouts - but his combinations and techniques have been wonderfully inventive over the years. Cung Le's side kick, for example, was one of the first to be used effectively in MMA - ramrodding out into his opponent any time they attempted to close the distance.

Le's ability to recover from missed kicks is also an excellent quality for a striker to possess. Notice the spinning backfists off of kicks in the below highlight. Cung dropped Wanderlei Silva with a similar technique.

On this list because: Rutten was the first to apply kicks successfully and consistently in top level MMA competition.

Pancrase was one of the first organisations to offer a contest that is recognizable to us today as a mixed martial arts bout. Founded by Masakatsu Funaki and Minoru Suzuki; both catch wrestlers, the organisation quickly filled it's roster with Japanese wrestlers and a couple from overseas. Rutten came to represent the striking martial arts in Pancrase; coming into the organization after a stint in Muay Thai competition. Rutten boasted an impressive record in Muay Thai but was not the most technical of fighters.

What Rutten quickly came to learn was that his in your face, brawling style would either get him a quick knockout win or taken to the mat and submitted. Throughout his Pancrase career Rutten's striking output slowed and he became a more patient fighter. Never developing takedown defense that was worth writing home about, Rutten became one of the first effective kickers in mixed martial arts competition by adopting two very unique strategies.

The first was to teep or push kick his opponent as hard as he could into the ropes, forcing them to bounce back as he ran in with palm strikes and punches. This assured that his opponent's feet were not in stance and that they could not 1) shoot for a takedown or 2) strike back. Rutten did this to wrestlers and strikers alike, performing the move on Maurice Smith and Guy Mezger as well - both far more accomplished kickboxers than Rutten. Rutten performs this technique at about 0:28 of the highlight below.

Rutten's second great trick to landing kicks effectively was to always follow with a palm strike while standing on one leg. If the kick were caught he could stun his opponent with the palm strikes (as he famously did to Frank Shamrock, resulting in Frank stumbling to the ropes and both men falling out of the ring), and if the kick weren't caught he could place it down behind him and continue a combination. Count the number of strikes thrown while on one leg in any Bas Rutten highlight and it will probably be higher than most fighters throw off of one leg in their career.

Bas is credited as being one of the first truly rounded fighters, but in truth he never had much of a positional Brazilian Jiu Jitsu game or a great sprawl. It was when Rutten slowed down his output and found times to swarm on his opponents, rather than simply attempting to knock them out every moment that the fight was on the feet, that Rutten became a far better mixed martial arts competitor and a pioneer of kicking in the sport.

On this list because: Proved the high kick to be effective in MMA consistently.

If you didn't know this man was going to be on the list, you don't know enough about mixed martial arts. After a moderately successful run in K-1, though never achieving a title, Cro Cop transferred to MMA full time under the PRIDE FC banner. It was there that Mirko showed just how functional kicks could be in mixed martial arts, and more memorably how a high kick was more than a once in a career occurrence. At one point everyone in the world knew what Mirko Cro Cop was going to do, and nobody could stop him from kicking them in the head anyway.

The point at which his opponents knew what was coming, however, was the start of a decline for Cro Cop in my eyes. Mirko was always known for his high kicks but he was never predictable at his best. Whether he was using the threat of the left high kick to land a hard kick to Heath Herring's liver, or the success of a middle kick to land his orbital bone splitting left straight on Bob Sapp - Mirko was a smart fighter. Here's a nice example of Mirko faking his great left straight to get Mark Hunt to lean into a left high kick.

Here's just one little example which I have always enjoyed of Cro Cop taking out a hugely over matched opponent with a simple hand trap. This took place at Inoki Bom-Ba-Ye against Yuji Nagata.

Notice how Mirko cups his extended left arm around his opponent's parrying right hand and pulls it out as he kicks over it.

On this list because: Has dominated the top light heavyweights in the world and spends the majority of a match kicking at range.

Is it early to have him in here? You tell me. He's beaten the best light heavyweights in the world and 60-70% of his strikes are kicks. Jones is a disciplined puncher, but he doesn't punch often anymore. It is his punishing kicking game which has allowed him to dominate a division of power punchers. Men such as Quinton Jackson and Vitor Belfort who have never known how to defend kicks, have simply been ground down on the end of his legs, looking less and less like they want to be in the cage. Even experienced kickers such as Mauricio Rua look like sloppy brawlers as they are forced to stand at range and be kicked or run in and miss or be taken down.

In 2012 we have seen Jones' kicking game diversify enormously since he won the title - using mainly front kicks to the body and the head. Jones now uses push kicks to the knees and thighs far more frequently and even forced Vitor Belfort to perform his familiar flop to guard with a hard side kick to the body.

In a list of functional kickers Jones deserves to appear because while the length of his arms is constantly commented on, he rarely uses them to keep the distance - preferring instead to use push kicks then butcher the legs and arms with roundhouse kicks from high to low. 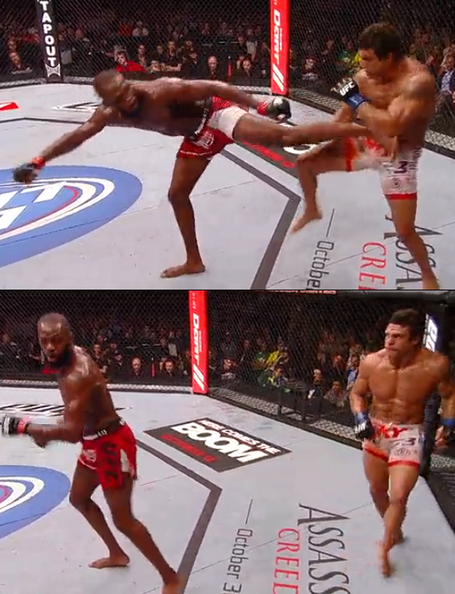 On this list because: Proved the efficacy of the snap kick with the ball of the foot despite having few other techniques.

One for the hardcore fans now, if you don't know who he is go and look him up and you will not be disappointed. Katsunori Kikuno could easily have been the next top lightweight to come out of Asia if it weren't for terrible decisions by both the judges (see the travesty against JZ Calvan) and Kikuno himself (who has now opted to fight with his hands by his thighs to prove some point about his karate strength). Kikuno at his best though was something to behold!

Kikuno's signature technique is his snap kick with the ball of the foot (or koshi). When Kikuno's opponent thinks a roundhouse is coming he brings his knee in and delivers a front snap kick - when they think a front kick is coming he turns the kick over and delivers a slanting front kick or a roundhouse kick with the ball of the foot. Kikuno's classic combination is to step forward with his right foot into a southpaw stance, throw the hard left snap kick and follow his left foot in with hard hooks as the opponent's hands drop in reaction to the hard kick.

Not many fighters at lightweight could batter Eddie Alvarez on the feet, but Kikuno did when the two met back in DREAM. The fight was a fantastic back and forth battle with Alvarez eventually getting the weaker ground fighter to the mat and finishing him.

5 of Anderson Silva's most spectacular strategies are covered in Jack's first ebook,Advanced Striking along with 70 strategies from 19 other fighters.