Bellator 81 Judo Chop: Marcin Held and the Lost Art of the Toe Hold

At Bellator 81, Marcin Held submitted Rich Clementi with a toe hold - a submission rarely seen in high level MMA. Ben Thapa explains with GIFs by Zombie Prophet just exactly how Held held Clementi and why the submission is so rare.

Share All sharing options for: Bellator 81 Judo Chop: Marcin Held and the Lost Art of the Toe Hold

The successful toe hold is as rare as a nun in a bikini - and we got one on live television on Friday Night!

At Bellator 81, in the lightweight tournament semi-finals, Marcin Held torqued Rich Clementi's left foot beyond the point of toleration and escape. The technique is generally called a toe hold in most English-based grappling venues and is often seen in grappling matches as a threat - but not often as an actual submission. The idea is to grab the toes and the outside of the foot with one hand, immobilize the leg with the other arm and your body and use the resulting figure four grip to torque the trapped foot around the instep. The foot gets rotated far past the normal range of motion and the ankle's tendons, ligaments and bones can be torn or broken.

In case you missed the image above, a really good toe hold looks like this (look of pain optional): 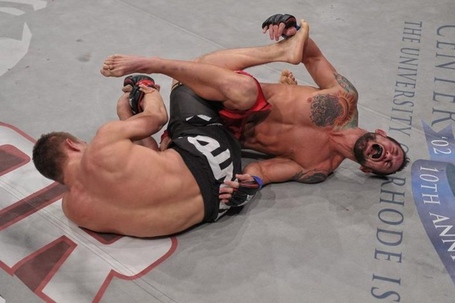 For various reasons, the toe hold is distinct from and somewhat easier to defend than a heel hook (other Judo Chops on heel hooks: Jorge Santiago's Inverted Heel Hook | Imanari's Scary Heel Hook on Kevin Belingon | Shogun Rua's Fightsaving Leglock on Hendo |Ed Herman's 50/50 Heel Hook on Kyle Noke). The grip is harder to really torque enough to get a determined fighter to tap, the shape of the foot allows the slip out to occur with greater ease and most times, it is very hard for a fighter to justify giving up a good ground position for a toe hold when a kneebar or a heel hook is probably there for the taking too.

However, Marcin Held gives no figs about giving up position for a leglock of any kind. Using what appears to be a Don Quixotie-like dedication to prove the validity of inverted guard in MMA, Held has built a surprising 15-2 career record with only the rudiments of a striking game and weirdly effective leglocks. He rolls for anything and everything that has to do with legs and often gets away with it to a surprising degree due to his fairly good ground-based stamina and the reluctance of opponents to engage in serious busting up of leglock offense like Alan Belcher did against Rousimar Palhares at UFC on Fox: Diaz vs. Miller.

To further emphasize how rare the toe hold is, I found a perfect Leland Roling quote in a UFC 100 Judo Chop to put this in context (statistics valid as of July of 2009 and still pretty valid today):

*According to Leland Roling's analysis of the FightFinder database: Only 115 fights (out of approximately 62,600) have been won via Toe Hold. There are probably others that were called "Ankle Lock" or "Footlock", but that only accounts for another 204 fights.

Frank Mir's toe hold of Tank Abbott remains the only toe hold in UFC history. Mir's bone snapping strength should be common knowledge at this time, but his seizure of the foot and timing should also be appreciated. Luke Thomas and Kid Nate collaborated on a toe hold Judo Chop - worth the read even today - in preparation for Mir/Lesnar II. From it, we can swipe a couple things - a GIF of Frank Mir being Bonecruncher Mir and an understanding that it takes a considerable degree of strength or technique to overcome the difficulties of applying a toe hold. Frank used the brute strength route at UFC 41 and Marcin Held used the technique route at Bellator 81.

However, Frank got his tap in 46 seconds and Held had to go through several cycles of leglock attempts in two rounds before he got his tap. The difference lies in how Clementi properly defended for one and a half rounds. Rich is a savvy veteran and knew going into this fight that Held would be going after his ankles and knees. However, Held's attacks were consistently better than Rich's prevention of such attacks and after a while, most people get worn down being on the defensive all fight long.

In the first GIF from the first round, we can see that Held has the left leg of Clementi locked up in a figure four grip. However, the leg is not fully immobilized and Clementi has extended it to a nearly straight position. A toe hold can work if the leg is straight - see Mir/Abbott - but it takes quite a bit of overwhelming strength. In most MMA fights or grappling matches, the competitors are relatively evenly matched in terms of strength and size. Here Clementi is strong enough and smart enough to push his right leg into the tangle. The right foot pushing into the figure four breaks things up and lets Rich free for a potential position change or leglock of his own.

Held doesn't give up though. He latches onto the foot again for another toe hold. This time, Held is trying to get Clementi's foot up towards Rich's butt. This is done to get another form of torque operating in the leglock: the rotation of the foot and ankle over the pivot of the knee. This can turn very bad very quickly for the person stuck in the leglock if the proper defenses aren't put in place. In response to this, Clementi gets a bit more direct with his defenses. He starts shoving Held's head with his right foot to push the whole assembly back to a straight position. It works well enough for him to wiggle free.

The remainder of Round 1 saw Held continue to attack Clementi's legs with heel hooks and position changes. Rich performed the proper counters fairly well and seemed like he was conserving his energy for Round 2. Unfortunately, Held had other ideas.

The odd position Held is in is an inverted guard variant that I know as the "Tornado guard" - not to be confused with the XKCD comic titled thusly. Held's right leg is underneath Clementi and between his legs. The left leg is free to move about and kick to off-balance Clementi or maneuver Held around for a possible sweep or submission attack. The name of this interesting position that I use came from the marketing efforts of Roberto "Cyborg" Abreu, a 230 lb Brazilian jiu jitsu champion, who has made a highly decorated career in the BJJ world with his technical prowess and interesting sweeps from this position. Held doesn't want a sweep, of course. He wants Clementi's left leg.

The ability of Rich to base out and potentially punch Held in the head (or under ONE FC rules, knee him in the head) is stifled by extreme closeness of Held. The left hand has to control the left leg of Held and the right hand can be seen trying to extend out to preserve Rich's base. Clementi cannot anticipate the mini-shifts of Held's positions and eventually he goes over, undone by the pulling, pushing and the indirect kicking of Held's body. Clementi's left leg is already folded up underneath him due to the base-out - which is a bad thing for him.

As Clementi goes over, Held already has the toe hold set up with his hand positioning - just like Frank Mir had his hands ready to go for Tank Abbott's foot. Clementi's offbalancing means that he has to either stick to his grip-based defenses with extreme dedication or try to get out, up to his feet and away from Held with as much speed as possible.

Unfortunately, Marcin's legs are cinching tight enough and the spin is happening fast enough that Rich cannot get away easily. Also, Rich has forgotten to push his leg straight enough during the off-balancing and rotation to prevent Held from moving the foot up towards the butt. There are now two types of torques being exerted on this foot and Held is finally able to immobilize the leg enough to really push those toes.

Note how tightly Marcin is holding the actual toes of the foot. This is done, despite the general slipperiness of the toes, because greater torque can be applied. The side of the foot is a more "secure" grip and only an inch or two away, but it is a worse grip for actually submitting someone with a toe hold. The coolest thing about pushing that foot up to the butt is that the immobilizing arm (the one with the hand grabbing the opposite wrist) gets even better position to pull the rest of the leg into the body and provide a better position to torque the foot from.

As the toe hold gets closer and closer to the butt, it gets harder and harder to tolerate and tough out. Clementi taps - hopefully before any serious damage is done - and Held walks away victorious.

Other people have not been as lucky or smart.

Perhaps we will see more toe holds in the UFC, but with the difficulty of shoving a resisting leg upwards and the slipperiness of the grip, I believe the heelhook will remain supreme - despite the best efforts of catch wrestling andgrappling masters like Josh Barnett and Billy Robinson.