On Saturday 1st December, British Mixed Martial Arts fans will once again have the chance to witness another exciting night of fights as BAMMA returns to the NIA in Birmingham for the fourth time in its history. 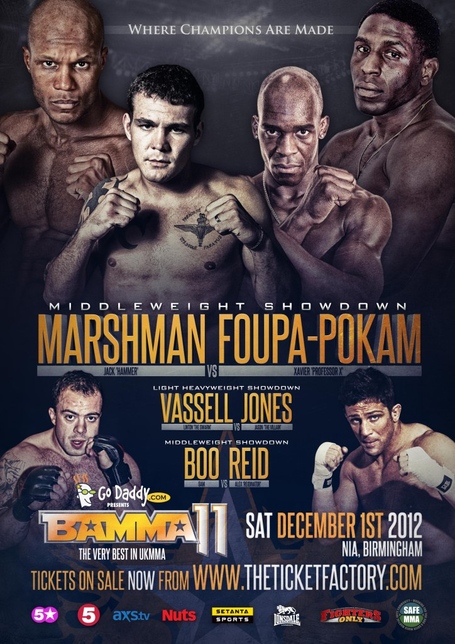 Stepping into the cage for the 13th time, military man Marshman looks to add another victory to his already impressive record which has seen him win 11 of his 12 professional bouts, with 8 of these coming via KO or TKO along with 2 wins via submission and only one bout going the distance. Marshman gave us a glimpse of the plethora of evolving skills at his mercy with his impressive submission victory at BAMMA 10 against a submission specialist in Andrew Punshon.

The former BAMMA British Middleweight Champion is excited to test his skills in the cage once again stating, "I'm feeling really good and I'm excited about this fight, mainly as this is my first fight at international level. I'm up against someone who is experienced and skilled in all areas, so I will definitely expect to prove that I'm a well-rounded fighter and I expect it to be exciting for both me and the fans."

His opponent, Xavier Foupa-Pokam, aka Professor X, returns for his 2nd BAMMA appearance following on from his TKO loss to Alex Makhonin at BAMMA 5. The 6ft 1 Parisian has had an up and down career, which has seen him travel across the world to fight, and at one time winning 12 out of 13 consecutive fights. Following a recent dip, Foupa-Pokam's record currently stands at 22-18.

Marshman hopes to cement his reputation as one of the country's most exciting international prospects with a win over the experienced Frenchman.

BAMMA welcomes Linton ‘The Swarm' Vassell to the Light heavyweight division for his first fight with the organisation. Training at Immortal MMA in Milton Keynes, Vassell will make the trip to the National Indoor Arena hoping to add another victory to his record of 10-3-1. Already racking up two British titles in his 4 year career, Vassell will look to finish this fight fast as he has done finishing 8 of his fights in the first round, by using his aggressive style to overwhelm his opponent who comes in the shape of Jason ‘The Villain' Jones.
Dutch fighter Jones holds a record of 18-9 and returns to BAMMA for the second time, on the back of a 3 fight win-streak which includes a TKO stoppage win at BAMMA 9 over Przemyslaw Mysiala. ‘The Villain' brings a wealth of international experience to the cage with him and will hope to live up to his nickname by stopping the Englishman in his own backyard.

For the first time in over what has been a turbulent year, Alex ‘The Reidernator' Reid, returns to the cage for a Middleweight bout against Sam Boo.

Reid returns to BAMMA for the first time since his epic five round Middleweight title bout against former Champion Tom Watson, a fight which changed how many people view Reid as a fighter; showing tremendous heart and courage throughout, despite eventually losing the bout via Decision.

Reid said: "It's been a long time and I'm itching to get back to fight again at BAMMA. First and foremost, I'm a fighter. It's always been at the heart of what I do. My name has been in the headlines for all the wrong reasons and it has set me back in the sport I love and now I want to get the headlines for the right reasons. I'm going to prove myself to BAMMA fans, as I proved two years ago when I was up against Tom Watson in the hardest fight of my life, that I have what it takes."

His opponent, Sam Boo comes into the fight with a record of 5-7, but views the fight as an opportunity to launch his name further up the rankings taking out his more well-known opponent. Fighting in his 13th fight since turning professional in June last year, Boo hope's to utilise what he sees as an advantage in his fitness to ‘smash' Reid.
The trash talking has already started and both men will be hoping for a much desired and needed win when the opening bell sounds.

Hoping to steal the limelight on the main card will be two further bouts, including Warren Kee vs Tom Breese, and Stevie Ray vs Dale Hardiman in title fights in the Lonsdale British Welterweight and Lightweight Divisions respectively.

A further 10 fights will complete the card and with some of the best of British up and comers, to UFC veterans, along with a total of 7 unbeaten records, and 2 Lonsdale British title belts on the line, BAMMA 11 promises to be another memorable night for Britain's leading mixed martial arts organisation. Not forgetting to mention the return of Britain's most recognisable and controversial cage fighter both inside and outside of the ring; Alex Reid.

BAMMA 11 will be shown on Channel 5 in the UK and see their website for further viewing information.