Jack Slack takes a look at some of the great technical feats and failures from the UFC's first excursion to China including Cung Le's win over Rich Franklin, Takanori Gomi's reaching hand against Mac Danzig and Thiago Silva's weak defense against Stanislav Nedkov.

There's plenty to be talking about this week ahead of the return of Georges St. Pierre against public enemy number one, Carlos Condit, so I'll get all of my UFC Macao post event analysis out of the way in one article so that we can get on to being excited.Make sure to check out my enormous Killing the King piece on Georges St. Pierre ahead of that fight.

UFC Macao - or UFC on Fuel 6 - was all around a pretty alright event, especially if you went in with low expectations. It isn't going to be remembered as the best event of the year, or even the fortnight with the aforementioned UFC 154 coming up, but it was passable and after a night of decisions we got two good finishes courtesy of Thiago Silva and Cung Le.

If you didn't catch the event, watch the Cung Le fight. If you did watch the event here are a couple of technical points which you might not have spotted the first time around.

This fight is being heralded as something of a return to form for Gomi, but I doubt that a prime Gomi would have any trouble stopping Mac Danzig. What Gomi did show, however, was improved patience and a return to some of his boxing form which made him so dangerous at his best. Gomi is known for his first round stoppages but in truth his fighting style was never about one punch knockouts, he just piled on body shots and hard hooks and straights to the head until his opponent succumbed to them. Trying to knock an opponent out with wild swings will just get a fighter caught running in as Gomi demonstrated against Eiji Mitsuoka.

In his bout at UFC Macao Gomi returned to his body shots and his stiff jab - winning a great many of the exchanges on the feet and outlanding Danzig by a healthy margin. Something which Kenny Florian kept coming back to in the commentary of the fight was Gomi's habit of reaching with his right hand - seemingly exposing him to the left hook of Danzig. In truth Gomi was using a traditional and old fashioned method of landing his strikes. Gomi's head movement has never been great, that is how we know he has one of the all time great chins in MMA, but he didn't used to get hit as much as he has in recent years. Fighters who lack good head movement or great evasive footwork can often find that checking their opponent's offensive options before stepping in can keep them relatively safe from counter attacks. 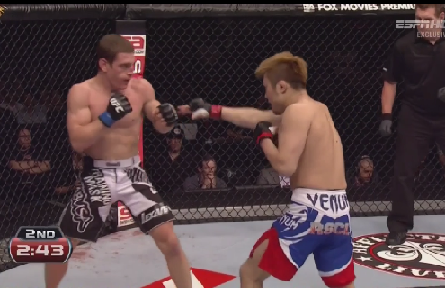 Here is Gomi checking Danzig's lead hand with his rear hand. This is an excellent method for stifling men with a traditional boxing offense. If Danzig jabs he will be obstructed by Gomi's right hand, if he throws his left hook he will have to move it outside of Gomi's hand first, telegraphing it, and if he throws his right hand he will be at a distinct speed disadvantage. Gomi's jab is much faster and a much shorter technique than Danzig's right straight - even though Gomi was the slower fighter he was not going to get caught with right hand leads from here.

Reaching to check the lead hand is a more traditional method of landing the jab than throwing it and keeping the right hand nailed to one's own jawline. It was utilized to great effect by Jack Johnson, Joe Louis and Roy Jones Jr. among many others. Any time Danzig jabbed, he hit Gomi's lead hand and Gomi jabbed back. If Danzig did nothing, Gomi pulled Danzig's hand down - eliminating Danzig's lead hand strikes altogether - and jabbed him anyway.

2. Gomi parries the jab down and fires his own jab back. Though the right side of Gomi's jaw is exposed, it is safe from Danzig's eliminated left hand, while his left shoulder is snug against his chin.

It's not always the prettiest technique in the world, but eliminating the opponent's lead hand before stepping in is a great technique for slower fighters to drag fast jabbers onto a muddy track, where their speed will be of no use. It is also a great technique if you do not like to subscribe to the popular current of thinking that your hands should always be nailed to your chin.

It was hard not to enjoy Thiago Silva's finish at UFC Macao - an arm triangle from mount against an undefeated prospect is a great win to have on anyone's record. Unfortunately Thiago showed the same glaring holes in his game which were exploited by Alexander Gustaffson, Rashad Evans and Lyoto Machida. Silva's style is exciting to fans because he comes straight forward with hard punches and kicks, with little thought to defense. His ultra aggressive style, however, makes him exceptionally easy to tie up and to bait into traps. His sulky temperament in response to men not simply trading with him also leads him to walk straight into clinches and punches.

Silva's attempts at becoming more defensively sound have caused him to simply cover up and retreat until his back hits the cage whenever his opponent starts throwing strikes. He routinely allowed Nedkov to tie him up along the fence in a round where not much was happening - essentially giving away the round. Against a great MMA wrestler like Rashad Evans this would be a great way to give away an entire fight. 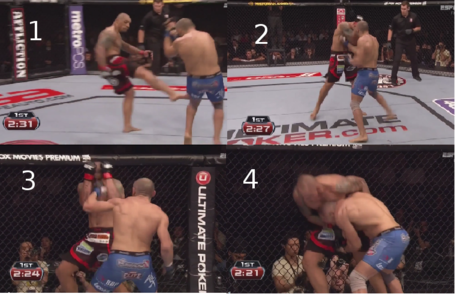 2. Nedkov comes back and Thiago covers up and moves straight backward.

3. Thiago's back hits the fence.

4. Nedkov moves into position for a single leg attempt.

Silva desperately needs to learn to circle out when retreating rather than moving back on a straight line, as laying against the fence is not a great course of action against the level of competition he is hoping to be fighting again very soon.

Silva's bipolar mentality towards striking, focusing entirely on offense or entirely on covering up, got him in to serious trouble at the end of the second round as he allowed Nedkov's false retreats to bait him in. Silva ran in with a right uppercut (not a sensible lead) and got hit with a hard overhand and dropped to his back. 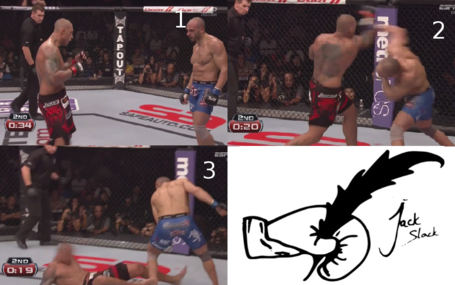 1. Nedkov keeps backing up to draw Thiago in.

2. Thiago comes in swinging and gets hit with an overhand.

3. Thiago falls to the canvas.

Silva recovered and pulled out the win but this same over-aggression without thought for defense is what allowed Alexander Gustaffson and Lyoto Machida to retreat, draw him in and tag him over and over. Silva seems to get frustrated by anyone using an ounce of strategy and just piles in after them harder - getting himself slapped silly by both men. Thiago Silva is a world class talent, but he has a bully mentality which gets him beaten up against anyone with an ounce of striking strategy. He either needs better sparring partners or better coaching to teach him the value of good defense and movement in order to reach his potential.

The big finish of the night came in the Middleweight masters division as Cung Le knocked out Rich Franklin about a minute in to the main event. Unusually for Le this knockout came courtesy of a punch, despite his notably weak hands in previous performances. In truth though this knockout was more the work of Franklin than it was Le's striking genius.

Rich Franklin's boxing has always been functional but sloppy, with his non-punching hand always down by his nipple or hips and his head sticking out in front of him. A fighter can get away with such quirks as a southpaw because facing mainly orthodox fighters they are more thrown by the difference in stance, but against another southpaw it is back to an ordinary kickboxing dynamic and the flaws are suddenly much more costly.

Throughout the fight Franklin was lunging in with his chin up and head forward in typical fashion but managed to avoid the first few right hook counters Cung Le attempted. Le threw about five attempts at the right hook counter which he used to finish the fight, it was pretty clear what he was planning to do.

Every time Rich came in Cung leaned back and threw a right hook, hoping to punish Franklin's undisciplined hands, but the first few times Franklin managed to react in time. It was when Franklin threw a kick that the holes in his striking form caught up with him. 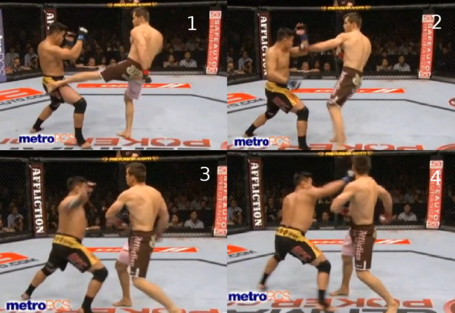 1. Rich lands a kick on Cung - notice that his right hand is low where it should be across his face or at least up and ready to block.

2. Cung begins to come back with a right hook, Franklins hands are still low.

3. Franklin plants his foot and prepares to swing a right hook, dropping both hands to thigh level to do so!

Notice that when Franklin kicks his hands are down by his sides. This is incredibly bad form but still massively popular among mixed martial artists. Igor Vovchanchyn and Fedor Emelianenko picked up dozens of easy knockdowns in their careers by simply throwing a punch as their opponent kicked.

It was fantastic to see Cung get his career back on track, but sad to see Franklin's ringcraft and good sense finally fail to make up for the deficiencies in his striking form. It is interesting to see Cung working his hands so extensively - throwing no effective kicks throughout the brief fight - and it might be a sign that he is going to fight more to his age. The general consensus around this bout among pundits was that Le would take it early or crumble late but I don't think many saw Le doing it with his hands alone!

Learn the correct way to kick and the strategies of effective striking in Jack Slack's BRAND NEW ebook: Elementary Striking. 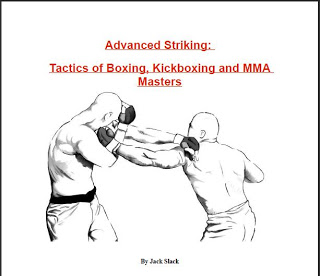