UFC on Fuel 6 certainly didn't lack in decisions, with 7 of the 9 fights going the distance. There were definitely some interesting scorecards though, including one from one of the only finishes of the card.

The UFC's first trip to China was filled with decisions all the way up to the co-main event. Even one of the two finishes on the card was a 3rd round stoppage. Beyond the rather interesting refereeing by Marc Goddard and Steve Perceval, there were three fights of note featuring interesting scoring from the judges at ringside.

First up is Takeya Mizugaki vs. Jeff Hougland, which opened up the evening's main card. Mizugaki dominated Hougland from start to finish and probably sent Hougland out of the UFC. This one isn't very controversial but there was the rarity of a 30-25 score given to Mizugaki by Aaron Chatfield. 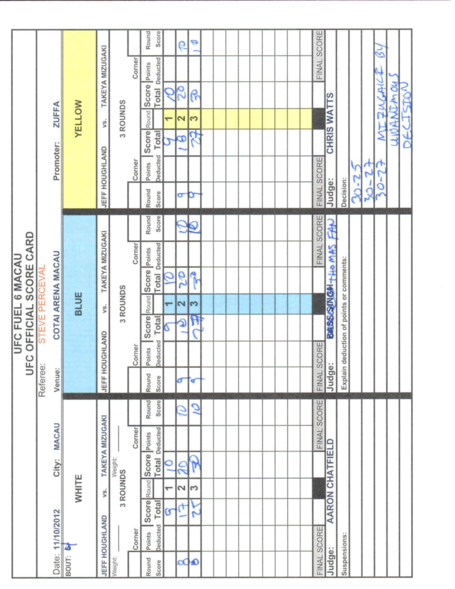 The majority of prominent MMA websites (including this one, Sherdog, and MMA Junkie) did not give Mizugaki even one 10-8 round but Mr. Chatfield obviously felt it was lopsided enough for Mizugaki to earn two of them. Chatfield's other notable scores include 30-27 for Cristiano Marcello against Reza Madadi at UFC 153, and 29-28 for Akira Corassani over Andy Ogle at UFC on FUEL 5.

Next up is the bantamweight fight between Alex Caceres vs. Motonobu Tezuka. Admittedly I missed all of the prelims because 5 AM for me means sleeping and not watching fights, but from Brent Brookhouse's commentary and the aforementioned other MMA sites, this wasn't thrill-a-minute stuff. That said, Caceres was widely given the nod over his Japanese opposition. Two judges scored this one 30-27 for Caceres, but the one dissenter curiously scored it 29-28 the other way. 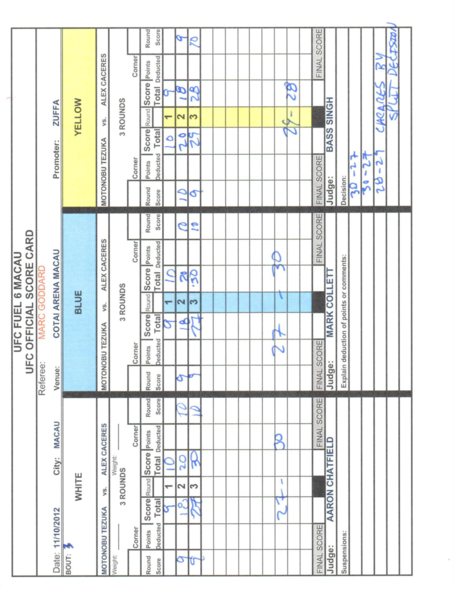 Bass Singh scored rounds 1 and 3 for Tezuka. Our own Brent Brookhouse had it 29-28 Caceres, giving Tezuka round 1 and nothing more. This is the first time Singh has judged at a UFC event.

Lastly, and this one definitely could've been controversial/debatable had there not been a finish, is Thiago Silva vs. Stanislav Nedkov. Silva won the fight with a 3rd round submission over a completely exhausted Nedkov, but both the commentators and many fans believed that Silva was behind on the scorecards or at least even. Well that was not the case, as all three judges had Thiago up 20-18.

Just spoke with Mike Mersch, who was acting as commission head in Marc Ratner's absence. He confirmed Silva was indeed up 2-0 over Nedkov.

The judges were as follows: Aaron Chatfield, Bass Singh, and Mark Collett.

I personally didn't agree with 20-18 for either side and especially in the case of Nedkov, who provided next to nothing on offense beyond wild strikes and leaning Silva against the cage. He was credited with 0 completed takedowns and I only gave him the 2nd round because of the late knockdown when neither fighter was really "doing much".

What are your thoughts on these scorecards? Would you have given Mizugaki a 30-25? Or Silva a 20-18? Or Tezuka earning the decision?