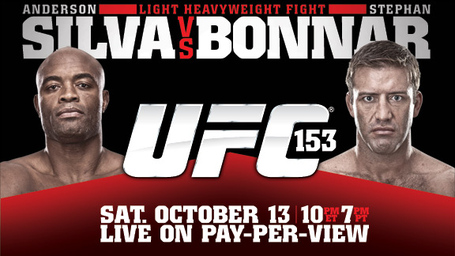 Some men hunt vampires. Others chase storms. I like to ambush and derail bandwagons. And when I saw that oddsmakers and MMA pundits had set ridiculous odds against Stephan Bonnar defeating Anderson Silva at UFC 153, my bandwagon alert sensors buzzed with indignant vigor. Surely the only possible explanation for Bonnar's ludicrous 14:1 chance of victory is that people are running with the herd?

The surface facts seemed to support my view:

In light of these facts, Bonnar on paper doesn't seem like the hopeless sacrificial lamb everyone seems to assume he is. The story of Bonnar's career is not that he has been easy to beat. It is that when it mattered most, he fell just short of what it took to eke out the victory. If you are sympathetic, you might call him not mediocre, but unlucky. So with those aforementioned assets combined with the valiant fighting attitude of a man with nothing to lose, could he eke out an upset against the Spider?

It would take a brave man to predict that Bonnar will prevail. However, we saw Buster Douglas and Matt Serra knock out Mike Tyson and Georges St-Pierre respectively. We saw Ryo Chonan submit Anderson Silva. Upsets do happen. The question is, what do we know about the weaknesses in Silva's game that Bonnar is uniquely positioned to exploit? If Bonnar is showing up with the intent to shock the MMA world rather than just to bank a fat cheque, what is his most viable fight strategy?

Before I delve into Anderson's weaknesses, I shall preemptively parry an objection I know will be raised. Whenever a fight analyst wades back through the mists of time to find weaknesses in a great fighter's game, people always raise the inevitable protest that "that was a long time ago." I disagree with this line of logic, because in my observation, fighters form their fighting style very early in their careers and rarely change.

They may learn a few new tricks and exhibit modest improvements, but their basic fight pattern is as immutable as a fingerprint. This is particularly true for Anderson, who was already a well-rounded fighter very early in his career. I will show in my analysis that his fighting style (and weaknesses) have remained largely the same throughout his MMA career. Take my hand, dear reader, and let us scramble down the rabbit hole...

This was Anderson's first MMA loss. And no, it wasn't because he was a less-skilled fighter at the time. If anything, this Anderson was younger, stronger and more agile than the 37 year-old veteran we know today. But more relevantly, he fought much the same way. See for yourself:

Against Okami, Anderson lost by disqualification despite dominating the fight until he broke the rules. So unless Bonnar's strategy is to bait or inveigle him into throwing an illegal upkick or Sonnenesque knee, there is no lesson to be drawn from this loss. Likewise, Chonan's win over Anderson was so spectacularly unlikely that it must be deemed unrepeatable.

The flying leg scissors/heel hook Hail Mary attack that Chonan won with was the sort of thing you only see in Jackie Chan movies and staged martial arts demonstrations. It isn't supposed to happen in real life. Yet Chonan executed it flawlessly against the best fighter in MMA, snatching a breathtaking victory from the jaws of impending defeat.

The only reason this fantastic upset is not more widely cited as possibly the greatest submission comeback win in MMA is because most people, being Anderson fans, would prefer to forget it ever happened. There is no tactical lesson for Bonnar to learn from this fluke loss (other than that nobody is invincible), but I include it anyway just because it is a huge helping of martial arts awesomeness:

Anderson Silva vs. Chael Sonnen 1 and 2

Anderson of course won both fights against Sonnen. However, of the 7 rounds in total that they fought, Anderson lost 5. Those who would argue that Anderson's losses to Azeredo and Takase were too long ago to matter, have the burden of explaining how come Sonnen won those 5 rounds in exactly the same way that they did. Observe:

So now we know what the winning strategy should be. The next question is whether Bonnar is the man to execute it. Three relevant qualities define Bonnar:

In conclusion, as I said it is a brave man who would definitively predict an upset victory for Bonnar. However, I thought it would be useful to analyse how he could win, simply because nobody else is doing so. Bonnar has the superior size, aggressive fighting style and grappling ability to take Anderson down and eke out an ugly decision victory. It has been done before, and Anderson's recent fights show it can be done again. If Bonnar does the unlikely and snatches an upset therefore, it shouldn't be as big a surprise as it will inevitably be portrayed.