UPDATED: Miesha Tate's site NOT fake, promoted by her in June

Share All sharing options for: UPDATED: Miesha Tate's site NOT fake, promoted by her in June

This is one of those headlines that I didn't envision myself ever being forced to write today. Yet here I am. In one of the weirder pieces of news I've heard in a while, former Strikeforce women's champion Miesha Tate is selling memberships to her website for 4.99 a month or 24.99 a year. That's kind of unusual for an MMA fighter, but not that crazy. Hell, Mark Hunt famously tried to charge people like 197 bucks every six months to read his nonsensical blog back in the day. I'm still not sure if that was a joke or not though. Anyway, here's what you get from Miesha if you pony up the fee:

Spelling memorabilia correctly might be helpful, but we'll skip past that to the last one - a one-on-one video chat with Tate. In the vein of Ken Shamrock's 11.99-a-minute phone calls, now anyone can sign up to get some facetime with the former champ. I'm not going to say anything bad could possibly come from this little plan (I'll leave that to Cage Potato), but seriously - this has bad news written all over it.

UPDATE: Apparently, this was a false report that Miesha cleared up via Twitter:

UPDATE (By Stephie Daniels): In another fun twist, http://mieshatatemma.com/ , which Miesha claimed was a fake site, is actually very real, and was promoted by Miesha herself in June. It even offered a video chat at the time. Listen, if I had the kind of blowback Miesha got yesterday, I wouldn't want to claim it either, but unfortunately, the evidence speaks for itself:

I will b doing a live chat tomorrow at 6pm PST on my new website MieshaTateMMA.com b sure to say hello! 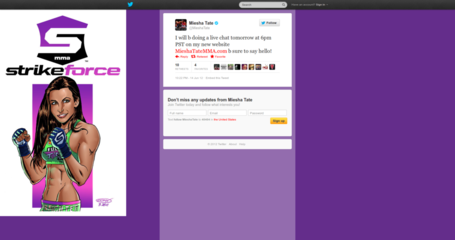