The latest news from the Asian MMA scene: UFC hires Korean Ring Girl for Macau, Mirko Cro Cop in negotiations with Road FC, ONE FC 7 and a flyweight GP planned for Manila, Legend FC inks TV Deal with AXN, and much more.

As always, here's a complete round up of all the news coming out of the Asian MMA scene.

Let's start out with the lighter news from the region. UFC: Macao is in a few weeks, and one of the tidbits coming from the event is that the UFC has hired a Korean model and celebrity to act as their guest ring girl for their event. Meet Kang Ye Bin:

More on UFC's Asian expansion, watch Lorenzo Fertitta talk about his thoughts and plans on hosting a show in India.

As reported earlier, ONE FC's next show was tentatively planned to happen on December 1 in Malaysia, but there were multiple issues that has apparently led to moving the show to February instead. First, their partners in the URCC will be hosting their next major event on the same date, and according to our fellow SBN site MMA Fighting, ONE FC officials also mentioned "lack of venue options and availability" in Kuala Lumpur as another reason for the change.

ONE FC 7 will happen on February, and sources close to the situation have informed BloodyElbow.com that the event is now currently planned be held in the Philippines instead. This will mark the promotion's 2nd show in Manila, with ONE FC 5 happening at the historic Araneta Coliseum last August.

The opening round of a Flyweight Grand Prix is expected to begin on this February event, and while the participants have yet to be made official, names such as URCC Champ Roy Docyogen, former Shooto Champ Shinichi Kojima, Andrew Leone, Geje Eustaquio, and Allamurad Karayev, are already part of their roster at 125 lbs.

Although the bouts haven't been finalized, the ONE FC Bantamweight GP is also expected to be continued on the said event.

Hong Kong-based promotion, Legend FC has announced that they have inked a TV deal with AXN, which is one of the more popular action and entertainment-based channels in South East Asia. AXN is a large network owned by Sony Pictures, which broadcasts to 21 countries and has a reach of about 154 million viewers.

According to the announcement, the agreement spans from October 2012 through August 2013.

If the promotion gets decent time slots on the popular network, this could be huge for Legend FC and for spreading awareness about the sport across South East Asia. AXN isn't a sports network, but it is a general entertainment channel which boasts a very strong viewership with the adults aged 18-39, which is generally the same with MMA's core demographic.

Will the promotion get quality time slots on the network? It is yet to be seen, but if they do, they can have the potential to break new ground by reaching and converting new fans to the sport.

UPDATE: Legend FC officials have informed me via twitter about their time slots at AXN saying, "Each future Legend FC first-run will be 10pm to midnight the Saturday after the show takes place". This would mean shows would be aired on AXN a week after the event, and on a pretty good time slot. 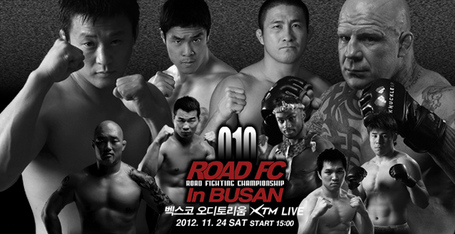 The top Korean promotion, Road FC has already inked Jeff Monson and signed him up for their 10th event in Busan. The long time MMA veteran will be facing South Korean wrestler, Kang Dong Gook this November on the Road FC 10 card which will also hosts the Lightweight GP semi-finals, and a middleweight title defense.

According to the Road FC president who just picked up Monson, they are also currently negotiating with other MMA veterans such as Mirko Filipovic. Here's an interview translated by Sherdog.net and cross-posted on the official Road FC website:

"We are having contract negotiations with Mirko Cro Cop. It is a very real possibility that Cro Cop fights in ROAD FC. We are also scouting and talking to a lot of past PRIDE and UFC fighters. But I cannot reveal anything as of now."

Speaking of MMA veterans, Denis Kang had fought with Road FC multiple times, going 1-2 with the promotion. Apparently their relationship has gone sour and they have since parted ways:

"Honestly, I hoped Kang would have been an honorable Korean. I really wanted to revitalize his career. Hence, why I tried to get him on major networks and TV shows in South Korea. But every time, Kang would only want to fight the weakest challengers, avoided a lot of fighters, and always wanted something extra after his fights. These are the reasons why we could not continue to do business with Denis Kang."

The choice words doesn't end there, as the Road FC president is also upset with the UFC brass for taking their bantamweight champion in Kyung Ho Kang for UFC: Macao without giving any compensation. Assuming the translations are correct, he calls the UFC "cheap" on this separate interview:

During a recent interview with The Korea Times, Jung expressed his frustration over losing former Road FC bantamweight champion Kang Kyung-ho to UFC

"Do you know how much of our resources we spend to discover and develop talent? However, Kang really wanted to go, so I let him, even though UFC didn't pay anything to our organization. They use their reputation to recruit talent, while the talent-builders like us get nothing."

As we mentioned before, DARE has been trying to work around the ban of MMA in Thailand. So far they've hosted an underground show where people are only informed about the event details on the last minute to avoid authorities. Everyone has kept quiet about the event and the fights are now being released as separate online episodes called "The Most Dangerous Gameshow".

The first part featured a heavyweight bout, and the promotion has since released a few more bouts. Check them out below: