No fight in recent memory has been so divisive among MMA fans as the bout between Nick Diaz and current UFC Interim Welterweight Champion, Carlos Condit. Diaz's army of rabid fans have raised all kinds of furor over the result of the fight, accusing Condit or running away and declaring that walking an opponent down is an important scoring criteria. It's not likely that I'll be able to change the views of any of Diaz's most hardcore fans - some even claim him to be the best welterweight in the game today despite the fact that the man hasn't fought a great wrestler in 6 years, in a division made of great wrestlers - but I hope to clarify some of the subtleties of Condit's strategy and how Nick's own style worked against him.

The key lies in Nick's stance (something he shares with both his younger brother and B.J. Penn); It is narrow so that he is almost side on and his lead foot is often turned in. This is so that he can drive his foot inside of his opponent's to land a southpaw jab and so that he can turn his lead hip in further and extend his reach. Unfortunately it also means that he:

Inability to check outside low kicks and a difficulty in turning to face a mobile opponent are something that you will see at times in many of the Diaz brothers' and Penn's bouts (most notably Penn vs Edgar or in the second and third round of Diaz vs Cerrone). Everyone who had seen Donald Cerrone return to the gameplan of low kicking after his disastrous first round against Nate Diaz had already realized the significance of the outside low kick in fighting the Diaz brothers. In fact way back at the beginning of the year I wrote a piece predicting the role this kick would take in the Jackson's MMA gameplan for Condit against Nick Diaz.

The front-foot-turned-in stances that the brothers present mean that they are particularly vulnerable to kicks to the outside of the leg, rather than the inside. As southpaws, kicking the outside of their lead leg requires the opponent to use his lead leg, just as Fedor Emelianenko did to break Jeff Monson’s leg in November, and this would be a good strategy for Condit to follow.

His push kick to the knee may also buckle Nick’s leg inward while preventing Nick from entering punching range, and it would be sensible for Condit to commit to this from the beginning in an attempt to slow Diaz down and limit engagements.

Though many have complained about Carlos Condit's kicks lacking power and being purely to score points ("leg jabs" is the term I hear thrown around in arguments about this fight) you can see that almost all of the kicks Condit threw were able to buckle Diaz's knee inwards, hindering his mobility, simply because Nick already fights with his lead knee turned intwards. Were Nick to fight in a slightly more square on stance he would not only be more able to check kicks, but he would be able to take them without his knee buckling and allowing Condit to escape.

Throughout the bout the lead outside low kick was the weapon of choice for Condit as it continued to prevent Nick from following him as Condit circled out towards' Nick's lead side. Later in the bout Condit began using the low kick to break Diaz's balance and set up techniques such as the high kick.

1. Condit enters with a left kick to Nick's lead leg, kicking it inward and forcing him into a short stance.

2. As Nick is off balance Condit plants his left foot and kicks Diaz in the face with his right.

Furthermore every time Nick attempted to work his way in, Condit would simply circle away from Diaz's left hand and in the direction which Diaz's stance made it very difficult to follow. Notice below how rather than getting into an exchange with Diaz (which is tactical suicide for anyone who isn't a Diaz) Condit slips the first punch, lands a quick pot shot and circles out. This is what Diaz fans termed "running away" but in fact it was just disallowing Diaz the only sort of stand up fight he wants - head to head against the fence. Notice the size of Diaz's turning circle is as his lead foot is turned in. 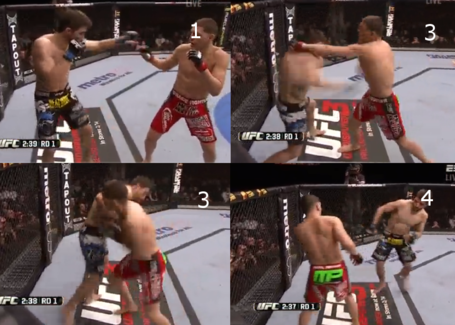 2. Diaz attempts a left straight but Condit steps his own lead foot outside of Nick's, slips the punch and lands a hard right hook to the body.

3. Condit follows his head and gets his feet under him by moving out to Diaz's lead side.

4. By the time Diaz has turned Conit's back is off of the fence and he is back in the centre of the octagon.

This kind of in-out single shotting while avoiding prolonged exhchanges was the method used by KJ Noons to upset Diaz in Elite XC.

At certain points in the bout with Condit, Diaz switched to orthodox stance - something he does typically when he is a little confused or wants to mix up his offense. Diaz won his rematch with KJ Noons mainly by switching stances repeatedly and forcing Noons to play catch up with his strategy. When Diaz switched stance against Condit, rather than square up and throw a low roundhouse kick (allowing Diaz some chance at countering) Condit reverted to the classic push kick to the knee. It's difficult for a fighter to punch hard if he can't plant his lead foot and that is exactly how Condit kept Dan Hardy tentative.

1. Diaz has switched to an orthodox stance, hoping to stop Condit escaping to Diaz's right.

2. Condit performs a push kick to the knee cap to keep Diaz off of him. This is variously called the chasse Italian or the oblique kick and is a staple of the Jackson's MMA team's longer fighters.

It is very fashionable to complain about "gameplans" but in truth our sport would just be brawling if it weren't for our human instinct to avoid getting hit. If everyone fought like Nick Diaz the champions of each division would be people like Chris Leben rather than movement based strikers such as Anderson Silva. Nick Diaz is a wonderfully skilled striker, who uses combinations which most people wouldn't think possible, but his footwork and kicking defense simply wasn't up to the task of catching Carlos Condit. It is hard to be angry at Condit for avoiding the only type of stand up fight that Diaz is suited to.

It is important to remember that walking an opponent down while getting hit is not dictating the pace of the fight - it is dictating when you get hit.

The techniques of Nick Diaz's as well as 20 other world class strikers are covered in depth in Jack Slack's Ebook, Advanced Striking.