Fabio Maldonado and Glover Teixeira put on a violent bloodbath in their bout at UFC 153 but all that was really revealed was Maldonado's obviously deficient boxing and Teixeira's inability to mix up his striking. Today we look at how the match played out.

For those of you who haven't seen it already, Glover Teixeira demolished Fabio Maldonado in a pretty predictable match at UFC 153. Maldonado's hard head and terrible boxing technique were on full display, as was Glover Teixeira's one note, right hand led attack. Neither man had the ability to adapt his game to deal with his opponent's, and so this match was simply two bulls butting heads until one fell. That said, even bulls look to cut and angle and gore their rival's flank - these two just plodded forward time and again.

Today we'll examine the holes in both men's one dimensional striking games.

No matter how much you've been told about Fabio Maldonado's boxing - it's pretty atrocious. He is touted as having a 22 - 0 professional boxing record with 21 KOs but the truth is that were any of these wins over even semi-credible opposition he would be making a great deal more money in boxing than a mid card UFC fighter does. Some highlights from Fabio Maldonado's boxing record (which is here for your enjoyment):

All boxing records are padded, but Fabio Maldonado's is just flat out fabricated and the fact that he never fought even a semi-competent boxer may answer the questions over why he has such terrible head movement and defense. Brilliant body punching does not equate to brilliant striking and that showed yet again against Glover Teixeira.
My main observation of Fabio Maldonado was that in order to close the distance he must move into range - and as he never moves his head he almost always gets hit as he moves in. To demonstrate this point in my last article on Maldonado's boxing I created the Fabio Maldonado Collage of Pain. 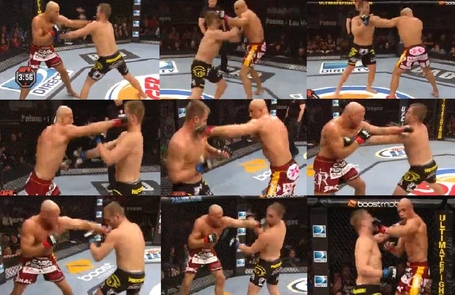 Every single one of these frames shows Fabio Maldonado getting nailed by Kyle Kingsbury as he steps in to attack. Notice how in almost every frame his hands and shoulders are low and often his chin is high. As I said when I examined his boxing the first time:
Maldonado's complete absence of head movement is a terrible habit for an infighter to have (as their game relies entirely on closing the gap) - and certainly his habit of jabbing with his head bolt upright will be cause for concern against Glover Teixeira - whose entire striking game revolves around throwing the right hook over his opponent's jab.
Whenever I am asked to pick a winner in fights I always err on the side of caution and repeat "I don't make predictions" - but through examining each man's technique, especially when they are so one dimensional in their tactics as Maldonado and Teixeira, it is often possible to make an educated guess at how a fight will play out.
The story of this fight was Maldonado's terrible head movement and Glover Teixeira's inability to lead with his left hand. From the opening seconds Maldonado attempted to step in and was immediately backed up by Glover Teixeira's swinging right hook counter. Though Glover failed to land solidly with his go - to lead, he immediately followed with a left hook and put Maldonado against the fence for a beating.

1. Maldonado jabs with his chin high and his hands in no position to defend. Glover uses his signature Cross Counter, slipping inside of the jab and simultaneously throwing a right hook over the top of it.
2. Maldonado backs straight up with his hands down and his chin high, Teixeira nails him with a follow up left hook and the fight begins to fall apart for Maldonado.
Teixeira's Predictability
Glover Teixeira's performance was hardly faultless however - despite being touted by some as the future of the light heavyweight division Glover has shown little to no improvement between fights. He opens every single fight the same way - walking his opponent down until they throw a punch then firing his right hand over the top just as he did to Maldonado. He did the exact same thing against Marvin Eastman, Kyle Kingsbury and every other fighter he's met. Furthermore the longer Glover's fights go, the more one realizes that he has few other tricks to offer.
Glover will throw the occasional high kick but time and time again he comes back to leading with the overhand right. Glover Teixeira doesn't just have no jab, he actively avoids leading with his left hand.

Every single time Glover Teixeira attacks his opponent it is with the overhand right or occasionally a right hook to the body or a right uppercut. One of the reasons that his opponents can hang around so long even when hurt is that they know what is coming. As a fight progresses one can see Glover rapidly running out of ideas - such as when he began shooting single legs at Maldonado in hopes of finishing before Glover himself gassed. By the end of the second round Glover was chasing down the punch drunk Maldonado and throwing right hook - left hook over and over, occasionally landing. Were Glover to even occasionally jab, or lead with his left, or throw a kick or punch to a different target he would have been able to finish Maldonado decisively, but as it was yet another opponent was allowed to stick around far too long against Teixeira.
With the idea of a match with Quinton Jackson back on the table, Glover's insistence on leading with his right hand and his inability to mix up his striking may well make him the perfect opponent for Rampage to triumphantly knock out before retiring from MMA.

Jack Slack breaks down over 70 striking tactics employed by 20 elite strikers including Sugar Ray Robinson in his ebook,Advanced Striking.