Anderson Silva successfully defeated Stephan Bonnar while holding his own back to the fence for much of the fight. Silva then used the fence to rebound Bonnar into a fight finishing knee to the solar plexus. Today we examine Silva's use of the fence to tire his larger opponent.

I'll be honest and up front with my readers - I was never interested in the fight between Stephan Bonnar and Anderson Silva - it was another match up which on paper served as an exhibition fight for the middleweight king; against a light heavyweight with few takedown skills and little punching power. I expected to wake up this morning and find everyone raving about Anderson Silva's incredible defense as he dropped his hands against another non-puncher, a repeat of the Forrest Griffin match. While we did get a little of that (sure to impress fans who don't realize how limited Bonnar's striking force is) - what actually impressed me enormously when I watched the bout was that Stephan Bonnar fought exactly as he should have done.

Stephan Bonnar did not run at Anderson Silva in slow motion as Forrest Griffin did time and again - Bonnar actually looked to spoil the match by pushing Silva against the fence and tiring him out. More impressive than this was Anderson Silva's answer to this. As the first round progressed viewers will have noticed that it was Bonnar rather than Silva who was tiring despite having Silva up against the fence. Bonnar struggled to muscle in arm punches at the middleweight champion and was rarely on balance to throw a hard knee - meanwhile Silva exerted himself little and exploded with shoulder bumps into Bonnar's face and knee strikes to his legs and midsection at any sign that Bonnar himself was relieving pressure.

In a clinch fight against the fence Bonnar's weight advantage should have allowed him to tire Anderson Silva and grind some life out of the middleweight kingpin. However all that ended up happening was Bonnar became exhausted himself and was easily dispatched by The Spider. Bonnar was far from hopeless in his challenge - a hard elbow he landed visibly altered Silva's hands down strategy - but ultimately Anderson Silva proved his class by winning a fight with his back to the fence. 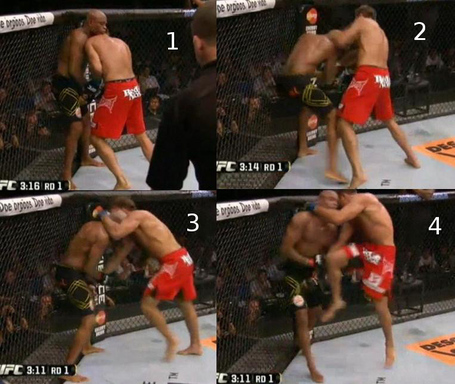 This is an excellent example of Silva's brilliant rope a dope strategy:

1. Silva holds Bonnar's right wrist with both of his hands.

2. Bonnar tries to hit Silva with his free hand, Silva takes his head to the other side of Bonnar's body - making it difficult for Bonnar to hit him with power.

3. Bonnar grips the back of Silva's head and switches his feet, telegraphing a knee.

4. Silva stands upright and turns his body as if to shoulder roll - as he is still holding Bonnar's right wrist he uses Bonnar's own arm to deflect the knee.

A second example of Silva's strategy against the cage, this one shows the efficacy of Silva's commitment to even seemingly powerless strikes such as the shoulder bump. 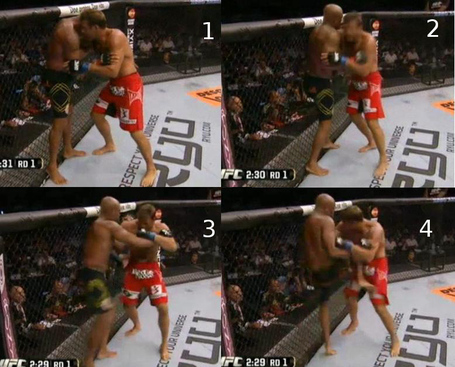 1. Silva and Bonnar are tied up, Bonnar is moving his head back and forth.

2. Silva performs a small jumping motion with his legs, shoulder bumping Bonnar in the nose. This creates space between the men.

Here are the two defensive strategies Silva continued to return to against the fence after he ate a nasty elbow while showboating with his hands down. 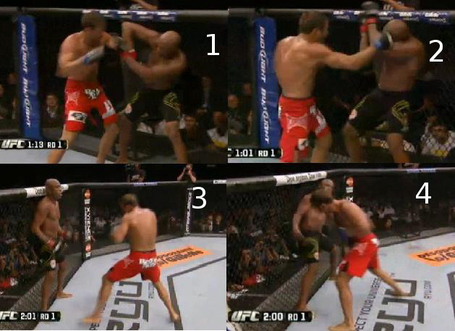 1. Silva uses his elbows and forearms to deflect any elbow strikes Bonnar throws.

2. Silva assumes a high guard to block Bonnar's punches. Notice that he takes punches on his elbows rather than his gloves. This is important in MMA because covering with the gloves is as good as worthless but is still taught by some coaches.

3. Silva demonstrates the side step he used all night. He begins with his hands down against the cage.

4. Silva steps off to his left (to the outside of Bonnar's right elbow as Bonnar punches) and uses his left hand to parry the punch if it follows him. From here Silva landed a short right hook and re-clinched.

Now we'll look at the finish. Trips have often been used to set up strikes in Anderson Silva's game - take a look at the piece I wrote about his Thai clinch clinic of Rich Franklin to understand that better. Here it was no difference - Silva uses takedowns to create scrambles, openings for strikes and to get his opponents off of him, he has no interest in holding his opponents on the mat. 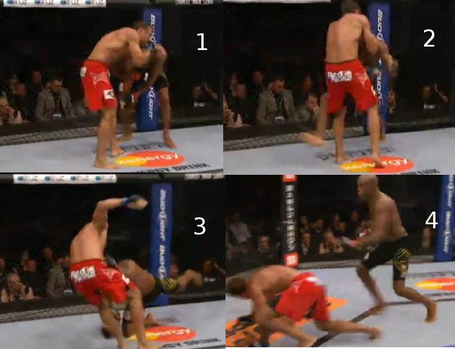 2. Silva hooks behind Bonnar's left leg with his right and drives him over it.

3. As he drops the trapping knee to the floor Silva uses his right hand to catch Bonnar's elevated left foot and uses his left hand to drive Bonnar's hips backward.

4. Bonnar hits the deck and starts to come up but Silva is already on his feet and chasing the American.

their rebounding opponent is remarkably few. Bas Rutten used a teep onto the ring ropes to brawl with every opponent he met, Randy Couture enjoyed running opponents into the fence and scooping their legs up as they rebounded (most notably on Chuck Liddell) - but few men use the fence as well as Anderson Silva.

Whether Anderson Silva is

it is clear that Silva's ability to use the octagon as his partner in a fight has been hugely influential in his becoming the most successful man to ever fight inside it.

To read more about Anderson Silva's signature techniques and to learn several of his most effective strategies, pick up Jack Slack's ebook Advanced Striking: Tactics of Boxing, Kickboxing and MMA Masters which contains over 70 strategies employed by 20 of the world's top strikers including Anderson Silva, Alistair Overeem and Floyd Mayweather.