Dallas Winston dissects the main event of UFC 153, examining whether Stephan Bonnar has a legitimate chance to beat Anderson Silva in this in-depth multi-media preview of Silva vs. Bonnar at UFC 153.

Sure, most of us would prefer the "All American" but we'll have to settle for the "American Psycho" instead.

After Anderson Silva (32-4), the UFC's unparalleled middleweight champion, slammed the Chael Sonnen storybook shut with a definitive TKO in their rematch, everyone wondered who was left to challenge the king. Unbeaten in the Octagon, "The Spider" has trampled, toyed with and ultimately ran over all comers save Sonnen back in their shocking first encounter at UFC 117. Travis Lutter might deserve an honorable mention -- but the vague memory of taking Silva down and mounting him briefly hardly holds water nowadays, especially since Lutter was entombed in a triangle choke and deflecting elbows with his forehead shortly after.

Silva's last official loss was a DQ in 2006 for cramming an up-kick down the throat of a grounded Yushin Okami. The defeat was more of a case of understandable punishment for breaking a silly rule than being out-performed, and Silva eventually avenged it convincingly by relegating Okami to his extensive highlight reel. Before that, Silva was the victim of what is still arguably the most spectacular submission in MMA history courtesy of Ryo Chonan in Pride, who went airborne across the ring and somehow secured a flying-scissors heel hook.

Silva hasn't lost in the last 6 years and 16 fights; a dominant streak that's elevated him atop the rankings in the world pound-for-pound and Greatest of All Time categories. Having transformed the 185-pound division into a barren wasteland populated only by the lifeless corpses trailing in his wake, we have a new twist for Silva's next opponent: a foray up in weight, which will be the champ's 3rd at 205-pounds, and a tough-as-nails, charismatic underdog to rally behind.

Stephan Bonnar (15-7), one-half of the down-and-dirty brawl at the live finale of TUF 1 that's accredited with vaulting MMA to mainstream status, will meet Silva in the cage in the main event of UFC 153 tonight. And Bonnar is flat-out "sh**tting in his pants" at the nearly immortal obstacle in front of him, but admitting that with a smile is a perfect example of why he's a passable choice for the job.

Let's be honest -- the people picking Bonnar to beat Silva are either praying for a miracle and angling for the gratifying "I told you so!" cool-guy-points afterwards, admirably willing to immerse themselves in the "Rocky" storyline the bout's being painted with or substantially looped on illicit drugs. I'm not saying Bonnar doesn't have a chance -- this is, after all, the sport that's constantly reinforced that "anything can happen" -- but the likelihood is slim at best, and that's being generous.

That doesn't mean I'm not into it though; I am, and you should be too. Bonnar might not have the wrestling and takedown clout of Sonnen nor the outrageous submission savvy of Demian Maia, but he sure as hell has takedowns as good as Lutter's, an immeasurable amount of heart and determination, exceptional durability, the submission prowess to cause trouble for Silva and the size and strength to overpower him.

Continued in the full entry. 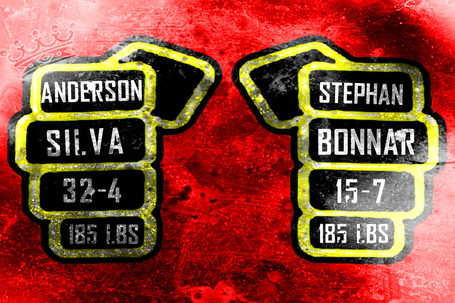 I don't think it's excessively harsh to speak from the standpoint of "How could Bonnar possibly win?" as opposed to a straightforward comparison in this instance. Silva has faced and finished more formidable strikers (Dan Henderson, Vitor Belfort, Rich Franklin), wrestlers (Sonnen, Henderson again), submission artists (Maia, Nate Marquardt) and opponents with a size/strength advantage (Okami, Forrest Griffin).

But, again, that doesn't mean it's impossible for Bonnar. He'll be tasked with chasing down a veritable magician with uncanny movement and the sport's best medley of footwork and striking. Therefore, his ultimate goal should be to assume a range from which he can actually mount offense against Silva. That sounds painfully simple, but Silva's stretch of cringe-worthy title defenses against Patrick Cote, Thales Leites and Maia were all propelled by his ability to sashay out of harm's way with painful consistency.

To achieve this, Bonnar must rely on his sound agility to pursue an appropriate range against Silva without chasing him desperately. No one is better in open-space combat than Anderson Silva, so that's the conundrum Bonnar has to crack in order for the mere chance of imposing his physicality. While Silva's seemed unstoppable to corner and contain throughout the gist of his UFC career, Sonnen made him look vulnerable with calculating footwork and mastery of range in addition to his stellar wrestling.

Sonnen is an expert at timing his level change and getting deep penetration on his takedowns. Bonnar can't emulate Sonnen's elite takedown skills but he can emulate his explosive footwork and command of fighting range; plus his greater size and length will serve him well when shrinking the gap and reaching out to snare a leg or tie up in the clinch. Bonnar also shares Sonnen's same level of extreme durability and fearless tenacity, and will exhaust every available option to impose his will or die trying.

Getting ahold of Silva in the center of the cage will be a small victory, but capturing him against the fence will get things cooking. The champion's Thai clinch is utterly devastating but his venom should be somewhat diminished there, as Bonnar's willingness to swarm after takedowns or scoop up an incoming knee and turn it into a trip present viable risks. Additionally, the whirlwind of crushing knees Silva unleashed on Franklin from the Thai plum were befitting because "Ace" was content to trade and wasn't pursuing takedowns. Bonnar's height advantage (6'3") will help and he's no slouch when it comes to offensive clinch work either.

Bonnar is far from a standout technician in the clinch -- however, he's a serious grinder and a broad-shouldered load in standing tie-ups and definitely has the intelligence to capitalize wherever possible. Further, another key factor in Bonnar's ability to find his range is his striking. No mortal will be favored in a straight kickboxing match with Silva but Bonnar has the type of diverse arsenal (replete with spinning wheel kicks and solid boxing), length and experience to employ his striking as a set up.

Whether he can engage Silva with reckless combinations, pull out unexpected surprises from the fringe or just connect on a wayward blow, Bonnar will have the opportunity to latch onto Silva and muffle his potency with control anytime Silva plants his feet or stays stationary. What's odd about Silva -- and in this situation, an encouraging aspect -- is that his counter movement and takedown defense has been both absolutely excellent (Maia, Cote, Leites) and curiously substandard (Sonnen, Lutter).

Regardless of the mystery associated with Silva's inconsistencies, he's been caught with his feet planted and put in serious danger before and it's conceivable that it'll happen again. Another recourse is for Bonnar to launch counter takedowns when and if Anderson goes for the electric finish that many are expecting, which would let Anderson do most of the work by using his forward momentum to solve the range riddle.

If he can constrain Silva or force him to the floor, Bonnar is a longtime black belt in BJJ under the great Carlson Gracie with a strong command of position. Enforcing that know-how in conjunction with his ground strikes, submission acumen and size advantage will put Bonnar in the best possible position to finish or ride out the round on top. In a 3-round affair, he's equipped to prey on every opportunity and capitalize to the fullest; he'll take a 10-9 score in any way, shape or form, and that wins him a third of the fight.

Logically, it's no coincidence that words like "chances," "opportunities," "possibilities" and "maybes" punctuate the analysis. The bare bones is that Bonnar has the heart, skills and size to pull off a miracle upset, but the reality is that he probably won't. I think we'd all be content to tune in for a competitive fight or even exciting moments that lend fleeting hope for the "Rocky" story to transpire, but the safer bet is merely another exhilarating finish from the best fighter on the planet.

My Prediction: Anderson Silva by TKO.