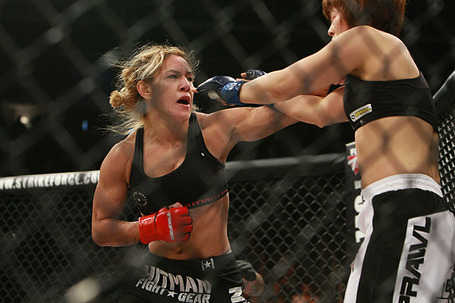 As just reported earlier this afternoon, Strikeforce Featherweight Women's Champion Cristiane Santos tested positive for anabolic steroids according to the California State Athletic Commission. Current reactions on the Internet run the range of amused head-shaking to confused outrage, as Cyborg's incredible strength and dominant aggression catapulted her to the top of the women's MMA rankings as the #1 pound-for-pound female fighter. But while any PED-related scandal is a black mark on the sport, the impending absence of Santos oddly enough has a major silver lining for Strikeforce's female fighters — especially Ronda Rousey.

Although Rousey is currently slated to fight Miesha Tate for the Strikeforce Bantamweight Women's Championship, her rapid move to title contention has been dogged by critics pointing out her short MMA record and lack of 135-pound fights. By far, one of the biggest critics is former champion Sarah Kaufman, who points out that Rousey shouldn't get a title shot because of her attractive looks or self-promotion. But with Cyborg assuredly facing a minimum year-long suspension, Rousey is actually in a brilliant position to become a two-division title holder.

Rousey has been accused of ducking Santos by Kaufman, Santos herself, and many others, but the reality of the situation is simple. Once Santos is stripped of the title, Strikeforce's female featherweights have a unique opportunity to fill the gap left by the dominant champion. In particular, Rousey's public profile is high enough that she could immediately challenge for the 145-pound title belt, regardless of whether she wins or loses against Tate.

After all, Rousey has made a name for herself with just four one-sided fights and impressive blunt interviews, and as ESPN's Chad Dundas notes, that translates to some much-needed excitement in the division:

Rousey has the chance to be transformative figure in women’s MMA. To do that, though, she needs to prove she can back up all her talk. Giving her an immediate shot at Tate gives her that chance in a sink-or-swim, high-stakes gambit that will be attractive to fight fans, assuming Strikeforce spends any time at all promoting it. Tate versus Rousey feels fresh and compelling (two other things Strikeforce in general and the women’s division in particular need to strive for) and comes steeped in bad blood. The fact that some people don’t think Rousey deserves it only makes it all the more interesting.

If Rousey is smart, she'll start lobbying for another title shot at her original weight class as soon as possible, and Strikeforce should have an opponent lined up.

At the very least, it seems like Hiroko Yamanaka should be owed another title shot, Alexis Davis could get a phone call, and with Gina Carano's movie stint at a pause, now would be a great time for her to start cutting weight. Heck, since Strikeforce seems to love the tournament format so much, they could host another one in a similar fashion to the Strikeforce Challengers event headlined by Joe Riggs and Louis Taylor in 2010, but hopefully strung out over two or three events rather than a single night. And remember, this is Strikeforce, so records don't really matter in title shots. Even opponents with recent losses like Amanda Nunes and Julia Budd could become contenders this year.

So there's the question. Did Cyborg Santos just kill the division with one bad urine test? Or is her loss this a rare opportunity for other female fighters to fill the gap?

[McKinley Noble is a former staff editor at GamePro and an MMA conspiracy theorist. Follow his Twitter account for crazy talk, 1990s movie references, and general weirdness. Or you could just stalk him on Google.]

Now that Cyborg Santos has been popped for PEDs, how should Strikeforce handle the women's featherweight title?