Come one, come all, to the second installment of this Judo-related series. Due to the sheer size of Part 2, I thought it best to split it in half. As such, today we'll be discussing Nage Waza, or throwing techniques, but more from a theoretical standpoint, and we'll also go over some of the dificulties one can expect to encounter in transitioning from Judo to MMA. Keep in mind that this is not a "my Kung Fu is better than your Kung Fu" type of write-up, which means I'm not here to advocate Judo's martial superiority, but rather to show how Judo and MMA can work together.

As previously stated in Part 1, Judo is derived from the unarmed fighting techniques (Jiu-Jitsu) of the Japanese Medieval warrior caste, the Samurai. Often times in Far Eastern Martial Arts, particularly Japanese arts, there is a certain emphasis on maximum efficiency, Seiryoku Zenyo, on conserving your own energy at your opponent's expense, and using his own aggression and momentum against him. A beautiful thought to be sure, and one that Judo tries to keep close to heart, offering its practitioners the necessary technical knowledge.

Before we get started with today's topic, there is a small matter that needs addressing. Judo has often been described as "wrestling with jackets on", which brings us to an integral part of the art, the uniform, known as the Judogi, or simply gi. 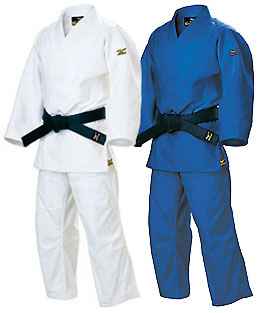 If it bares a strong resemblance to the Brazilian Jiu-Jitsu gi, that's because BJJ evolved from the Judo by way of Mitsuyo Maeda, a traveling Judoka who passed on his skills to the renown Brazilian Gracie family (this is rather an oversimplification, so be sure to check T.P. Grant's article on the subject if you're not already acquainted with it or with the history of BJJ in general). Traditionally, the Judogi is white (supposedly signifying a number of things, from willingness to die to the search for inner purity), but for an easier distinction to be made during official matches, the blue gi was adopted sometime around 1986.

The gi is made up of three parts:

Using one's gi against him is law, in Judo. Aside for the throws which more often than not require a firm grip, the Judogi also acts as a means through which to manipulate your opponent on the ground, because it offers a number of possible grips usable for either sweeping, pinning or choking someone out. More on that in the following post, though.

As far as throws and gripping are concerned, there is an interdiction regarding grabbing the pants before initiating the attack - which means grabbing during or after the attack has been initiated is permitted. Also, grabbing the leg itself is allowed, a useful thing indeed if you intend to pull a Morote Gari (Judo's version of the Double Leg) on someone. I do not wish to get into a lengthy discussion on the (ever-changing) official rule set for competition, but I will be attempting to clarify various aspects as they appear.

When dealing Nage Waza, or throwing techniques, the basic principle that comes to mind is Kuzushi - balance. You and your opponent begin in a state of balance and must attempt to unbalance each other in order to gain the upper hand. For this to happen, when executing a technique, you must have a proper entry, Tsukuri, which means your feet, hips, arms and practically your whole body must be in their proper place - adequate posture is paramount - in order for the Kake, or execution, to work. That being said, one must always execute the throw without hesitation, because there is always the threat of a well-timed counter during sparring or competition.

Attempting slow-motion throws while still in the early learning phase can place both you and your partner/adversary in danger, as there is always the risk of having the other person fall on top of you, or on their head. As such, it is a wise option to leave slow motion to movies, video games and people with the right know-how. This is not to say that rushing is the key. Correctly executing throws is not a walk in the park, and time needs to be taken to develop the technical aspect of each move, so normal speed is just fine for beginners.

What tends to hinder novice Judokas are the balance and entry aspects, and for this purpose, when first drilling a throw with a partner, the typical training method is to do a number of repetitions without actually pulling the trigger, so to speak. When the Judoka feels he is capable of executing the move closer to how it is intended, or when the instructor thinks he is up for the task, the practitioner begins to drill the throw in question by executing proper entry for a number of times, resetting immediately after each entry, and finally going for the full throw in the end. Of course, the learning experience will always vary from club to club, but these are the general guidelines for such drills.

The official number may be set at 67 throws, but almost each one of them has a number of variations derived from subtle changes such as simply having a different grip, and one is allowed to improvise to a certain extent during the execution of the throw, as long as it is within the allowed framework, which can lead to even more variations. Speaking of grip, though, it is worth noting that Judo greatly increases one's grip strength, due to the constant strain the fingers must endure from attempting throws. This can mean into better wrist control during MMA fights, which is always useful.

For your viewing enjoyment, I have included below a video that illustrates all 67 techniques. It's a long but enjoyable visual experience so if you've got half an hour of time to spare, give it a go over.

If you lack the time, however, here's a 30 second clip containing 26 of the major throws:

Now that we've gotten that out of the way, being a good Judoka (being able to compete on a high level with good results) and taking your skill set into MMA with similar success can be a rather uphill battle. There are quite a few reasons for this, so let's see what I believe are some of the most important ones (in no particular order).

Judo relies heavily on gripping the gi for control. The majority of throws have you grabbing on to your opponent's sleeve (usually at elbow level), collar (levels will vary), belt, pants, or a combination of two of these. Since this is the case, MMA takes away one of Judo's fundamental tools, lessening the number of throws one can execute. After all, it's one thing to be able to grasp a durable sleeve or whatnot and tug at it, but it's entirely another story when all you've got to work with is some sweaty fellow in shorts that seems to want to redesign your face. A Judoka transitioning to MMA must therefor learn how to work almost exclusively from the clinch (more on that in Part 2b).

Once you get your opponent on his back with a correctly executed technique, the Judo match is over. That spells all kinds of trouble for a future MMA fighter of this particular background. It can create the habit of relaxing once you know you've secured the throw. Furthermore, not everybody that does Judo is adept at following up on the ground (there are even Judoka who avoid the ground game all together). Some clubs might drill this more, some less, so it's up to the practitioner to adapt his game to include taking advantage of the split second where the opponent is dazed and confused from the fall to get a dominant position and go for submissions, much like Ronda Rousey enjoys doing. More on this in Part 3 where we'll be handling the ground game.

In some situations a throw will land both you and your adversary on the ground. That is to say you don't always get the luxury of looking down on the one you've trying to mangle. Sometimes you land on top of him, even into his full guard. And if that someone is a better submission artist than you, you're looking kind of silly for having gone to all that trouble to take him down the way you did, and practically diving head first into his skill set, now aren't you? So you simply have to be good on the ground or at least have good top control for this to work. But again, more to come in Part 3.

I'm afraid that's all we've got time for today, but if you've enjoyed this series so far, be sure to check out Part 2b where I'll attempt to illustrate how one can integrate Judo techniques into his MMA game by going over various examples of mixed martial artists that have had success applying the principles and moves of Nage Waza.

Posts belonging to this series:

The Takeaways Of A Judo Background. Part 1 (Break-falling technique and physical conditioning)

The Takeaways Of A Judo Background. Part 2a (Throws: theoretical approach)

The Takeaways Of A Judo Background. Part 2b (Throws: integrating them into MMA)

The Takeaways Of A Judo Background. Part 3 (The ground game)