Entering into the mid-1900s, the Brazilian fighting spectacle known as Vale Tudo was gaining popularity and the first family of Vale Tudo was the Gracie family. Lead by the famous brothers Carlos and Helio Gracie, who won the family fame by taking matches with Judokas and catch wrestlers. While the Gracies didn't always win these matches, they always left an impression.

But in the 1950s, being top dog was catching up with the Gracies. Luta Livre was gaining popularity based off Euclydes "Tatu" Hatem's defeat of George Gracie. A school of Jiu-Jitsu fighters founded by Luis Franca, another student of Carlos Gracie's original teacher Mitsuyo Maeda, defeated the Gracie Academy using footlocks, which Helio scorned as a 'suburban' tactic. Other members of the Gracie handled the defeat with more grace, and it was declared that this loss meant that Jiu-Jitsu belonged to everyone, not just the Gracie family.

Despite this Helio Gracie thought that Gracie Jiu-Jitsu belonged to the Gracies and while he accepted everyone at this academy, he would not teach those outside the family anything but the self-defense fundamentals and withholding advanced techniques to all but the most favored students. Helio had entered a wartime mind set, seeing these challenges as targeted at his family and not his martial art, thus his first order of business was to protect the family.

This mind set was just reenforced in 1955 by a man named Waldemar Santana.

Santana was a student with Helio and showed amazing technique as well being an outstanding athlete. Helio broke his own rule concerning allowing those outside the inner circle to learn advanced techniques. For five years Helio taught Santana Jiu-Jitsu techniques reserved for Gracies and the Gracies' closest friends. It even reached a point at which Santana taught classes at the Gracie Academy. But one weekend Santana left a sink running after cleaning the mats at the academy. 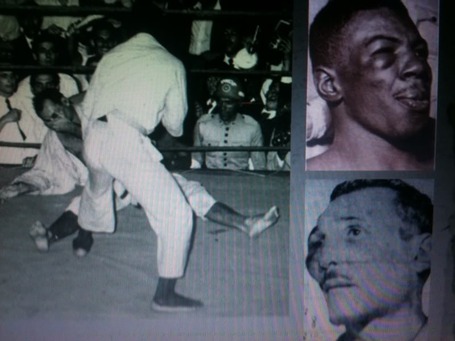 Helio returned on Monday to find his academy flooded. Helio dressed Santana down in front of the academy and when heated words were exchanged, Santana was cast out. Santana joined the academy of another Helio cast-off. He then challenged his former mentor to a Vale Tudo fight and Helio accepted despite being being forty-two years old to Santana's twenty-four. The match was set and strikes in addition to grappling would be allowed.

Santana shocked Brazil by knocking out his former teacher with a soccer kick after almost four hours of fighting. Both left the ring in very bad shape (pictured above: Santana top right, Helio bottom right via i374.photobucket.com). Helio's brother Carlos was in attendance and immediately challenged Santana to another match, but since Carlos was in his fifties it was his son would would fight Santana.

Carlos' son, Carlson Gracie, was an heir to both traditions of Gracie Jiu-Jitsu. Carlson trained under his uncle Helio and learned Helio's hyper technical, grinding style as well as his father's style emphasizing top control and athleticism. 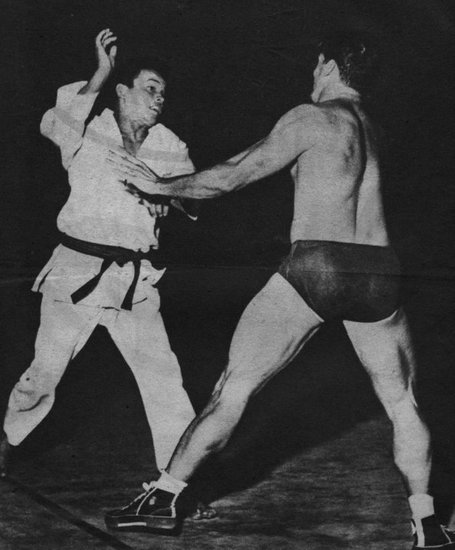 Carlson also inherited both Maeda's and his family's love of tempering one's iron in the fire of combat and Carlson took his first challenge fight when he was eighteen. A grappling only match with a Judoka, Carlson earned a draw after neither fighter was able to submit the other one and time expired. Carlson then issued a press statement, giving an open challenge and that any revenue for the fight would go to charity.

Calrson was much smaller than Cirandinaha, but was able to take the larger man down. Carlson then mounted him and forced the Capoeira fighter to submit to strikes.

So Carlson was no stranger to fighting in a sport context and was edgar to avenge his Uncle's defeat at the hands of Waldemar Santana. It was decided that like the match with Helio, strikes would be allowed but unlike the original fight Santana and Carlson would fight without gis. This was a huge departure from standard Gracie operating procedure by Carlson but his father was so confident of victory he laid a huge wager down with Santana that Carlson would defeat him. This proved to be a mistake as the rules of the match was that the only methods of victory in the match could be knockout or submission and if time expired the match would be declared a draw.

The fight ended in a draw and Santana collected his money from Carlos, and the Gracies grumbled that Santana fought conservatively in order to ensure winning the wager. The first fight recieved a fair amount of attention and the outcome didn't satisfy anyone outside of Santana's wallet, so the two re-matched in front of a crowd of 40,000. This time Carlson was to muster a stronger offense, mounting Santana and then rained strikes until Santana's corner threw in the towel.

There is only video of the first match, and while it ended in a draw, these two were so ahead of their time in terms of fighting that their match looks strikingly similar to a modern MMA match.

This fights made Carlson an instant hero to the Gracie's and all their students, but whatever good will Carlson's win over Santana won him with his uncle Helio was quickly gone. Carlson and Helio clashed over several issues.

Helio held to the tried and true techniques and methods that had brought the Gracies to prominence. Helio continued to shun integrating outside ideas, holding that technique alone was the only path to victory and that for the good of the family only the fundamentals should be taught to outsiders.

Carlson argued that the with the line to challenge Gracie Jiu-Jitsu fighters getting longer and longer, the Gracies had to open their doors and recruit all the allies they could. Carlson also embraced Maeda's open mind towards grappling and wished to train with and without the gi. And like Maeda, Carlson wished to test what he learned in a fight.

He began to walk the beaches of Rio, asking for challengers to fight him and told them they could use whatever they wanted to defeat him. Punches, kicks, head butts, scratching, hair pulling and every other dirty trick, it didn't matter to Carlson and then he would defeat them with out striking or submitting them. He simply grappled them to exhaustion and learned as much as he could from the experience.

Carlson opened his own academy, officially breaking with Helio and his traditions. Carlson taught his students everything he knew, and focused on his particular brand of Jiu-Jitsu geared towards fighting Vale Tudo. His experiences also had taught him that strength and stamina played vital roles in success or failure, so Carlson put emphasis on physical conditioning as well as technical training. What really set Carlson and his students apart was they had no fear of defeat, they embraced the challenge of fights and took the toughest fights they could find. 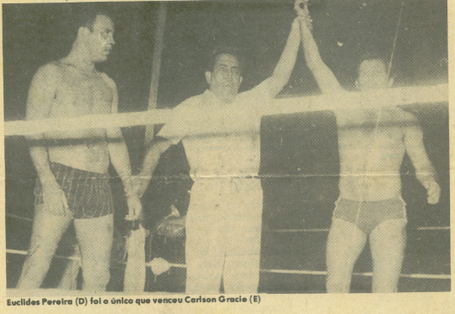 Pereira defeated Carlson by a decision.

The victory was a huge feather in the cap of Pereira who would go on to have one of the great Vale Tudo careers. He would defeat other great Brazilian fighters like Waldemar Santana, Ivan Gomez, and Zulu.

Carlson took the loss in stride and learned from the experience. Indeed Carlson's style of Jiu-Jitsu seems very influenced by clashes with Luta Livre fighters. It was much more aggressive than Helio's slow, grinding style. Carlson looked to get top position and then use technique paired with strength and speed to submit opponents. He wanted his Jiu-Jitsu to work with or with out the gi, so he trained extensively in no gi grappling.

Carlson had a deep impact on his younger half-brother, Rolls, who was the result of an affair Carlos had and was sent to live with Helio. Rolls trained with Carlson, to Helio's dismay at first, but Rolls blossomed into an all-time great Gracie and it was his open minded attitude towards grappling that made him a peerless grappler. Sadly a hang gliding accident claimed Rolls at far too young and age, he did form a bridge of acceptance for Carlson's new approach and the rest of the Gracie family. Rolls had a huge influence on the next generation of Gracies, instilling in them the aggression of Carlson's style.

A video of a 1970s Vale Tudo matches between the Gracies and a local Karate school show just how much an impact Carlson and Rolls had on the mindset of the young Gracies. Feature are fights with Rorion, Rolls, and Relson Gracie among a few others.

Gracie Jiu-Jitsu vs. Karate (via vonborries)

Carlson Gracie's coaching days were just beginning as the rivalry between Brazilian Jiu-Jitsu and Luta Livre would reach a boiling point in the coming years. And it would be Carlson's job to be a general in the field for the next generation of Jiu-Jitsu fighters.