We are just one show into the UFC's 2012 but already have a strong candidate for KO of the year. At UFC 142 last weekend, Edson Barboza unleashed the full power of his striking arsenal and landed a beautiful spinning wheel kick, knocking Terry Etim out cold and forever earning himself a spot on UFC highlight reels.

You don't have to know much about striking to appreciate a moment like that, but in this Judo Chop, we'll try to dig a little deeper. What makes this a wheel kick, not a back kick? Why was it so damaging? And what is this "Lekobuster" people keep comparing it to? Let's sort it all out.

We start with the fundamentals and an important question - what exactly is a spinning wheel kick? It's not a strike too commonly seen in MMA, and I believe this is actually the first time it has ever scored a knock out in the UFC. And the answer to this seemingly simple question is actually a matter of some debate. Depending on your martial arts background, you might call Barboza's kick a number of different things and, to be honest, there is not always a tremendous differentiation between these various names.

The best simple description of a spin wheel kick that I have found comes from this brief video featuring Jeff Sidner of the South Minneapolis National Karate School. He demonstrates a basic wheel kick, followed by a spin wheel kick. Two things to note here. First, Sidner is in a southpaw stance, which means he strikes with his left leg. Since Barboza was in orthodox and struck with the right leg, the motion is reversed. Second, this is a decidedly karate based view on the kick, though the fundamental idea is the same.

Video, plus much more, in the full entry.

That video calls it a wheel kick, but again, depending on your background, that could be called a hook kick or heel kick. I anticipate some good debate over this distinction in the comments. Barboza comes from a Muay Thai background, and Muay Thai tends to be much more utilitarian in their names, so rather than quibble much more over names, let's take a look at exactly what he did with the kick.

Barboza starts in orthodox stance, with his right leg in the rear power position. To throw the kick, he turns in the direction of that power leg - to his right. He brings the leg up as he is turning, and throws it like a whip into the right side of Etim's face. Now, there is a lot to unpack from Barboza here, so let's work through some specifics.

The left foot - Baboza's left leg is his base, providing the power for the kick, and that power starts all the way down in the foot. As Barboza throws the kick and turns, he pivots on that left foot (which, obviously, he has to do in order to turn). In that pivot you can see his Muay Thai background. Barboza comes up on the toes of his foot as he turns, which is the common method of kicking in Muay Thai, but not seen quite as much in MMA. I'm a big fan of this simple motion, and will be talking about it more in the coming weeks.

The hook on the right leg - As Barboza brings the right leg around, he keeps it slightly bent at the knee. This allows him to straighten out the kick at the last second, increasing the whip-like effect and the power in the final blow. You can see the way the leg is bent through the majority of the turn, only to whip straight at the point of impact. Because of that slight bend, it would be fair to describe this as a spinning hook kick. 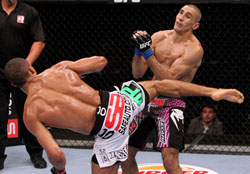 Direction of impact - Barboza is kicking through Etim here, sending his force through Etim's head in a side to side, right to left direction. It's similar to a roundhouse kick or hook punch as opposed to a straight kick or jab. The point is to whip your opponent's head to the side, shutting off the brain momentarily. And that is exactly what happens. Barboza does a terrific job with this momentum. Watch the way his contact with Etim barely interrupts the flow of the kick - he is not simply targeting the head, he is kicking through the head. Take a look at the picture on the right to see this follow through.

Point of impact - When landing a kick, especially from the side, you can use various parts of your foot as the striking point. Barboza lands with a combination of the heel and the outside edge of the foot - two of the best striking points for a kick like this.

Return to stance - At the end of the kick, because he has followed through so well, Barboza's right leg lands back on his right side. Once the leg lands, he quickly switches legs to get back to orthodox stance, insuring that if Etim had not been KO'd, Barboza would be in position to keep fighting.

With all those elements together - the lift on the left leg, the whipping motion of the right leg, the follow through, the edge of the foot - this is a devastating kick. What makes it such a clean KO is that these elements combine with Etim seeming to read it as a body kick, which causes him to just slightly drop his hands. This is a fatal error, as it brings his right hand down from his head, giving Barboza a clear path to the KO. Beautiful kick, executed flawlessly.

So that's the idea of the wheel kick, plus why Barboza's worked so well. Which just leaves us with one point to discuss - the Lekobuster.

The Lekobuster (right) is the name commonly given to a kick executed by Badr Hari on Stefan Leko in K-1 back in 2005. It's one of the greatest KO'd in the history of K-1 - and when you are talking about a kickboxing organization with 20 years of history, that's saying something indeed. For more about this legendary kick, check out this article I wrote about the entire Hari vs. Leko fight back in my Head Kick Legend days.

Almost immediately after the Barboza kick, comparisons to Hari's kick began cropping up, and for good reason. Both are spinning reverse kicks to the head, and both result in spectacular KO. But Hari's kick has a fundamental difference from Barboza's - take a close look.

At first glance, Hari's appears to be more of a spinning back kick (a technique I covered in this Cung Le vs. Wanderlei Silva Judo Chop). The key difference is in the direction of force on impact. In the wheel or hook kick, as we covered above, the force is traveling parallel to your opponent's body, moving through your opponent side to side like a whip. In a back kick, the force is moving perpendicular to your target, pushing through them from front to back. One indication of the force's direction is the attacker's momentum after impact. When Barboza connects, his foot keeps going, returning to its original position and leading Barboza to turn a full 360 degrees. In a spinning back kick, you connect with your back to your opponent, then turn back to return to your stance - note how Hari only turns 180 degrees, then rotates back the way he came after hitting the kick. That is more indicative of a back kick. 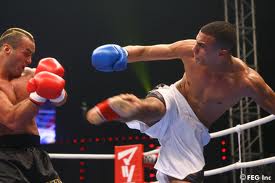 But then there's this picture (right), which clearly shows Hari's leg coming around the side en route to Leko's jaw. If it were a true back kick, you would see the leg cocked at the hip, not whipping around.

In the end, Hari's Lekobuster somewhat splits the difference. It's a hook kick, but Hari bases his body positioning more on a traditional back kick. So while it is close to the Barboza KO, I would classify them as slightly different.

As to which one is better? That's a debate we may be having for some time. But for now, it's safe to say that it will take something special indeed to top Barboza's masterful strike as the KO of the year.