The UFC returns to Brazil on Saturday, January 14, for UFC 142 RIO: Aldo vs. Mendes. At least one Brazilian will make an appearance in each of the event's ten total match ups. Along with four other bouts on the pay-per-view echelon, featherweight assassin Jose Aldo will defend his title against Chad Mendes in the headliner.

After a litany of changes, the bottom half of the lineup, to be analyzed herein, will be available for viewing as well. The FX Network will air four of the five preliminary card fights and the sole remainder will stream live and free on the UFC's Facebook page beforehand. The finalized undercard shakes out like this:

Aldo Vs. Mendes | Belfort Vs. Johnson | Palhares Vs. Massenzio | Etim Vs. Barboza | Silva Vs. Prater

Here's a quick review of the alterations to the original card.

We'll rendezvous in the full entry for a walk-through of each of these five preliminary fights. 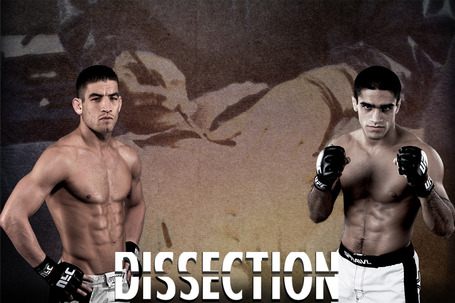 Leading up to his bout with Yves Edwards, Sam Stout had gone to decisions in nine of his ten Octagon fights. His only "finish" was the bad kind, which was tapping to a Kenny Florian rear naked choke in 2006. "Hands of Stone" was starting to become an unfitting nickname. Though he has nine knockouts throughout the course of his career, the first-round left hook that flattened Yves Edwards (right) was his first in the UFC.

The Canadian and TKO lightweight champion is one of the few singularly-styled fighters at MMA's top level. Stout boasts a 16-4 kickboxing record and is billed as a Canadian and North American Muay Thai champion on UFC.com. His stand up technique is fundamentally flawless and machine-like, albeit a little slow in delivery. He's been adept at defending or avoiding takedowns and scrambling back to his feet against threatening grapplers to exploit his striking.

Tenacious is the best word to describe BJJ black belt Thiago Tavares. Though a submission specialist (11 of 16 wins by catch), his shocking quickness and frenetic pace make him a challenge for any lightweight in any phase of combat.

Tavares is an excellent scrambler and his wrestling has progressed, as evinced to the left in his second round stoppage of Fisher. His UFC record is five wins (Naoyuki Kotani, Jason Black, Michihiro Omigawa, Manny Gamburyan, Pat Audinwood) and four losses (Tyson Griffin, Matt Wiman, Kurt Pellegrino, Shane Roller) with one draw (Nik Lentz).

Two of those losses were knockouts on account of some technical deficiencies with his striking, which spells trouble against Stout. His tendency of dropping his hands in exchanges allowed Wiman to find his chin and Roller capitalized on his habit of retreating in a straight line by timing an overhand right.

The obvious specialties of Stout and Tavares gives the match a striker vs. grappler slant. Both fighters are difficult to finish but two submissions account for Stout's stoppage-losses; two TKOs for Tavares. Even though he hasn't been impossible to take down, Stout has solid takedown defense and also excels at creating space or cage-walking to break loose. He's been able to defeat bigger and better wrestlers than Tavares by forcing a shootout on the feet for the bulk of the fight.

Tavares is an explosive little firecracker and the type to stick like glue and make something happen if he can force a grappling match. I'd estimate the gap in their skills on the mat to be much closer than the yawning chasm of their standing differential. I expect Stout to battle through a tough first round and then start to dial in his striking to out-point Tavares.

My Prediction: Sam Stout by decision. 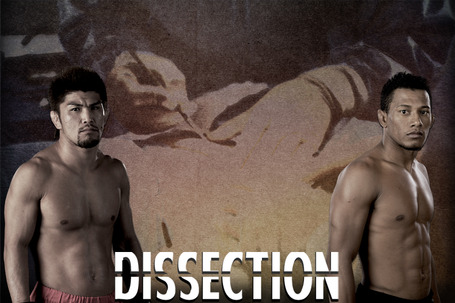 After an unsuccessful stint at lightweight in his 2008 Octagon debut and then colliding with powerhouse wrestlers Chad Mendes and Darren Elkins in his return at featherweight, Omigawa has finally scored his first UFC win.

The seasoned Japanese veteran rolled out his elite Judo arsenal -- hitting the deashi barai or forward foot sweep in the clip to the right -- to stifle talented marksman Jason Young for a unanimous decision at UFC 138.

Despite opening up with consecutive UFC losses again, this time at featherweight, Omigawa was impressively resilient when faced with the paralyzing ground control of Mendes and Elkins, both of whom are amongst the top wrestlers in the division. He lost all three rounds to Mendes but was active on the feet and off his back, and the decision with Elkins was a hotly debated and controversial outcome that five of the popular media sources scored in his favor.

We're yet to fully grasp the potential Alcantara has in the UFC. He's a Jungle Fight lightweight champion with a BJJ black belt and wicked Muay Thai, currently soaring on a twelve-fight streak and boasting wins in all but one of his last nineteen. "Marajo" made his stateside debut at WEC 53 as a lightweight and shellacked Ricardo Lamas for a first-round KO, then dropped to 145 for his Octagon debut and employed his wrestling and submission grappling to out-hustle Felipe Arantes. Beating Lamas was a huge testament to his skill as all of Alcantara's previous fights took place on the Brazilian circuit.

Omigawa has been increasingly effective with his Peek-a-boo style of boxing though he is not without random lapses where he drops his hands and his head-movement goes stale. Omigawa's unique striking, astronomical Judo and feisty ground game will be an interesting contrast with Alcantara's Muay Thai and BJJ medley.

It's not that I'm unimpressed with Alcantara -- frankly, I just don't know how good he is. Lamas is really his only A-level opponent. Plus, he's tangling with one of the most durable and experienced featherweights in the game. Omigawa has only been finished twice in his ten losses, and those stoppages were Omigawa's first two pro-fights in 2005 against sturdy lightweights Aaron Riley and Gesias Cavalcante.

My Prediction: Michihiro Omigawa by decision.

This heavyweight tilt features two Brazilians: one experienced veteran returning to the spotlight and one newcomer looking to shine in his big-stage debut.

Gonzaga was released after his twelve-piece Octagon stint culminated in back-to-back defeats circa 2010 (Junior dos Santos, TKO; Brendan Schaub, decision). His career-defining victory was crushing Mirko Filipovic with the Croatian's signature "Cemetery Kick", but Gonzaga, a BJJ black belt under Wander Braga and successful sport grappler, seemed to fall in love with his striking after the ironic upset. Taking that win out of the mix, Gonzaga basically ran through the mid- and lower-tier heavyweights but fell short against the upper echelon. He did notch an arm-triangle over Parker Porter since being cast off, maintaining his 100% finishing rate with seven career submissions and five TKOs.

Oliveira is a boxer who trains with dos Santos and is unbeaten in the Brazilian fight scene. His only two opponents of note are Geronimo dos Santos and Joaquim Ferreira; the latter being responsible for Junior dos Santos' sole blemish, which was an armbar in 2007. Since Sherdog lists him at 6'7" and the UFC at 6"5", let's just say he's a fairly tall heavyweight. Oliveira's striking style is not what I'd call finely polished or highly technical. He's more of a wild brawler with sketchy defensive tendencies and wide, loopy punches.

Gonzaga is not an accomplished wrestler but has the robust size (252-pounds) and willpower to put Oliveira on his back, where I don't think the younger athlete can compete with the submission specialist.

My Prediction: Gabriel Gonzaga by submission.

Funch trains at Team Link in Massachusetts alongside fellow Brazilian Gabriel Gonzaga. He kicked off his career with seven straight wins, which included a TKO over eventual UFCer T.J. Waldburger, to get a shot in the Octagon in 2009. There, he dropped both of his fights and was released, though facing Johny Hendricks (decision loss) and Claude Patrick (guillotine loss) is no picnic. Funch has since defeated ATT-Connecticut's Ryan Quinn. He's a BJJ black belt but prefers to pound with four TKOs and one submission.

Pyle is a heavily experienced Xtreme Couture rep who has hit his stride late in his career. He's competed in the WEC, IFL, Sengoku and Strikeforce and tackled a number of big names. Only a brown belt in BJJ, Pyle's grappling tactics are perfectly attuned to MMA and he's one of the slickest ground technicians around, as supported by his sixteen submission wins. His boxing has vastly improved and he seems much more comfortable transitioning between striking and grappling. Pyle now has seven UFC fights under his belt: he lost to Brock Larson in his debut, but then compiled four wins in his next six, losing only to Jake Ellenberger and Rory Macdonald.

Both Funch and Pyle are aggressive gamers with similar styles and this should be an exciting affair. Pyle is a very strong favorite on the betting lines but Funch has shown shades of brilliance, such as his shocking display of takedown defense against Hendricks. However, I've been impressed with Pyle's late-stage evolution and like him for the win here.

My Prediction: Mike Pyle by submission.

Arantes is a Chute Boxe product now training under Jorge Patino on the Macaco Gold Team. "Sertanejo" is a smooth striker with an adequate submission grappling acumen, winning six by TKO with four catches. He recently made his Octagon debut on the last Rio card in a competitive decision loss to Alcantara.

Carvalho is a Canadian who's had an interesting journey. The BJJ black belt first appeared in the Shooto promotion undefeated after seven outings and defeated "Lion" Takeshi Inoue to establish himself as a soaring new prospect. The tables would quickly turn. His flawless streak crumbled with four losses in his next six and he faded out of the scene for two years. "Pato" made a comeback in 2010 and accrued three straight and is now granted the biggest opportunity of his life with a shot in the UFC.

Carvalho is also a talented kickboxer, giving him a stylistic mix of striking and submissions that's very similar to Arantes'. Even though he's been a little streaky, I expect Carvalho to justify why everyone was so excited about his potential in the past.

My Prediction: Antonio Carvalho by submission.

All gifs via Zombie Prophet of IronForgesIron.com