The last article tracked the parallel growth of Jujitsu in Japan and Catch Wrestling in Europe as inventions of necessity when faced with armored opponents. This article will focus on the emergence of Brazilian Jiu Jitsu and it's entry into the fighting sport of Vale Tudo in Brazil.

The Japanese art of Jujitsu was outlawed in the late 1800s by Japan's own Emperor in effort to become more modern. The art was saved was Jigoro Kano, a true martial arts legend, who streamlined the overly complicated and disjointed art into Judo and also created the concept of awarding students black belts. He founded his own school and began teaching. One of Kano's star pupils was a man named Mitsuyo Maeda, who would go on to be pivotal in the founding of Brazilian Jiu Jitsu.

This video provides a nice summary of Maeda's background; personal views on martial arts and his role in the founding of Brazilian Jiu Jitsu:

MITSUYO MAEDA: The Origin of BJJ (via AvantGuardBrand)

Maeda's fights in Europe took place in Catch Wrestling matches, and Maeda trained in the art. He was drawn to catch by its focus on combat instead of forms. Maeda mixed what he learned with his own Judo and he passed on those combined techniques to his students including the young Carlos Gracie.

We'll follow Maeda's story to Brazil and meet the Gracies after the jump.

When Carlos was 22-years-old he decided that jiu jitsu had given his life direction and purpose and that he wanted to make a living out of teaching jiu jitsu. Carlos, now a black belt, opened the first Gracie owned jiu jitsu academy in 1925 in Rio.

Carlos' first students were his younger brothers Oswaldo, Gastao, George and Helio Gracie. Helio was 11 years younger than Carlos and was sickly as a child, given to fainting spells and was relegated to watching Carlos giving lessons most of the time. 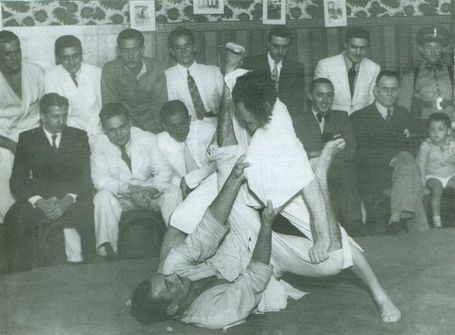 Carlos would give Helio lessons, but Helio's frail body had trouble executing some of the movements. Helio had to rely more on the leverage and timing of the technique than the speed or strength. Together the five brothers, through trial and error, developed the foundation of what they would call Gracie Jiu Jitsu, but would become known to the world as Brazilian Jiu Jitsu. With their own style developing, the Gracies looked to raise awareness of their martial art and they knew perfect venue to display the effectiveness of their style.

In the early 20th Century a side show event at Brazilian carnivals and festivals was gaining popularity. Known as "Vale Tudo" or "No Rules", these were combat contests that pitted two men against each other in a ring or open space for the entertainment of on-lookers.

These Vale Tudo matches are direct ancestors to modern Mixed Martial Arts matches and many in Brazil still refer MMA as Vale Tudo. These matches were not a sport as MMA is today; there were no promotions, weight classes or championships, and fighters represented their styles and their schools more so than just themselves.

One thing that is important to understand about these fights is that Vale Tudo did not develop in a nice clean progression that can be traced back to one original match. The growth was much more organic out of existing catch or professional wrestling matches until it developed into something that strongly resembled modern MMA.

Carlos Gracie issued what is now known as "The Gracie Challenge" in a newspaper, an open invitation to a Vale Tudo style match with a Gracie with a cash prize for the winner. Carlos and his brothers accepted many, many challenges over the next forty years. Boxers, professional wrestlers, Capoeira fighters, and generic tough men were common opponents. As the years wore on Carlos slowly receded form the leadership of the family and Helio stepped forward to bear the Gracie standard.

Helio sought out the biggest fights on the biggest stage he could find. While Helio had become much healthier through his training, he was still a very small man with very little physical strength and he sought to demonstrate the superiority of his skills by challenging much larger opponents. Helio's matches were most often under catch wrestling rules, meaning grappling only, though there are times we know that wasn't the case.

In 1934, Helio fought the much larger professional wrestler Wladek Zbyszko to a draw. In that same year Helio faced Japanese professional wrestler Taro Miyake, who had defeated a great Japanese Jujitsu champion, and submitted him. In 1951, Helio choked out Yukio Kato, widely considered the second best Judoka in the world in just under six minutes.

But it was Helio's 1951 match with Mashaiko Kimura that earned him everlasting fame. Kimura was a living legend and is considered one of the best Judokas of all time. He had boasted that if the smaller and older Helio last three minutes with him, that Kumira would declare the Brazilian the winner. In the 13th minute of the match, Kimura secured a reverse ude garami shoulder lock and when Helio refused to tap, Kimura broke his arm. Carlos Gracie stepped in and forfeited the match on behalf of Helio, but Kimura left extremely impressed with Helio. The Brazilians claimed the moral victory and firmly established the Gracie name in Brazilian combat sports legends.

Kimura invited Gracie to come teach at his Academy in Japan. Helio politely refused the invitation, but the Gracies renamed the reverse ude garami lock "the Kimura" in honor of the Judoka's victory. 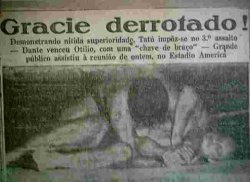 In 1940, a man named Euclydes "Tatu" Hatem defeated George Gracie in a Vale Tudo match. Not only did Tatu defeat George Gracie, he submitted him with the Kimura lock. Tatu was a catch wrestler, the grappling tradition from Europe, and he paired that wrestling with Judo techniques in the mirror image of what Mitsuyo Maeda did in adding catch wrestling to his Judo base.

Tatu called his style of grappling Luta Livre, meaning free fighting and began teaching this style. He and his students scoffed at the use of the gi and focused exclusively on no-gi grappling. They also made extensive use of leglocks, which Judo and Gracie Jiu Jitsu both shunned.

Gausto and Carlos Brunocilla, two of Tatu's students, would go own to produce several Luta Livre experts of their own that would spread the martial art not only across Brazil but also to Germany. Luta Livre took another step forward when a University Professor of Engineering named Roberto Leiato began practicing the art.

Leiato was experienced in both wrestling and Judo and brought a technician's eye to Luta Livre. Leitao believed that gaining leverage was important but that it was a mistake to see strength as a sin instead of an asset in grappling. Luta Livre fighters are more than willing to use leverage but are not shy about using overwhelming strength.

Leitao once captured the differences between Luta Livre and BJJ quite nicely in an interview with Fight! Magazine:

"Gracie was stubborn," Leitao said, referring to Helio Gracie. "He believed that leverage was enough, but he was wrong."

These fundamental difference would spawn an intense rivalry that would span from that 1940 defeat of George Gracie to the modern day. Brazilian Jiu Jitsu vs. Luta Livre would be played out at Vale Tudo matches both in the ring and in the stands and on the streets and beaches of Rio.

For More on Mitsuyo Maeda, the Origins of BJJ, Catch Wrestling and Vale Tudo:

History of Jiu Jitsu: Baptism By Fire and Luta Livre