I think many are expecting Josh Barnett to handily beat Sergei Kharitonov tonight in the main event of Strikeforce and the semi-finals of the ill fated Heavyweight Grand Prix. Kharitanov is potentially dangerous on the feet and obviously has a punchers chance, but the most predictable outcome is Barnett getting a submission on the ground.

Barnett finished Brett Rogers in round 2 when they fought in Texas by Arm Triangle and in a previous Judo Chop I went over the intricacies of that fight I dubbed 'Invisible Grappling'. This time though I thought I'd highlight some of the lesser seen submissions he pulled off when competing in No Gi Submission Grappling tournaments in 2009 and 2010. Some you may already be familiar with, while others you may not have seen at all.

Join me after the jump as we'll look at animated gifs and video of some of Josh Barnett's unorthodox submissions.

While the Kneebar is fairly familiar to those that watch MMA we often see it from open guard work like Frank Mir vs Brock Lesnar 1 or sometimes from rolling attacks when an opponent tries to take your back. Lesser seen because of the risk involved is the Stepover Kneebar when inside an opponent's Half-Guard. There is a risk of getting swept if you are too close to them, but in this gif we see while Barnett's opponent tries for a basic sweep early on Barnett stands high enough to swing his leg over without it getting caught up after winning the hand-fight on the ground to begin with. The safer option usually is to Back-Step kneebar so you free leg doesn't get wrapped up by the opponent's arms resulting in the same seated position before you drop back for the kneebar. Also worth noting is how Barnett falls almost on to his opponent's face. The reason for this and why it's beneficial is that it stretches out the hamstring before you extend the knee joint making it much harder for the opponent to contract and resist the extension. Sometimes when we see kneebars they're in a position where the hamstring is relaxed and while possible to finish it's easier to get a tap when working the hamstring, especially with less flexible opponents.

This submission caught Barnett's opponent off-guard when the grappled in February 2009. Barnett is riding heavy on his side and his opponent, a Gracie Barra BJJ Blackbelt is desperately trying to shrimp in and regain some form of guard. Unfortunately his head is exposed and while maintaining weight on his upper back Barnett Bars the face and turns the head while cranking up forcing his opponent to tap. What's worth noting that in order for Barnett to maintain weight his hips are off the ground forcing is opponent to carry all of his weight without the floor sharing the load as it would if Barnett had been lazy and not elevated. Barnett's opponent was a bit sore after the match, and Barnett being a good sport actually gave him a quick and free chiropractic adjustment to make sure he was OK!

Sometimes this move can be done with the arm scissored but Barnett was able to do it without. Here's a photo of Barnett showing the crank at Lockflow.com 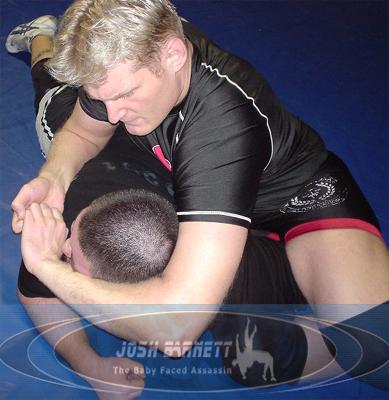 This is a fun option from modified side control / Broken Scarfhold / Kuzure Kesagatame. Barnett is fighting a Brown belt in the advanced Heavyweight (205lbs+) class. The name of the move comes from the Japanese Catch Wrestling lineage such as Shooto and refers to the cradling of the head (to prevent a bridge) with an arm that reaches over and into the opponent's armpit in a similar way to the Stockade position. With his other arm Barnett has a Single Top Wrist Lock grip and while lifting the head Barnett rotates the arm back and away to effect the shoulder and elbow joint, making a V shape with the arm. I have seen some BJJ referees claim that it's a neck crank and therefore illegal but that's a case of the referees being ignorant over lesser seen submissions that exist outside of orthodox Jiu Jitsu. It's deffinitely the shoulder and elbow that gets the pressure while the neck gets a slight tug, less than what would be felt in a good guillotine choke. Barnett's positioning is such that he goes for the far side V-arm and not the near which is fairly unique and I'd have thought more difficult to pull off

Here's a closer look of the regular Pillow V-Armlock aka V-1 lock attacking the near arm with Combatchaz of Lockflow.com. Notice how he has the hand and is twisting the arm out and away from the body - while it's possible to get a tap from the shoulder stress, it's easier to get it from the elbow stress. 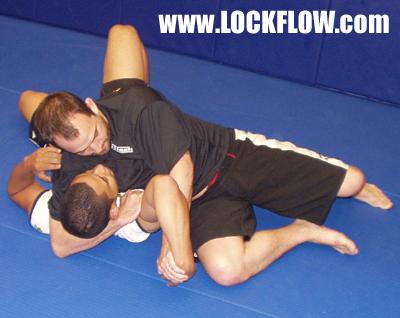 This one is particularly nasty. Barnett has side control and is gripping the arm making his opponent think that's what he's going to attack and keeping his mind focused there. When his opponent brings in his legs near enough to bridge and shrimp-in Barnett grabs the foot at the toes and twists the leg inwards, torquing the knee just like a heelhook. It's a move that will catch many off guard and is one I've seen Billy Robinson like to use.

Here Brandon Ruiz - BJJ Blackbelt, Greco Roman Wrestler and all around Submission Grappler - shows some instruction on the Inverted Reverse Toehold he picked up from Jake Shannon, assistant coach to Billy Robinson based in Utah and founder of Scientific Wrestling: