Kenny Florian to Handle Color Commentary at UFC 134 in Rio

Share All sharing options for: Kenny Florian to Handle Color Commentary at UFC 134 in Rio

UFC featherweight contender Kenny Florian will once again don a dress shirt and a headset, rather than 4-oz gloves and fight shorts, when he fills in for Joe Rogan to handle color commentary duties at UFC 134 in Rio next weekend. Rogan explained his absence on Twitter, while Florian also tweeted to confirm himself as the replacement: 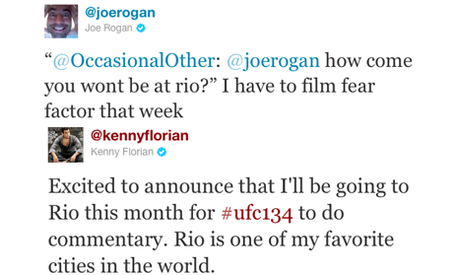 This won't be the first time that Florian has provided commentary for a live UFC event alongside Mike Goldberg, as he previously filled in at UFC 83, UFN 19 and the TUF 11 Finale, as well as in the WEC with Todd Harris for WEC 41 and WEC 49. Florian has also co-hosted MMA Live on ESPN.com and appeared on the Dr. Phil show as a UFC representative.

Ken-Flo's next action inside the Octagon will be on October 8th in Houston, Texas when he challenges Jose Aldo for the UFC featherweight title at UFC 136, which will air live on pay per view.