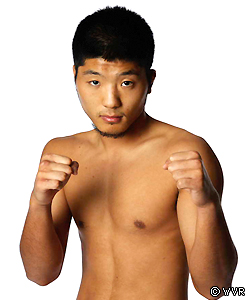 Korean Fighter, A Sol Kwon, was scheduled to fight against Ui Cheol Nam, who was ranked at #4 on Bloody Elbow MMA Lightweight Prospect, on July 24th at Road FC 3.

Kwon is a Sonnen-like character in Korean MMA and loves to trash talk to hype up his fights.  And also Kwon and Nam aren't exactly the best friends, they were long-time rivals but they never had the chance to fight each other.  And finally their fight was scheduled and it looked like everything was going to be settled once and for all.

But there was one factor that could jeopardize the fight; Nam was scheduled to fight for LFC 5 a week before Road FC 3.  Nam won the fight by TKO but his face was swelled up after the fight.  And then Kwon started running his mouth:

"Nam's going to pull off from the fight, he doesn't want to fight me."

"He's such a cutie, I'm planning to pet him during the fight."

After all the statements, fortunately Nam said even though he isn't in his best condition, he would gladly fight Kwon.  but after all the trash talk, Kwon pulled off from the fight.  According to the President of Road FC, Moon Hong Jung, Kwon was having some bad wrist pain so Jung took him to the doctor.  And the doctor said that Kwon isn't in any serious injury and is clear to fight.  The doctor even offered him allowed pain killers if he really needs some.  But Kwon didn't change his mind and ended up pulling off from the fight.  So Jung asked Kwon if he's willing to fight in 3 months for the next event and he didn't really respond to it.

What a dick move on Kwon's part!  He called Nam names and now he doesn't want to fight for no specific reason?  I guess Kwon lives up to his name: Asshole Kwon.