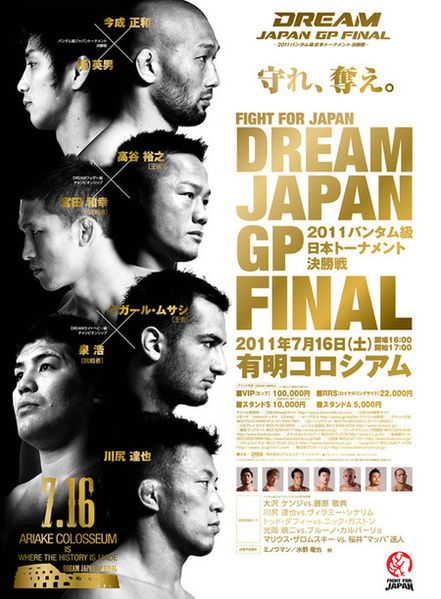 Japanese mixed martial arts isn't dead yet, but it is certainly obscured by the more prominent powers in the sport om today's climate. Most fans probably had no idea that DREAM was putting together a show this weekend at Ariake Coliseum in Tokyo, Japan, and it's difficult to blame FEG for their lack of interest. MMA is no longer a booming sport in Japan, and the financial backing that was once plentiful has moved on to other ventures, leaving many of Japan's most relevant promotions hanging on for dear life.

For the nostalgic fans stateside who reminisce about the PRIDE days and white ring, their lack of interest has been exacerbated by the fact that no live television deal currently exists. It's a difficult time for the sport in Japan, but the persistent head honchos of the fight game insist that the sport will inevitably climb out of the basement and enjoy a more meaningful existence.

Unfortunately, Saturday's DREAM Japan Grand Prix Final event, which will air live on SkyPerfect PPV for fans in Japan, isn't the type of event that will spark the beginning of the ascent. Injuries to former UFC veteran Todd Duffee and the legendary Hayato "Mach" Sakurai have hurt some of the interest in the card, and the exodus of Japanese MMA staples to the United States leaves DREAM with the tough reality that it will likely take years to build stars from the ground up that can draw in a Japanese fanbase that has clearly lost interest.

The event isn't in complete shambles however. DREAM featherweight kingpin Hiroyuki Takaya will attempt to defend his title against former Olympic wrestler Kazuyuki Miyata in what should be an interesting style clash, and Masakazu Imanari will battle Hideo Tokoro in the DREAM Bantamweight Grand Prix Final. You won't be able to see the event live in the United States however, so bear with me if my analysis isn't full of unicorns and lollipops.

DREAM Light Heavyweight Championship: Gegard Mousasi vs. Hiroshi Izumi: I'm not going to try to sell you on the idea that this is going to be a competitive fight or that everyone is wrong about how this bout will go down. It's obvious what's going to happen. Izumi, while possessing excellent Judo skills and the credentials to back them up, doesn't have the experience or know-how to challenge a vaunted striker like Gegard Mousasi. There is the outside chance that he can drive Mousasi into the ropes and possibly use those skills to put him on his back, but Izumi doesn't posses the grappling acumen to keep the fight in that position for a lengthy period of time.

Izumi will likely resort to rushing Mousasi after a frustrating opening minute, hoping to take advantage of Mousasi's perceived lacking ability to defend takedowns. Unfortunately, Izumi isn't a world class wrestler like Muhammed Lawal, and I forsee Mousasi evading those maneuvers and countering hard with kicks and strikes, stunning Izumi and finishing him in the first or second round.

DREAM Featherweight Championship: Hiroyuki Takaya vs. Kazuyuki Miyata: The only fight on the card with legitimate interest for many fans is the featherweight title showdown between current champion Hiroyuki Takaya and former Olympic wrestler Kazuyuki Miyata. Miyata's vaunted Olympic level wrestling ability and relentless, blue-chip style attack should be enough for him to edge out the the powerful striking abilities of Takaya. The intrigue lies in Takaya's performances on Japanese soil, namely the takedown defense he displayed against Bibiano Fernandes. Miyata may have a hard time pinning down Takaya, but I think he finds a way to get waist control, put on a show with a couple of suplexes, and stifle Takaya from the top. I'll take Miyata via decision.

Bantamweight Grand Prix Final: Masakazu Imanari vs. Hideo Tokoro: We have to give Tokoro some credit in the lead-up to this event. Many fans didn't give him a chance against Yoshiro Maeda, and he was able to narrowly edge out Atsushi Yamamoto as well. With all of the high profile losses that Tokoro has amassed on his record over the years, a finals appearance wasn't a foreseeable prediction by most fans.

Unfortunately, I think his run will end on Saturday night in Tokyo as he'll face off against Masakazu Imanari, who is well known among hardcore fans as a grappling whiz who has the propensity to fight in a bizarre fashion that normally results in his eventual victory. Imanari's grappling chops should be on display in a more entertaining fashion against Tokoro, mainly due to the fact that Tokoro has feasted on opponents who couldn't keep up with his quick transitions and constant pressure on the ground in the past. Imanari is a fighter who possesses the strength and knowledge to counter those skills and capitalize. I doubt we'll see much of the passive Imanari in this fight unless Tokoro maintains distance and tries to out strike his non-committal opponent. A fun grappling engagement will ensue, and Imanari will find a way to power through Tokoro's defenses for the tap.

Lightweight: Tatsuya Kawajiri vs. Drew Fickett: Fickett's loss to Brian Cobb is the perfect indication of what may happen in this lightweight scrap. While Fickett possesses the grappling acumen to threaten Kawajiri on the ground, Kawajiri's strength and submission defense is good enough to counter the "Night Rider". "The Crusher" will come out to play and dominate Fickett, likely finishing him with powerful ground and pound from the top.

Welterweight: Marius Zaromskis vs. Eiji Ishikawa: Ishikawa is a late replacement for Hayato "Mach" Sakurai, and as you would expect -- it changes the dynamic of the fight completely. Ishikawa isn't a proven finisher, has never been able to hang with even the better mid-level fighters in the region, and will have a rough night trying to go toe-to-toe with a proven knockout threat like Zaromskis. Zaromskis will bombard Ishikawa and stop him cold in the first.

Bantamweight: Keisuke Fujiwara vs. Kenji Osawa: BloodyElbow.com's radio co-host Forrest Lynn's favorite fighter, and one that he bears a tattoo of on the small of his back, Keisuke Fujiwara will battle former WEC fighter Kenji Osawa in what is being dubbed as a third place bout in the DREAM Bantamweight Grand Prix tournament. Atsushi Yamamoto should be the actual recipient of this opportunity, but an eye injury in his quarterfinal match-up has allowed Fujiwara to fill in.

On paper, this showdown has the makings of a fairly uneventful struggle on the scorecards, but there is some intrigue if Osawa tries to out strike Fujiwara on the feet. Fujiwara has proven to be the more powerful puncher over the course of his career, and while Osawa is a resilient fighter who has the ability to claw his way to victory -- Fujiwara could drop him with either hand in this fight. I'll throw caution into the wind and go with Fujiwara via KO.

Light Heavyweight: Tatsuya Mizuno vs. Trevor Prangley: Prangley's drunken style of boxing, survival skills, and wrestling ability should win him this fight no matter where it goes. Even if Mizuno happens to clip Prangley in an exchange, I have full faith that Prangley will survive and find a way to edge Mizuno on the scorecards. I don't see that happening however. In reality, Prangley out muscles, out wrestles, and out strikes Mizuno, dominating DREAM veteran to a decision.

Lightweight: Eiji Mitsuoka vs. Bruno Carvalho: This is one of the bouts I'm most looking forward to on the card, mainly due to the criticism that Carvalho should have been included on the 2011 World MMA Scouting Report. I had some notes and discussions with my colleague smoogy on his inclusion that pointed toward a resounding "No!". I'm still scratching my head as to how we deduced that conclusion, but this is a great opportunity for Carvalho to prove us wrong.

I think Mitsuoka is a solid opponent in Carvalho's progression toward a stateside berth with a major promotion, and I also believe Mitsuoka will test him. I'm not convinced, however, that he can handle Carvalho on the feet, and I'm curious to see how Carvalho plans to deal with Mitsuoka's creative grappling skills. It should be a closely contested bout, but I'll lean toward Carvalho due to Mitsuoka's deficient striking skills.