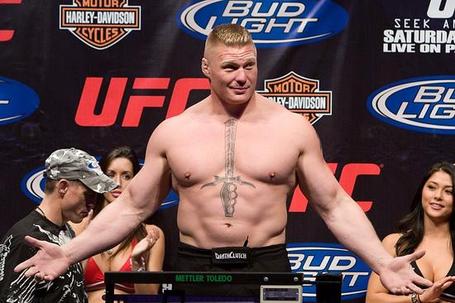 By any measure the UFC has seen a dramatic reversal in fortunes over the the last decade: going from a deeply indebted promotion, barely limping from event to event, to being an immensely popular self-titled "league" that is now valued at over $1 billion. The explanation for their turnaround is simple: the Ultimate Fighter. With the premiere of the ground breaking reality show they saw a meteoric rise in popularity, going from selling a measly 40,000 payperviews for UFC 50 to over 1 million for UFC 66 in only two years’ time. But ever since Liddell defended his Light Heavyweight Title against Tito Ortiz, an event that was labeled by many at the time as the UFC’s pinnacle and which they would never reach again, their growth has continued unabated. As proof one need to look no further than last year’s record setting payperview sales, which were double the amount sold in that record setting year of 2006. The conventional wisdom now is the UFC has not yet peaked and they are in fact poised for even more success as they move into the mainstream of the American collective sports conscious.

As is usual, the conventional wisdom is probably wrong.

Last week Dave Meltzer of the Wrestling Observer Newsletter released the sales estimates for UFC 132, reporting that the event, headlined by Cruz vs Faber, did 350,000 buys. The glass half-full position would be that it did better than many predicted, as the card was plagued with injuries and was lacking a major draw at the top of the card. The glass half-empty position would be that it did well below the UFC’s average and well, well below the average for cards containing a title fight. Even more worrisome, it continues the downward trend that the UFC has been experiencing all year.

Here, for comparison, are the number of payperviews offered per year, the total buys,and the per event average for the last 6 years:

* Only UFC events, doesn’t include WEC 48

As one can see, at their current pace the UFC will sell only slightly more payperviews this year than they did in 2008 and will see the lowest payperview average in the last 6 years – the post TUF era.

What is going on? How does one explain what seems to be a nearly 25% drop in payperview sales in a year’s time? Injuries? A statistical anomaly? Insufficient data? To get a clearer picture perhaps we should look at the reasons, or should I say reason, behind the UFC’s success since Liddell vs Ortiz.

While everyone has been marveling at the massive rise in popularity the UFC has seen year in and year out, they seem to miss out on one important fact: that almost all the growth post UFC 66 can be attributed to one fighter and one fighter only - Brock Lesnar.

A few tidbits to drive this point home:

And it doesn’t stop with merely the events that Brock has participated on, but to the whole promotion. If we use UFC 91 as the dividing line, the contrast before and after that date are very stark . In the 10 events prior to Brock winning the belt the UFC sold a total of 4,315,000 payperviews. In the next 10 events, beginning with UFC 91, they sold a total of 7,725,000 payperviews. That is an increase in sales of over 75%, or 300,000 more buys per event. It is as if those 300,000 that had purchased their first UFC event to see Brock were now not only fans of his but of the promotion he was the champion of.

And to expand on the comparison between the pre-Brock Championship and Brock Championship eras further: between the peak of UFC 66 and the heavyweight title bout of UFC 91, the UFC held 21 payperviews events, selling a total of 9,250,000 payperviews and averaging 440,000 buys per event (if we remove the Brock cards during this span the average drops to 422,00 buys). Compare that to the 28 events that took place during Brock’s reign as UFC champion which sold a total of 17,825,000 payperviews, an average of 636,600 buys per event (For his part, Brock events average 1,205,000 payperviews sold during this time, while non-Brock events averaged 542,000). This is a 70% increase over the pre-Brock Championship era. One could legitimately make the claim that Brock Lesnar has been more valuable to the UFC than the whole of Canada, their most valuable foreign market and a country that is responsible for a 1/4 of all their payperview revenues.

That Brock Lesnar has had a major impact on the bottom line of the UFC is incontrovertible, but what is questionable is how much of this resulting growth is sustainable. One would imagine that the numerous new fans he has drawn would have have since migrated to being fans of the sport, but recent trends don’t seem to support this. In the last 10 events of the Brock Lesnar Championship era the UFC sold a grand total of 7,770,000 payperviews. In the first 10 events of the Post-Brock era they have sold 4,765,000 payperviews,  a  precipitous drop of nearly 40%  and less than what they sold in their 10 events back in 2006. For whatever reason the fans that Brock brought with him do not appear to be sticking around (a scenario Rich Luker predicted).

Perhaps this sudden downturn is merely an aberration, resulting from a combination of bad luck and poor cards. Perhaps, the UFC is merely on another poor stretch, similar to the one from UFC 106 to UFC 110, the UFC’s worst 5-card drought since 2005 which took place ironically in the midst of Brock’s reign. The curious thing about that stretch, beside the rash of injuries that many blame for its poor showing, is that it happened immediately after Lesnar’s first bout with diverticulitis, when the prevailing view was that he would never fight again. Was this a preview of how the Brockheads would react to a post-Lesnar UFC?

Of course, this is only a hypothesis and may be quickly disproven with a strong Autumn. But one would assume that if the UFC had actually gained significantly in popularity over the last few years they wouldn’t see it only limited to Brock Lesnar events but to their cable television programming as well, but that hasn’t been the case. Here are the yearly Nielsen rating averages for their Spike Fight Night Cards:

* Only two Fight Nights have been held so far this year.

And with the exception of the Kimbo Slice starring season 10, the Ultimate Fighter has seen its audience deteriorate as well, with last season being the lowest rated in the reality show’s history. As Jonathan Snowden pointed out recently, while "sports programming has seen a ratings increase of 21 percent over the the last five years", the UFC has oddly seen its ratings going in the opposite direction.

So are we seeing one of Kid Nate’s doomsday scenarios come to life? Should we prepare for another dark ages? Obviously no. Even if the UFC retreats back to its 2007 numbers, it will still be a highly profitable company and mixed martial arts will remain a very viable sport.

It just won't have Brock Lesnar to prop up the irrational exuberance and unrealistic expectations held by many. 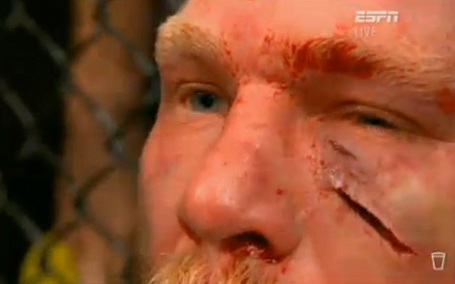 All payperview numbers and Nielsen ratings were taken from MMAPAYOUT and their Blue Book.