Share All sharing options for: Injuries to Martin Kampmann and Igor Pokrajac Force Reshuffling of UFC on Versus 4 and UFC 131

The injury trains just keeps on rolling for the UFC, with the promotion announcing changes to the lineups of several upcoming events, including UFC 131 which takes place in just four days.  At that event, Igor Pokrajac has pulled out of his fight with Krzysztof Soszynski after suffering an injury, while former middleweight, Mike Massenzio (who was released by the UFC last summer, but won the single fight he took since then in April) will return at 205 lbs to take on "K-Sos" on just a few days' notice. Massenzio is now the third opponent Soszynski has had to train for (following Anthony Perosh and Pokrajac), but Massenzio is at a disadvantage himself taking the fight on such short notice. 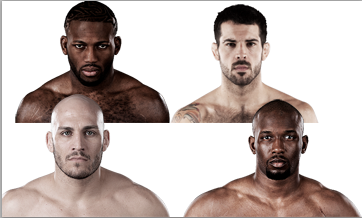 The most significant fighter to be felled by injury is Martin Kampmann, who is pulling out of his June 26th welterweight clash with John Howard at UFC on Versus 4.  Matt Brown will move up from the undercard to face Howard, while Brown's original opponent, Rich Attonito, will now make his welterweight debut against Daniel Roberts.  One could argue that "Doomsday" has caught a bit of a break here, given that Kampmann would have been an extremely tough test for him, but Matt Brown has certainly proven before to be a dangerous underdog.

Just to recap the changes, here are the new bouts:

UFC on Versus 4:
John Howard vs. Matt Brown
Rich Attonito vs. Daniel Roberts