Female Fans an Increasing Part of the UFC Audience

Share All sharing options for: Female Fans an Increasing Part of the UFC Audience 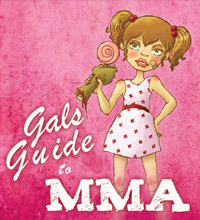 It's no surprise to BE readers that many women are enthusiastic and well-informed MMA fans. Ever since the explosion of the UFC to popularity in 2005, women have made up an ever-increasing share of the MMA audience. Canada.com has a big feature on female UFC fans and even claims that 40% of the audience are ladies.

Here's an excerpt featuring a familiar name to BE readers:

Jackie Maden, a married mother of two, has spent years transfixed by the sport's twin helix of skills-mastery and machismo. So when the dedicated UFC fan encounters interlopers whose intentions are as transparent as their Lucite stilettos, let's just say the Welcome Wagon isn't rolled out.

"The ones who don't have brains tend to ruin everyone else's perception (of female fans)," says Maden, a hospital technician and writer for the website Gal's Guide to MMA. "But there are plenty of girls I know who are interested in all aspects of the sport and don't go to a fight just to get on camera, or to a see a guy with his shirt off getting all sweaty in the cage."

While I suspect that the 40% figure is a bit on the high side, there is no doubt that women are an increasingly important and vocal part of the MMA community.

It's also worth noting that the article preceded last week's Rampage Jackson, Karyn Bryant, Maggie Hendricks, Joe Rogan fiasco. You can catch up on that here.

The article also addresses the issue of women in the cage and whether or not the UFC will change its stance on ladies fighting:

Whether this sea-change in fandom will result in similar changes within the UFC organization is another question entirely. White has repeatedly and emphatically come out against a women's class, suggesting it wouldn't have enough depth and that people don't want to see "two women beatin' on each other."