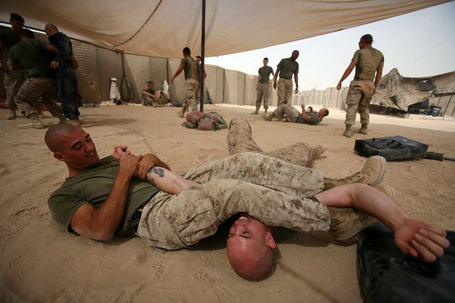 A lot of attention in this series has been devoted to Sport Jiu Jitsu and its champions, and rightly so, they are incredible masters of this amazing martial art. But there is one Academy that stands aloof from the realm of the sporting aspect of the art, and focus on the origins of Jiu Jitsu.

Rorion Gracie and his immediate family still run the Gracie Academy in Torrance, California and they have been the standard bears for those in the Jiu Jitsu community opposed to takeover of sporting mindset. They will scornfully ask how many schools still train their students to defend against strikes, or clubs, or knives when asked about the cons of the spread of the sport focus in training.

So in 1994 when the U.S. military was looking revamp their unarmed combat program, the Gracie Academy was the natural choice place to turn.

The hand-to-hand combat skill of an army hasn’t decided a war in over a century. In the Western military tradition, hand-to-hand fighting was indispensable to ancient combat. The Greeks under the leadership of Alexander and then the Romans under the guidance of the Caesars carved out huge empires with superior close combat skills. As the heavy infantry combat in the valleys of the Mediterranean world gave way to the cavalry dominated fields of France and the invention of bows, crossbows and early firearms that could pierce even the finest armor changed warfare; close combat remained the centerpiece of battles. But when the flintlock musket was invented guns took over warfare.

The Napoleonic Wars were the last great hurrah for hand-to-hand combat in western warfare. Troops armed with muskets would formation march through artillery fire into position where they could unload volleys of fire into the enemy, and then when the enemies wavered charge with bayonets fixed to finish the battle. Troops would receive some basic bayonet drills to perform, but as the wars wore on fresh recruits being rushed to shattered battalions received little more training than ‘this end towards enemy’.

By the American Civil War, rifled muskets had increased the range at which battles took place and hand-to-hand combat became very rare.

During World War II, draftees in the U.S. Army would receive some basic bayonet drills, boxing, and wrestling and would be shown a film about how war has no rules. Elite troops would receive more specialized training, but the relative emphasis on close combat was low for the average solider after basic training.

That said, close combat training is an important aspect of a soldiers training and can be the difference between life and death. After World War II during the occupation of several Eastern nations U.S. soldiers became exposed to martial arts like Judo and Karate and were instrumental in bringing them to the United States. But the actual training by military for soldiers was still minimal.

Then came the Vietnam War, and the realities of the modern insurgency warfare set in for the leadership and they realized that close combat was a glaring weakness in the U.S. training.

In the decades following Vietnam, the commanders in the U.S. military began to reevaluate close combat training. In the late 1980s, Marine Ron Donvito began developing what would become the LINE combat system. While LINE would evolve into different systems and disappear in the 1990s, Donvito laid down the basic principles of the modern Combatives programs. Donvito studied a verity of martial arts and adapted techniques that fit certain criteria.

The moves had to be able to be preformed:

- must result in the death of the enemy.

Donvito also made grappling the first aspect of hand-to-hand combat soldiers would learn in their training. 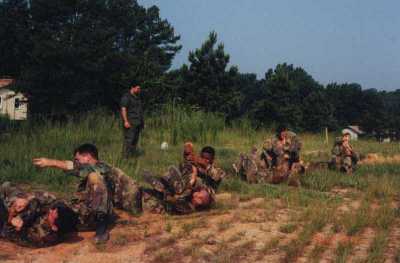 (Marines grappling during a LINE class, via www.fighttimes.com)

In 1994, the entire military began to design a new program and the name Rorion Gracie was not unknown to commanders in the military. Many members of the elite military units had trained under Rorion and had raved about what they head learned, and that combined with Jiu Jitsu’s success in the UFC was enough for the Army brass. Rorion distilled Gracie Jiu Jitsu into 36 basic techniques that would serve soldiers on the battlefield.

In 1995, the Commander of the 2nd Ranger Battalion ordered a general re-invigoration of Combatives training using what they had learned from Rorion, among others. Over the last seven years the army has adapted and expanded upon those techniques to meet the challenges of modern combat for the Rangers.

Strikes and weapons techniques were paired the standing and ground grappling around a simple philosophy: when engaged by an enemy at close range a solider should use standing grappling to maintain enough space to employ a primary (rifle) or secondary (pistol/knife) weapon . If there is not enough space safely to do so then the solider would safely enter the clinch. Once in the clinch either strike or achieve a takedown and then use a dominate position to employ a weapon system or submission hold to pacify or kill the enemy. If a solider finds himself on his back he is taught to use the guard to either create space to employ a weapon, sweep or apply a submission hold.

The Army Rangers were extremely happy with this new combat training and it began to be implemented to the Army as a whole.

The Marines at this time also began adapting LINE into the Marine Corps Martial Arts Program (MCMAP) which is an aggressive martial art that like the Army’s Combatives combined Jiu Jitsu with strikes and weapons techniques. The Marines organized the ground fighting in a few takedowns, teaching the positions and a few sweeps and submissions.

Instructors of these systems have no illusions, and are the first to admit the winner of a hand-to-hand fight in a wartime scenario is the solider whose comrades show up with guns first. From a techincal stand point these systems are composed of bare bones standing grappling; a simple post on the chest, an underhook, a collar tie are used to maintain control so that Muay Thai knee and elbow strikes or headbutts can be used to stun an enemy and then draw a weapon. The emphasis is always on creating time and space to bring a weapon into play, submissions and strikes are considered secondary to that goal. It is a system of survival, not testing one's skills or proving that your the best.

There are additional benefits of Combatives training, it allows instructors to instill the mindset required to be successful in close combat, a mindset that will make soldiers successful in conventional combat. It also purges that initial fear and panic created by close quarters fighting, that sudden bout of claustrophobic terror experienced by all novice grapplers.

An aspect of the grappling the instructors liked is the ability for soldiers fight at full speed and strength with nothing more than some cleared space on the ground; no gloves, no safety gear and no medical leave afterwards. At any point two during an exercise two soldiers can be told to fight, making combat at any moment a part of a soldier’s daily life that can be continued well after basic training.

As a result YouTube is full of intense, if a little sloppy, grappling matches between Marines and Army troops, sharpening their skills and passing the time.

The techniques that the Army uses are simple and practical; gaining the mount, armbars from top position, triangle choke from guard, the scarf position, and the scissors sweep to just name a few. When reorganizing the curriculum at the Gracie Academy Rorion actually made those same 36 techniques the white belt course and called them Gracie Combatives.

Together with his sons, Rener, and Ryron, Rorion’s school focuses purely on self-defense. All positions and techniques are done with the mindset of no time limit, no rules, no points and strikes being thrown. Rener and Ryron have taken the mantle of the Gracie Academy and together they have been very active instructing not only their students but teaching seminars all over the world.

They have stayed very active with the Army’s Combative program; Rener traveled to Fort Benning in 2010 to appraise and advise the use of grappling in the military. Rener has traveled to many military bases and just can’t so no to a roll from a military man. Ryron made a trip to Iraq to instruct combat troops in Jiu Jitsu and squeeze off a few rounds.

With combat veterans bringing in feedback from engagements in Afghanistan and Iraq, a corp. of expert instructors and the Gracies always willing to counsel for adjustment, the Modern Army Combatives program is a complete system that includes techniques that can be employed lethally or non-lethally, with weapons or with out.

Rener and Ryron also give instruction to police departments all over the United States; from Alaksa to Chicago. Teaching officers the basics of ground fighting; how to clinch when a suspect attacks them, prevent their equipment from being turned on them and disengage and draw their weapon safely.

Strikes, weapons, and grappling all combining to a true martial art; in this article we leave Jiu Jitsu exactly where we found it, on the battlefield.

A very special Thank You to the U.S. Army for their help and support for this article!