Share All sharing options for: Bellator 46 Live Play-By-Play and Results 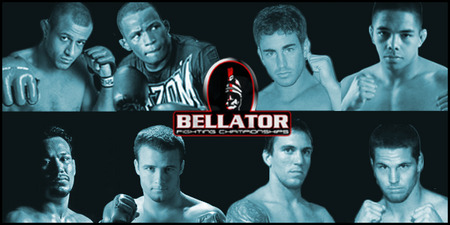 As with every major show, Bloody Elbow will be here to bring you live results and commentary for Bellator 46. Our live blog will start with the beginning of the MTV2 broadcast (9 p.m. ET) so be sure to make Bloody Elbow your home for this event.

Jackie Maden will be posting live play-by-play and results here as well as at her usual home, Gals Guide to MMA.

The card features the opening quarter-final round of Bellator's featherweight Summer Series tournament. The event marks the American debut of the world's #5 ranked featherweight in the USA TODAY/SBNation Consensus MMA Rankings Marlon Sandro as well as the divisional debut of former lightweight tournament winner Pat Curran. Sengoku veteran Ronnie Mann will make his tournament debut after notching his first Bellator win against Josh Arocho at Bellator 42.

Here is the full televised card:

We're now live, results are after the jump!

Round three:  Malegarie is the aggressor early, and he shoots and gets the takedown quickly.  DeVree is trying to throw some punches off his back this time.  Malegarie sinks another guillotine, and this time DeVree taps!  Nazareno Malegarie def. Jacob DeVree via submission (guillotine choke),1:15 of round 3.

Round one:  Both fighters come out strong, trading good shots.  Da Silva lands a good leg kick, then eats a combo.  Sandro's punches are harder but da Silva is landing better kicks.  Da Silva lands a back kick to the body.  Sandro lands a right, then a left hook and da Silva is down.  Sandro goes for a guillotine but da Silva is out, and back up.  They scramble but Sandro ends up with da Silva against the cage.  They're up now, and da Silva keeps up the kicks.  Da Silva catches Sandro with a shot that rocks him for a second.  Sandro lands a combo to end the round, I have that one 10-9 Sandro but it was a lot closer than I thought it would be.

Round two:  Da Silva opens the round with an attempted head kick.  Sandro catches da Silva with an accidental groin kick.  Back to the fight.  Da Silva lands a kick and a punch, but Sandro is still moving forward and landing power shots.  Da Silva's kicks still look great, but now Sandro is landing good kicks of his own.  Da Silva is throwing some big looping shots and Sandro catches him with a nasty punch.  Da Silva still kicking, Sandro still moving forward, and that's the round.  Again, closer than expected, but 10-9 Sandro.

Round three:  Da Silva lands an accidental groin kick first thing.  Sandro is back in quick though.  Sandro still moving forward, and da Silva goes for a takedown but can't get it.  Da Silva catches Sandro with a hard right that rocks him.  Now da Silva clinches Sandro on the cage.  He lands some knees, and they break.  Sandro lands a front kick and eats a punch in the process.  Now Sandro goes for a single but can't get it.  Sandro lands a combo, then another, then gets a takedown and ends up in half guard.  Both fighters are punching on the ground pretty brutally.  Back up, and da Silva lands another leg kick. End of the fight.  I give it to Sandro 30-27.

Round one:  Palomino opens with a leg kick, Curran answers with a kick of his own.  Palomino is moving better than Curran so far.  Curran is moving forward though.  Curran catches Palomino with a shot and staggers him, Palomino shoots, they end up on the mat with Curran on top in half guard.  Curran lands some gnp then tries for a d'arce but can't get it.  Now he's trying for a Peruvian necktie, and Palomino taps!  Pat Curran def. Luis Palomino via submission (Peruvian necktie), 3:49 of round one.

Thanks for hanging, folks.  Fun stuff, as always!