I'm sure most everyone's seen the Alistair Overeem growth timeline by now. The one that starts with Alistair as a "string bean" 23 year old and progresses with conveniently larger image proportions until his heavyweight days in 2008-2009. It's used as proof of steroid use by Overeem detractors who like to use "horse meat" as a delightful euphemism.

Nevermind that 2003 Overeem is the same age and one inch taller than current UFC light heavyweight champion Jon Jones, who most feel (and by his own admission) will pack on some pounds and fight at heavyweight as his career progresses. (I already look forward to accusing Jones of 'roid use!)

But whatever. Maybe you think Overeem's on something. Maybe you don't. Maybe you're like me, and you subscribe to the most intense ambivalence on the topic. Regardless, I think we can all agree that Overeem's heavyweight transformation, "enhanced" or not, is an impressive one.

So let us marvel at the man and the "38 pounds of whoop ass" he has put on since his first fight with Fabricio Werdum. 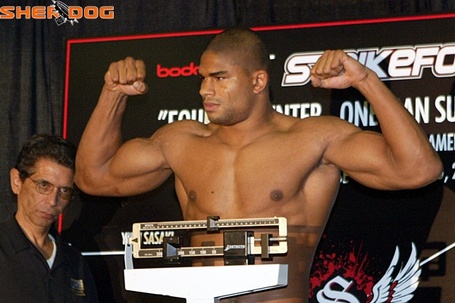 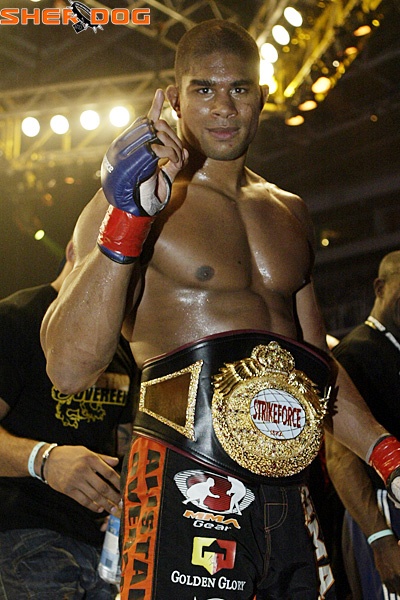 Photos by Jeff Sherwood for Sherdog.com

Number one, indeed, Mr. Overeem. Fresh off his jump to heavyweight, Overeem weighed in for his title fight against Paul Buentello at 224 lb. Even 30 pounds lighter than his current fighting weight, this is one impressive physique. Buentello and his 245 pounds of flab never stood a chance. 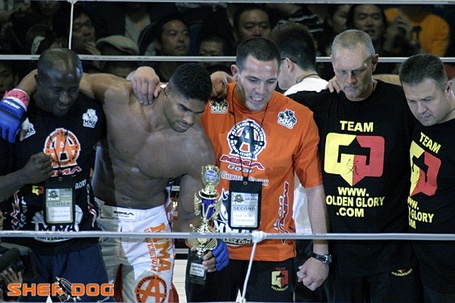 Photo by Stephen Martinez for Sherdog.com

Not a great shot (Who am I kidding? Every shot of Alistair is great.), but this is Overeem at 240 lb. for his fight with Lee Tae-Hyun, a Korean brand of punching bag. 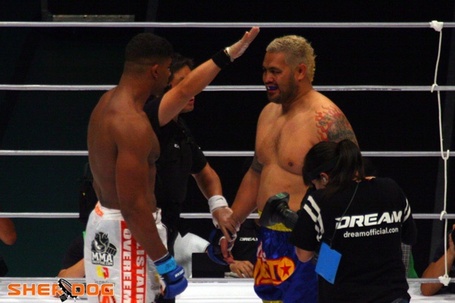 Photo by Stephen Martinez for Sherdog.com

Another suboptimal shot, and we don't have any weigh-in information for this Dream 5 fight against Mark Hunt. One can only assume the Japanese were so impressed with Overeem's traps that they forgot to record weight data. 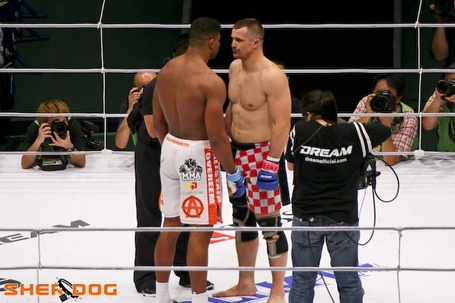 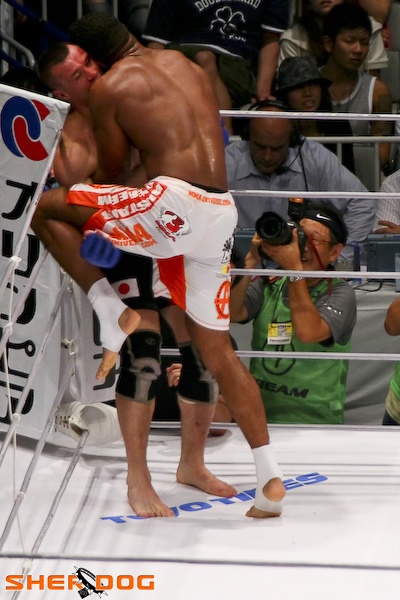 Photos by Daniel Herbertson for Sherdog.com

Speaking of those traps, yum. Overeem tipped the scales at 242 lb. for his ball bashing of Mirko Filipovic at Dream 6. 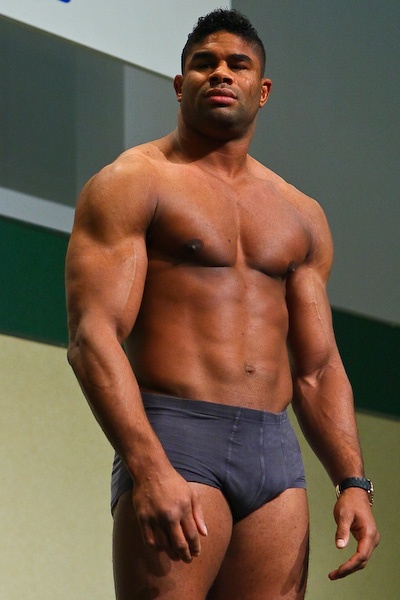 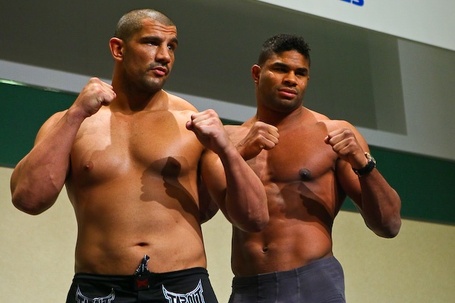 Photos by Daniel Herbertson for Sherdog.com

Oh.My.God. I think it moved.

We're skipping over a pair of Ultimate Glory fights to get to Overeem's Dream 12 dance with James Thompson. This is the first Google-able instance of Overeem weighing in above 250 pounds for an MMA event, over a full year since his fight with "Cro Cop." 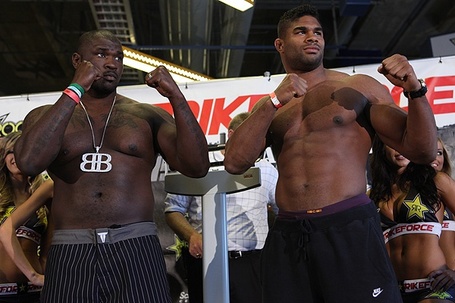 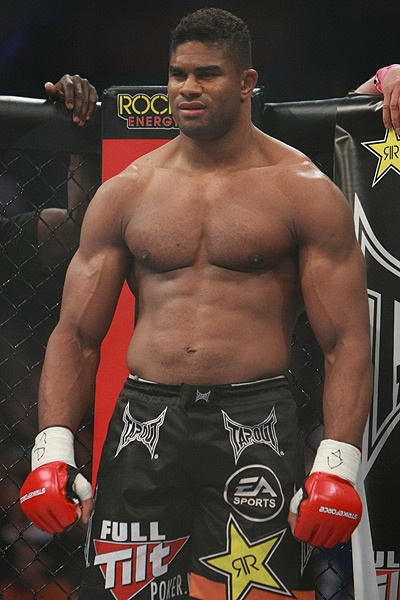 Photos by Dave Mandel for Sherdog.com

A girlfriend once told me that bulging veins are hot, and I can't disagree with her here. Overeem stepped into the cage at 253 lb. (down from 260 lb. for his Dynamite!! 2009 fight against Kazyuyiki Fujita -- no pictures) for his first title defense against Brett Rogers in May of 2010. 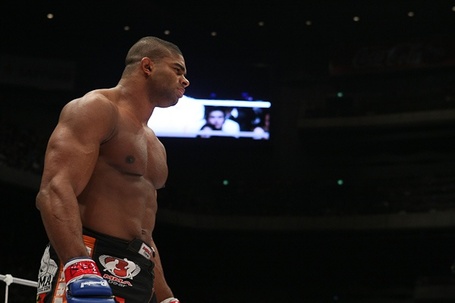 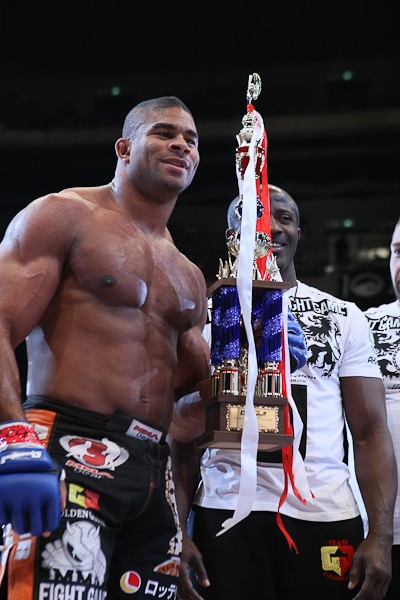 Photos by Taro Irei for Sherdog.com

Overeem found himself back at 260 lb. for this fight, following his K-1 World Heavyweight Grand Prix victory earlier in the month, with former UFC prospect Todd Duffee. Delicious.