Edited and Promoted to the Front Page by Anton Tabuena 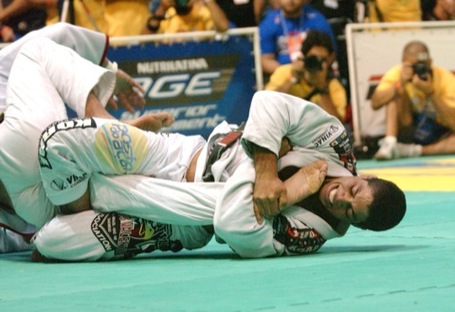 In 2002, the landscape of competitive Jiu-Jitsu began to change. Since 1996 the IBJJF had dominated the sport Jiu-Jitsu world but a new federation rose to challenge it in 2002. Known as the CBJJO, this federation held Brazilian Jiu-Jitsu World Cups in which the winners were given cash prizes, something unheard of in the IBJJF.

This was very attractive to many, including some under the Alliance banner. Alliance was a team formed by a Rolls Gracie black belt, Romero "Jacare" Cavalcanti and one of his first students, Fabio Gurgel. As time wore on Cavlcanti backed away from leading the competition team and focused just on teaching, and Gurgel took the helm. This caused some tension with some of Cavlcanti’s other black belts.

One such black belts was Rodrigo "Comprido" Medeiros, who wanted to compete in this new for-cash tournament, but Gurgel disliked the CBJJO and expressly forbade any Alliance student from entering in the inaugural BJJ World Cup. Comprido and several students entered anyway, resenting Gurgel’s attempt to control them.

The Alliance representatives did very well at the first BJJ World Cup and Comprido won his weight class. However, upon their return to the academy Gurgel expelled them from Alliance.

Schools splintering were nothing new; just two years prior the powerhouse that was Carlson Gracie’s team suffered a massive breakaway when Brazilian Top Team was formed, and then later with American Top Team. The Carlson Gracie Academy lost some of its most famous black belts. But these schools were more focused on competing the quickly growing sport of Mixed Martial Arts than in the world of competitive grappling.

The 2002 exodus from Alliance hurt the competition team badly, and Alliance did not win a single medal at the black belt level at a Mundials dominated by their rival Gracie-Barra. The GB competition team won gold in the open weight and every weight class except rooster.

Comprido gathered together several black belts of the great Romero "Jacare" Cavalcanti who where discontented with Fabio Gurgel’s stewardship of Alliance and united their schools under a new banner, calling the new team "Masters".

One of the most famous defectors was a living legend in Alliance Champion Frenando Augusto "Terere". Growing up in the slums of Rio, Terere looked for an escape from the drugs and violence. He found that escape in training Brazilian Jiu Jitsu under Cavalcanti black belts Alexandre Palva and Roberto Traven.

Terere combined freakish athletic ability with a clever mind for tactics and won Worlds as a blue, purple, brown and black belt all under the Alliance umbrella.

Like Comprido, Terere disobeyed Gurgel in 2002 and was drawn to the CBJJO’s World Cup by the promise of cash prizes and was expelled.

In 2003, Comprido and Terere lead the Masters team to the IBJJF Mundials to reap their revenge on Alliance. The Masters team streaked like a comet through the 2003 Mundials.

Terere took a personal sort of revenge when he faced his former student Marcelo Garcia in the finals. Garcia, instead of following his teacher to Masters, had chosen to align himself with Gurgel and Alliance. Terere claimed his second black belt championship with a triangle choke of Marcelo.

And while Comprido didn’t compete himself, one of his star pupils Felipe Costa entered in the Rooster-weight division.

Costa was another native of Rio, and began training Jiu-Jitsu in 1991 with Comprido. Costa earned his black belt in the tumultuous year of 2002 and followed his teacher away from Alliance. Going into the 2003 Mundials Costa had never won a major IBJJF tournament at any level, and shocked the BJJ world when he won the 2003 black belt final.

At the brown and purple belt several up-and-comers from Master academies made their mark and set themselves as major players in the future of Jiu-Jitu. Brown belts Ronaldo Souza and Robert Drysdale finished 1st and 2nd in the Meio-Pesado division and purple belt Andre Galvao won the Absolute division.

Master finished 2nd in the overall team rankings, shocking the establishment of powerhouse teams. Then like a shooting star, it was gone.

For a myriad of reasons Master team dissolved shortly after their Mundials success. Comprido, along with Costa, Terere, another Cavalcanti black belt, Octavio Couto and several others formed the competition team Brasa.

Terere brought with him one of his pupils, a young Andre Galvao. A native of Sao Paulo, Galvao grew up practicing the art of Judo and was well versed in submissions when he began training under Luis Carlos Dagmar at age sixteen. As a result Galvao was ahead of his fellow beginners in Jiu-Jitsu and won a blue belt world championship in 2002.

In 2003 he joined Master team and won gold medals in his weight class and absolutes at the purple belt level at both the IBJJF Mundials and CBJJO World Cup. And in 2004 he repeated the feat at the brown belt level.

Galvao became famous for his hard working attitude and in 2005 that work paid off. He continued his amazing streak and won his first black belt world championship.  Galvao would go on to be a key player in the birth of another BJJ team and try his hand at MMA.

Roberty Drysdale, native of Utah, faced Fernando Marques in the finals of the heavyweight division. Drysdale was a world champion at the purple and brown belt level and joined Brasa because of his close friend Demian Maia convincing him to come train with him.

In that same Mundials in which Galvao won his first black belt championship, Drysdale reached the finals of the Heavyweight division against Fernando Marques.

In that same year, Drysdale and Maia together traveled to represent Brasa at the BJJ World Cup. Drysdale won the Heavyweight division and Maia won the Open class. Drysdale competed in gi jiu-jitsu with great success and decided again to follow his friend Maia to compete at the highest level of no gi at ADCCs in 2007.

Drysdale competed in the heavy weight class and the absolutes. Drysdale defeated Steve Rusk to reach the semi-finals for heavyweight but lost to Xande Ribeiro. Drysadel took bronze by beating Alexandre Cacareco via rear naked choke.

But it was in the Absolutes that Drysdale really shined through. In the semi-finals he defeated fellow Brasa teammate Andre Galvao and then in the final he faced the much smaller and ever dangerous Marcello Garica.

Drysdale took gold from Garica and celebrated with Maia, who had also won gold in the under 87kgs weight class.

This amazing success for Brasa’s team at ADCCs Drysdale’s, Maia’s and Galvao’s focus shifted away from competitive grappling. Maia began to focus on his quickly blossoming MMA career and would be in the UFC before the end of 2007.

Drysdale was hired as the head Jiu-Jitsu coach at Xtreme Couture and has begun to dip his toes into MMA and has won his first two fights.

While this departure from Brasa would hurt the team, their greatest representative would become a transcendent figure in Brazilian Jiu-Jitsu and a champion in the cage as well…