Share All sharing options for: MFC 30 Live Results and Commentary 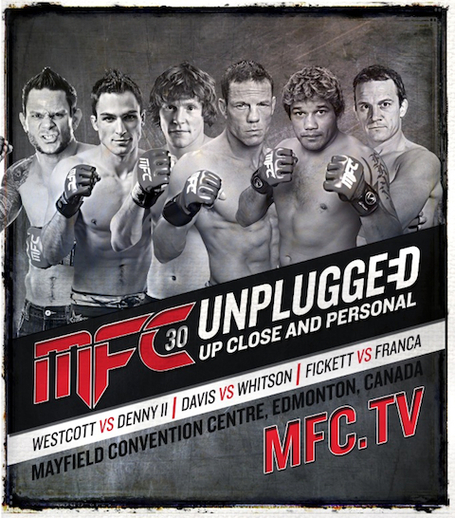 Join us this evening at 10:00 PM ET for live results and commentary of Maximum Fighting Championships 30, airing live on HDNet from the Mayfield Inn Trade and Conference Centre in Edmonton, Alberta, Canada. The card will be headlined by a lightweight showdown between former UFC veterans Drew Fickett and Brian Cobb while the co-main event will feature an attractive duel between UFC veterans Pete Spratt and Marcus Davis in welterweight action.

Play by play and results after the fold...

Round 1: Fickett comes out firing his jab consistently. Cobb attempts to fire an overhand over the top, and Fickett drives through him. After a brief scramble, Cobb gets back to his feet. Cobb lands a right in the initial exchange, then misses a blow. Fickett jumps on Cobb's back as a counter to the miss. Cobb drives Fickett into the ground, but it doesn't shake Fickett. Fickett locks down the body triangle from the back, and Cobb is in trouble. Three minutes left in the round. Fickett working for the rear naked choke, Cobb defending well. Fickett cranking on the neck of Cobb with a minute left in the round, maintaining position near the turnbuckle now. Cobb cannot shake Fickett, wincing from the pain of the crank. Fickett nearly got the choke, and Cobb escapes. Cobb turns around and begins unleashing a barrage of blows, eventually landing unanswered. The referee stops it. Amazing comeback with seconds left. Brian Cobb def. Drew Fickett via TKO at 4:44 of Round 1

Round 1: Davis utilizing a quick footwork, boxing-centric style early, looking to land the jab/overhand combo. Nothing landing so far, Spratt trying to counter as Davis comes forward. Both men land kicks and eat counters. Halfway through the round with no clear advantage to either fighter. Spratt chucks a huge body shot to Davis' gut. Davis glances a knee off Spratt's chin to answer. Davis getting the better of the exchanges now, but nothing major. Davis shoots in with ten ticks left in the round, and Spratt defends well. Tough to call. BloodyElbow.com scores the round 10-10.

Round 2: Forty-five seconds into the round, Spratt buries a leg kick into Davis' thigh, but Davis buries him into the canvas. Spratt kicks Davis off immediately and gets back to his feet.  Back to center. Davis stalks, moving to the turnbuckle and into the clinch. Davis tags Spratt with a knee in close. Spratt now jockeying for position, and gets the release from Davis. Fighters at center now. Spratt kicks, and Davis catches the kick and presses to top control. Davis peppering with short shots from the top, a nice elbow for Davis. More elbows. Spratt finally escapes from the position, and Davis lands a knee as Spratt gets back to his feet. Davis fires, lands a nice overhand and then takes down Spratt once again. Davis in half guard now, attempting to pass to side control. BloodyElbow.com scores the round 10-9 Davis.

Round 3: Davis presses the action early, but misses most of his attempts before being tagged with an overhand right from Spratt. He looks a bit stunned, backing away from Spratt. But he recovers and initiates the clinch. Both men scramble in the center of the ring for position before Spratt trips Davis to the ground. Davis immediately pops back up toward the ropes, back into a clinch battle for position. Two minutes left, and Davis chucks a wild overhand, glancing off of Spratt's face. Spratt can't seem to find a way to land the big blow here as Davis uses his footwork to avoid Spratt's attacks. Davis becoming a bit more immobile here as Spratt lands a few jabs. Davis rushes forward, initiates the clinch, and holds onto Spratt in the turnbuckle. Spratt turns Davis and lands a couple of knees, and Davis responds by reversing the position. They separate with ten seconds left. And Spratt throws a massive right hand as a last ditch attempt. BloodyElbow.com scores the round 10-9 Marcus Davis, 30-28 Davis.

Round 1: Wow... I can hardly contain myself at how much I care about this one. Westcott comes out hard, pressing the action and bombing Denny. Denny avoids most of the shots, backpedaling to the corner. Westcott falls on top of Denny into half guard. Westcott attempts to transition to full mount, but Denny smartly counters. Westcott works to pass, eventually getting past Denny's defenses after two minutes of work. Westcott immediately buries some huge elbows into Denny's dome, then postures up as Denny turns, unleashing a barrage of massive rights. Denny turns back to his back and ties up Westcott. Westcott still in side control, attempting to go to mount. Westcott steps over the back, then hammers Denny, illegally hitting the back of the head. Referee stops it, warns Westcott despite Westcott consistently hitting the back of the head during the round. Action restarts and Westcott goes to town... chucking overhands and landing knees in the clinch. Westcott picks up Denny along the ropes and slams him to the floor. Westcott immediately transitions to a north-south position, attempting to lock a kimura, then an armbar. Westcott's grip slips, and Denny gets on top with 10 seconds left. Round ends. BloodyElbow scores the round 10-9 Sheldon Westcott.

Round 2: Denny attempts a guillotine to open up the round as Westcott runs for the takedown. Westcott escapes, and transitions to side control. After a brief stall along the ropes, Denny gets half guard back. After three minutes of battling for position, Westcott transitions to mount, blasts a couple of elbow strikes down on Denny's head, then gets bucked back to half guard. Denny ties up Westcott from the bottom. Westcott attempting to sink in an arm triangle, but Denny isn't allowing Westcott to buck out of half guard to get it deep., Round ends. BloodyElbow.com scores the round 10-9 Sheldon Westcott.

Round 3: Westcott and Denny exchange blows for a minute before Westcott buries Denny into the canvas. Back to what we saw in the first two rounds. Denny gets hit in the back of the head, and now Westcott is going to have a point taken. Point taken, and now this boring bout gets interesting. If Denny can steal this round, we may have another draw on our hands. Denny lands in the initial exchange after the restart, but then gets tagged hard by Westcott, stumbling around and being tossed over Westcott's hip to the ground. Westcott slips in a guillotine choke and nearly finishes it. Denny escapes, and Westcott immediately transitions to an arm triangle. He can't finish it as Denny tied him up in guard and made sure he could maneuver to side control. Westcott controls from the top till the end of the fight. BloodyElbow.com scores the round 9-9 draw (point deduction to Westcott due to back of the head strikes), 29-27 Westcott.

Round 1: Toney pressing the action early with a heavy leg kick and few overhands that narrowly miss. Lima using his footwork to evade the attacks. Toney lands another kick, but Lima counters with a clean jab. Toney attacks and moves to the clinch. He can't maintain it and they separate. Lima landed punches over the top as Toney kicks. Toney gets smart and start throwing big overhands, landing in center ring and backing Lima to the ropes. Toney glances an uppercut off Lima's dome, then initiates a clinch. Lima reverses the position, but can't get him down. Both men get into a scramble, and Lima drops Toney to the floor. Lima jumps all over Toney with hammer fists. Lima finishes him off. Dhiego Lima def. Jamie Toney via TKO at 2:47 of Round 1.

Round 1: Washington comes out firing, throwing a couple of booming overhands to get to the clinch. Demarce holds him off briefly, but Washington presses to the turnbuckle. Washington works for a minute in the corner, punching at Demarce's ribs until the referee separates due to the stale action. Back to center with three minutes left in the round, both men exchanges blows with nothing significant landing. Washington eventually presses for the clinch against the ropes, but Demarce doesn't give in so easily, resulting in a dance of sorts. Demarce attempting to blast a knee through the chin of Washington in the scramble, narrowly missing. Demarce lands a nice knee as Washington escapes. One minute remaining in the round, Demarce is stalking Washington. Washington circles, then explodes through Demarce for the takedown. A few short elbows and the round ends. BloodyElbow.com scores the round 10-9 Washington.

Round 2: Demarce lands a big shot immediately, dropping Washington. Washington gets back to his feet as Demarce pats himself on the back. Washington doesn't look wobbly however, and they reset in the center of the ring. Demarce stalks Washington into the ropes, now in the clinch. Demarce using his size and Muay Thai to pepper Washington with knees and a glancing uppercut. Washington escapes, then shoots in for a single. He's stuffed, but moments later gains a takedown in the scramble. Washington does some damage from the top for the majority of the rest of the round, posturing up to his feet and glancing a right hand off the side of Demarce's dome. He drops back down into half guard with thirty seconds left, controlling from the top. Round ends. BloodyElbow.com scores the round 10-9 Washington.

Round 3: Demarce needs a big round here, and it's apparent as he's cocking the uppercut and stalking Washington into the corner. Washington eventually engages the clinch, but Demarce turns him into turnbuckle. Washington escapes from the clinch and takes down Demarce. Here we go again. Curtis slides under the ropes and the referee resets them at center ring. Demarce catches a wrist and attempts an armbar to no avail. Miraculously, he regains his feet. Unfortunately, Washington buries him to the mat. Both men very tired. Washington controls, Demarce gets to his feet, but it's too late. Round ends. BloodyElbow.com scores the round 10-9 Washington, 30-27 overall.

Round 1: Early exchange results in Krahn on top after Spang whiffed on a massive left. Spang locks in a guillotine from the bottom and rolls over Krahn. Spang now in full mount, squeezing to try to get the tap. Krahn explodes from the bottom and regains top position near the turnbuckle. Spang gets to his feet and locks in the guillotine again as Krahn takes him down. This time, Krahn is in trouble and he taps roughly 5 seconds after they hit the floor. Andreas Spang def. Cody Krahn via submission (guillotine choke) at 1:18, Round 1.

SBN coverage of MFC 30: Up Close and Personal