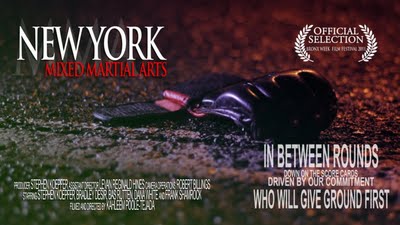 This is a guest feature by Beth of Gal's Guide to MMA.

Living in Manhattan, it seems like the fight to legalize MMA has reached a fever pitch. Director Kahleem Poole-Tejada has created a documentary film on just that subject. New York Mixed Martial Arts has been accepted as an Official Selection in the First Annual Bronx Week Film Festival and I feel that it's going to be a great ambassador for the legalization movement.

Kahleem parallels the fight to legalize MMA in NY with one fighter's struggles to become a professional mixed martial artist. The fighter, Bradley Desir, was a great choice as the face of MMA athletes. This former US Marine and current Fordham University student is an intelligent, handsome, and well-spoken representative for his sport. He breaks the image that some non-fans have of a protruding-browed, mouth-breathing MMA fighter. When he talks about his love for his home state of New York, you feel a certain injustice that the sport he loves is illegal there. Also featured heavily in the documentary is Desir's coach, Stephan Koepfer.  Koepfer, who produced the film, is the President and co-founder of the American Sambo Association and leader and co-founder of The Coalition to Legalize Mixed Martial Arts in New York. Again, Kahleem chose a very good ambassador in Koepfer. Koepfer's sincere love for MMA and his desire for legalizing it in NY come through very well on screen.

One thing the film does not do is spend 50 minutes bashing Bob Reilly, a member of the NY State Assembly with an almost pathological desire to keep MMA illegal in NY. Instead, they clearly debunk the no holds barred myth that is associated with the sport and talk about how when UFC was starting (and owned by SEG) that the no holds barred idea was actually promoted. The "any press is good press" that characterized the initial marketing of the sport has proven to be quite a detriment to its legalization today.

If you have the opportunity, I would definitely recommend this film. It does a great job of engaging both fans and people who have little to no knowledge of the sport. You can check out more at the film's official website