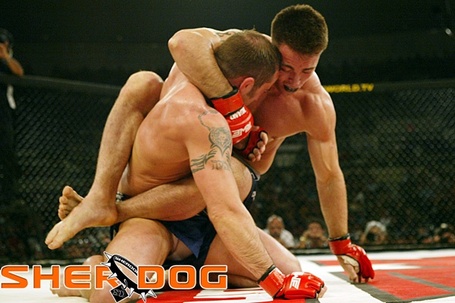 In 1996, American based Mixed Martial Arts was a quickly growing sport. While the Ultimate Fighting Championships (UFC) had been founded in the name of Brazilian Jiu-Jitsu, the defining martial art of American MMA was poised to challenge Jiu-Jitsu as the dominant grappling art.

While Dan Severn’s victory at UFC 5 gave wrestling some recognition, his strong background in Catch Wrestling left most fans considering him a "Submission Grappler". Most fans’ memories when wrestling was mentioned thought of Gary Goodride’s epic knockout of Paul Hurrera, that is until Mark Coleman entered MMA. Coleman won his first 6 matches, claimed two UFC tournements titles and the first UFC Heavyweight title with the simple strategy of taking opponents down, pinning them to the mat and beating the tar out of them.

Wrestling was now seen as a legitimate martial art and the floodgates had been thrown open. Wrestlers like Randy Couture, Kevin Randleman, Mark Kerr, Tito Ortiz and many more flocked to MMA and met a new generation of Jiu-Jitsu fighters in the cages of MMA and on the mats of countless grappling tournaments.

Wrestlers would discover the dangers of submissions and Jiu-Jitsu fighters would find top position would now be at a premium. While grappling arts would learn how to combat each other at first they remained jealously separated. Ken and Frank Shamrock’s Lions Den would be a haven of Shooto, while Mark Coleman and Kevin Randleman would hone their wrestling at Hammer House and Brazilian Top Team would polish their no gi Jiu-Jitsu.

One of the first fighters to begin meshing grappling styles, Pat Miletich would use his grappling prowess to become one of the first great champions in MMA. Miletich wrestled in high school and then began wrestling in Junior College, but had to drop out to help his mother pay medical bills. Miletich began training in karate while he was working where he first became aware of MMA. A friend took him to a Renzo Gracie seminar in Chicago and Miletich became fascinated with Brazilian Jiu Jitsu. Miletch spent an entire year training in Jiu-Jitsu and then was convinced to fight MMA in 1995.

Now Miletich is hardly the first or only man to train Jiu-Jitsu with high school wrestling credentials and some JUCO mat time, but Miletich proved how much wrestlers could benefit from the addition of Jiu-Jitsu with 15 of his first 20 wins coming via submission. Miletich set up his own fight school and one of his first students would become the most successful examples of blending wrestling and Brazilian Jiu-Jitsu.

Matt Hughes was a 2-time NJCAA All-American and a 2-time NCAA DI All-American wrestler in 1998 when he began fighting MMA. As MMA became Matt Hughes’ professional focus, he began training with Miletich. During his time with Miletich, Hughes became the most prolific submission artist in MMA using his powerful wrestling combined with Jiu-Jitsu positional dominance and submission holds.

The late 1990s and early 2000s saw many wrestlers beginning to enter MMA and add Jiu-Jitsu techniques with their wrestling. Jeff Monson, a Pac 10 wrestling champion at Oregon who had also trained in catch wrestling, began training at American Top Team in the early 2000s with Ricardo Liborio, a Carlson Graice black belt. Monson would prove to be a potent blend of power and diverse techniques and would go on to win 4 ADCC medals, become the first IBJJF Open Weight No Gi World Champion, and introduce the MMA world to the North/South Choke.

In 2001, a young homeschooled wrestler with 5 pro MMA fights on his record received a scholarship to Cuesta College. Jake Shields knew the head of a MMA gym in the area, Cesar Gracie and began training in his gym during the off-seasons from wrestling.   Shields would spend almost no time training in the gi, and when he was given his purple belt some in the Gracie family decried that the belt could not possibly be a legitimate. Shields responded by entering in the Pan Ams and winning the gi divison in 2005. Later that year Shields went to ADCCs and won bronze, submitting accomplished black belt Leonardo Santos in the process. Shields was awarded his black belt in 2007, the belt has not be disputed by the BJJ community.   The result is what Shields terms as American Jiu-Jitsu, combining his American folk wrestling background with Brazilian Jiu-Jitsu and he has used it to great success in MMA.

While some wrestlers moved to add Jiu-Jitsu to their games, many others simply began to learn how to defeat it. In both MMA and grappling tournaments wrestlers used their superior standing grappling to put Jiu-Jitsu fighters on their back and then learned how to pass guard without being submitted or swept.

This was trouble for the most devoted Brazilian Jiu-Jitsu fighters because for much of the 1990s top position had been very easy for them to attain. While most fans associate BJJ with submissions from the back, the art preaches that top position is to be valued and the majority of offense in the art comes from the top position.  As wrestlers began learn the MMA game, Jiu-Jitsu fighters found themselves working from their backs almost exclusively.

This influx of wrestlers forced all fighters to begin training Jiu-Jitsu to understand how to fight from off their back. While some fighters focused very hard on improving their Jiu-Jitsu, others trained very specific moves and positions towards one goal; be it sweep, submit or escape. While a purple belt level of grappling is almost required to enter the upper-levels of a weight class, the majority of MMA fighters have somewhat watered down Jiu-Jitsu.

Top position fighters began to spend hours learned how to stay out of compromising positions and submissions making it increasing difficult to use the guard position effectively. Tito Ortiz made a championship run out of sitting in fighter’s guards and pounding them with elbows. Randy Couture began treating the half-guard like it was the mount position.

Submissions from the guard became rarer and rarer at the top levels of MMA as fighters became very well versed in basic submission prevention. As submissions from the back became the tools of only the most skilled BJJ players, most MMA fighters began to adjust their guard game to gear it towards standing back up. This shift has lead to some fighters in the late 2000s declared the close guard all but dead.

Brazilian Jiu-Jitsu fighters have had to adjust their approaches to MMA to find top position and submissions. Fighters with enough natural talent like Nick Diaz and Shinya Aoki simply became hyper-aggressive with their guard games.

Others turned to leg locks to gain an advantage over fighters who largely ignored those submissions, like Rousimar Pahares. Demain Maia prefers to use his excellent half guard, pulling fighters down into a deep half guard then immediately sweeping to top position. Meanwhile Ronald "Jacare" Souza has used his fantastic athleticism to incorporate high-level free style wrestling takedowns with his array of Judo-based takedowns to help him gain top position.

In the modern day of MMA fighters like Evan Duhnan and Phil Davis have not just blurred the line between wrestler and jiu-jitsu fighter, they have erased it all together. The distinction in MMA between the grappling arts is disappearing and ground work is quickly becoming simply "grappling".  Some argue that MMA is watering down Brazilian Jiu-Jitsu, while others argue that it is closer to the art’s original purpose of self-defense than Sport Jiu-Jitsu.

While submissions have been becoming more difficult for fighters to achieve at the highest levels of MMA, the aspect of Brazilian Jiu-Jitsu that is still highly prevalent is the emphasis on positional grappling. Every fighter in MMA has to have knowledge and respect for the ground positions to hope to achieve any sort of success.