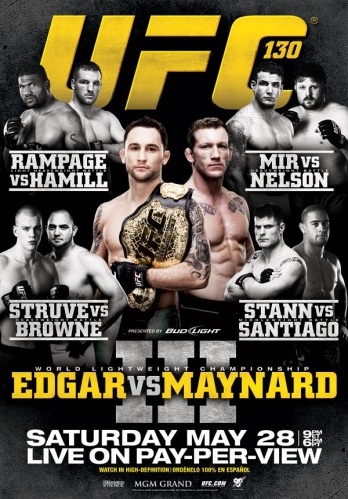 Promoted to the front page from the FanPosts by Kid Nate.

For the second month in a row, the MMA calendar for the Big Three is relatively quiet as Strikeforce continues their post-Diaz vs. Daley dormancy and the UFC is focusing on just one event in their annual Memorial Day show.

That can only mean one thing: it's Bellator time!

After a two-week break, Bellator kicks off the final month of Season 4 with both some familiar names and the finals of their welterweight tournament.

For years, Jay Hieron has been one of the unluckiest guys in the sport, recently released by Strikeforce after being stuck on the their sidelines for months after being offered a title shot that eventually evaporated. He got a shot in the Bellator 170-pound tournament and has made the most of it, competing in the finals this Saturday against Rick Hawn.

Hawn will provide a tough challenge but with a win, Hieron can show the fighting world what he's been saying for years: that he's one of the best and just needed the opportunity to show it.

Details of each event after the jump.

The "superfights" return as Middleweight Champion Hector Lombard returns to action in a non-title fight against 12-year veteran Falaniko Vitale (29-9). Lombard (28-2-1-1) was last seen defeating Joe Doerksen by 1st round TKO at a non-Bellator event in March.

In the 155-pound tournament final, Patricky "Pitbull" Friere takes on Michael Chandler while Dan Hornbuckle and Lyman Good will hook it up on the undercard. Alexander Shlemenko vs. Brett Cooper is also expected to air on TV..

The 11-event season comes to a close with the 205-pound finals featuring Richard Hale vs. Christian M'Pumbu and the 145-pound finals with Patricio "Pitbull" Friere vs. Daniel Straus. Former UFC'er Rory Markham makes his promotional debut against Luis Santos.

As the lightweight division continues to deepen, the situation at the top has needed some clarity since UFC Lightweight Champion Frankie Edgar and Gray Maynard went to a draw to kick off 2011. The third battle in their series headlines the UFC's annual Memorial Day weekend card in a fight that will have plenty more pre-event interest than their second one did.

Two interesting tilts round out the big selling points of UFC 130 with Frank Mir vs. Roy Nelson and Quinton "Rampage" Jackson vs. Matt Hamill. The promotional chatter between Mir and Nelson should be nothing short of tremendous while Jackson/Hamill really comes down to how interested Jackson is in this fight.

Brian Stann vs. Jorge Santiago and Stefan Struve vs. Travis Browne round out the main card, while Thiago Alves vs. Rick Story and Miguel Torres vs. Demetrious Johnson will be on Spike TV.

That's what happens when you run just once a month, I guess.

Josh Nason is a New England-based MMA journalist who contributes to FIGHT! Magazine, WrestlingObserver.com and several radio shows/podcasts. Follow him on Twitter: @JoshNason.