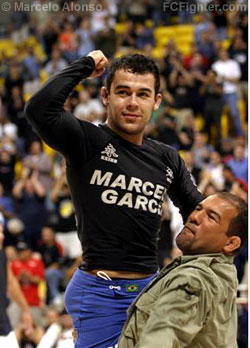 One of the most well known grapplers in the world, Marcelo Garcia is a living legend. Some call him Marcelinho, others refer to him as Yoda (and lets be honest, there is a resemblance), and the first time Eddie Bravo saw Garcia roll he called him the messiah. An iconic champion and the face of Alliance Jiu-Jitsu, Marcelo is a multiple time champion in and out of the gi.

Garcia grew up in a small town in Brazil and got involved with martial arts at a young age, inspired by the martial arts movies of the 1980s. He began to train in Karate at the age of eight and worked hard but after about 4 years became disenfranchised with the art, thinking it impractical in a real fight.

After a year away from training a friend convinced Garcia to come to a Judo class, despite Garcia’s objections that grappling would be useless in a real fight. Garcia loved his first Judo class and began training in Judo under Fabiano de Souza. Marcelo became an avid student and had success at Judo competitions, and discovered that de Souza also training in a martial art called Brazilian Jiu-Jitsu one town over.

Marcelo asked de Souza if he could come with him to a Brazilian Jiu-Jitsu class, and de Souza agreed. The class they attended was run by Rickson Gracie black belt Iran Brasileiro and Marcelo liked it so much began traveling to Brasileiro’s classes three times a week. He was encouraged to try his hand at a competition but Marcelo lost his first match.

Marcelo began traveling around Brazil and became exposed the evolving techniques of Jiu-Jitsu, at one point training at Gracie-Barra Academy in Ribeirao Preto. He became resolved that he needed to travel to a bigger city and train with a bigger team to achieve his new goal; become a world champion.

At a state competition, Marcelo met Paulo Rezende, who ran a large academy in Poco de Caldas. Paulo gave Marcelo free training and a place to live in the academy in exchange, who was only sixteen years old. When Marcelo began training at Paulo’s academy he was primary a Judoka and relied on his top position. Paulo had Marcelo training four times and day and much focus was put on the guard.

Like many great champions, Marcelo would take his weakness and turn it into a strength and become one of the greatest guard players of all time.

Marcelo’s entire life became competitions: contending at the city, state, national and international levels. At one competition he met a young women named Tatiana, who would become his wife. And it was Tatiana, who after watching Marcelo compete saw his potential and convinced him that a move to larger gym and city would benefit his Jiu-Jitsu.

So when Fernando "Terere" Augusto, one of the great middleweights of the early 2000s, offered Marcelo a coaching position at his Alliance Jiu-Jitsu Academy in Sao Paulo, it was Tatiana’s advice that causes Marcelo to jump at the offer. Alliance was one of the largest competition teams in the Brazil at the time, and the primary rival of Gracie-Barra in the early 2000s.

Making ends meet for Mercelo and Taiana was difficult as the coaching position didn’t pay very much, but he caught the attention of Alliance co-founder Fabio Gurgel. He was impressed by Marcelo and told him to move to coaching at the Alliance Team’s flagship academy.

And under the tutelage of Gurgel, Marcelo’s skills took off and in 2000 he became the purple belt World Champion representing Alliance. Then later that same year, Marcelo then promoted to a brown belt took silver at the Brazilian Championships.  In one year Marcelo went from a nice hopeful to a blue-chip brown belt prospect.

Up until this point Marcelo had train exclusively in the gi but as a brown belt he began to experiment with training in no gi grappling. Not at the expense of gi game, because his goal was still to become the best in the world at Brazilian Jiu-Jitsu and in 2002 Marcelo won the brown belt world champion and was promoted to black belt.

His dream was so close now and in 2003 he entered his first black belt mundials.  Marcelo made it to the finals where he met his former employer and teammate Fernando "Terere" Augusto.

Terere won by triangle choke and Marcelo’s dream of being a World Champion was put on hold.

Earlier that year Marcelo had tried his hand at the ADCC Brazilian Qualifiers and had lost in the final match on points and had failed to qualify, but when Denis Hallman was forced to pull out Marcelo was offered his spot.

So in May of 2003 in Sao Paulo, Brazil Marcelo took part in his first ADCC Submission Grappling Championship. Marcelo won his first match against Kluma Kunioku and faced Renzo Gracie in the Quarter Finals.

Their match was an instant classic and remains one of Marcelo’s signature wins. In the semi-finals Marcelo faced Nova Uniao’s Vitor "Shaloin" Ribero. In just twenty seconds Marcelo left Ribero unconscious on the mat, using one of his signature arm-drags to take Ribero’s back.

Finally Marcelo would defeat University of Michigan wrestler Otto Olsen for the gold medal in the 77kg division and again prove the futility of Michigan athletics. With ADCC gold around his neck Marcelo went back to training, preparing for the next year’s IBJJF World Championship.

In 2004 Marcelo again reached the final of the Mundials black belt division, this time against Brazilian Top Team’s Casio Werneck and this time Marcelo won, achieving his goal of being world champion.

Marcelo’s calling card in matches has become his outstanding guard, his greatest weakness when he began training. Marcelo tinkered with the deep half guard, which is a popular position to attain sweeps from because the guard player is so effectively disrupting his opponent’s balance.

Marcelo found that if instead of using his legs to encircle and trap his opponent’s far leg, he could put both legs under his opponent and use them to off-balance his opponents even more. This rather awkward position became known as the X-Guard because of the crossing of the shins, creating an X.  It was an ideal position for sweeping but an extremely technical guard to play, so there is no better person to explain the guard than Marcelo himself.

After his 2006 championship, Marcelo moved to Florida to begin training at American Top Team. Having achieved his goals in competitive Jiu-Jitsu he now wanted to try his hand at Mixed Martial Arts. In October of 2007 Marcelo fought his lone professional MMA match at K-1 Hero’s Korea against Dae Won Kim. Despite positional dominance in the first round, Marcelo lost the fight he was rocked in the early seconds of the second round and an arguable early stoppage occurred.

The experience was enough to convince Marcelo that MMA was not for him, and since then he has tried to distance himself from his MMA career. In 2009, he opened his New York academy and reentered competitive grappling full time. Though he does work with fighters from time to time, like Bellator Champion Ben Askren.

Since then Marcelo has won silver at the 2009 ADCCs and had claimed two more IBJJF World Championships in 2009 & 2010.  Still a young man at only 28-years-old, he is a living legend and will go down as one of, if not the, greatest grapplers of all time.