Nova Uniao is one of the top Brazilian Jiu-Jitsu schools in the world. It has been home to multiple World Champions in both grappling and Mixed Martial Arts. From Vitor "Shaolin" Riberio, to B.J. Penn, to Leonardo Santos, to Jose Aldo the gym in has played host to generations of talent and success.

Nova Uniao is the product of the combination of two of the most storied lineages in Brazilian Jiu-Jitsu. Andre Pederneiras was one of the founders and was a black belt under the great Carlson Gracie, the first Gracie to teach the full range of Jiu-Jitsu techniques to students outside the Gracie family.

The co-founder of Nova Uniao was Wendell Alexander, who is a key member of one of the most unique lineages in all of Brazilian Jiu-Jitsu.

Alexander is one of the few men who can claim a Brazilian Jiu-Jitsu lineage that is clear of any Gracie. Unlike the vast majority of BJJ players who trace their instructors back through Carlos Gracie, Alexander’s black belt traces directly back to Mitsuyo Maeda.

Maeda taught his Kodokan Judo, blended with some catch wrestling he had learned while traveling Europe, to several students in Brazil, most famously Carlos Gracie. One of Maeda’s first students was Luis Franca, a man who sadly little is written. In 1937, Franca took a student of his own, and while Helio Gracie was learning Jiu-Jitsu for the first time so was young Oswaldo Fadda.

Fadda would earn his black belt in 1942 and began to given lessons on the outskirts of Rio. By this time the Gracie family had the made the martial art of Jiu-Jitsu well known but many of their prices for instruction were steep and Gracie Jiu-Jitsu was a martial art of the middle and upper class. Fadda taught his lessons in public areas, opening techniques to lower classes for no charge.

In 1950, Fadda and his students finally were able to open their own academy just outside of Rio. The school specialized on footlocks before the rise of Luta Livre made the techniques commonplace in Brazilian grappling. In 1951, Fadda challenged the Gracie Academy in Rio through the Globo Journal famously stating "We wish to challenge the Gracies, we respect them like the formidable adversaries they are but we do not fear them. We have 20 pupils ready for the dispute."

Helio invited Fadda and his students to a competition at the Gracie Academy. Fadda’s students defeated Helio’s, many of them using foot locks though one Fadda student did choke a Gracie student unconscious. While the Gracie’s scoffed at the use of footlocks, referring to it as a "suburban technique", they declared Fadda’s victory as a sign that Jiu-Jitsu belonged to everyone.

The Globo covered the event and gave Fadda excellent press and new students flocked to his academy, as well as tough man challengers. Over the years Fadda and his students defeated all comers. Fadda would earn the fabled 9th degree rank of red belt, the highest honor bestowed to a non-Gracie.

One of Fadda’s students, Sebastiao Ricardo would become instructor to Wendell Alexander.

Alexander began training at the age of 4 in 1970 under Geraldo Flores. Alexander went from toddler to purple belt under Flores, but when Flores moved away Alexander turned to Sebastiao Ricardo. Alexander worked hard under Ricardo, and earned his black belt in 1986. Sebastiao asked Alexander to take over his academy. And when Alexander accepted Sebastiao disappeared, and has not been seen since.

Alexander proved an able teacher, if a tentative competitor. During the late 1980s and early 1990s there was not much in the way of competition and Alexander by his own admission did not have to the energy to seek out the elite competition. That said he did win gold at the first IBJJF Pan Ams in 1996 in the Masters (30-35 years old) Black Belt division.

Despite not having a competitive fire himself, Alexander’s academy in the late 1990s had many successful students in the younger age groups and lower belt divisions. It was during his time coaching that he met Andre Pederneiras, who also had a very young and talented group of students, but neither of their schools could compete with the sheer weight of numbers of the major teams like Gracie Barra and Alliance. In 1995 they decided to merge their academies in order to compete in the quickly evolving world of sport jiu-jitsu.

Together they opened the Nova Uniao Jiu-Jitsu Academy, which combined the very decorated lineages of Carlson Gracie and Oswaldo Fadda to great effect. Some of the school’s first successes were Robson Moura who would become regarded as one of the best BJJ players ever and guiding the young B.J. Penn to become the first American to win a World Championship in 2000.

One of Alexander’s students that would emerge in the 2000s was Leonardo Santos. Santos, like his teacher, started training Brazilian Jiu-Jitsu at the age of 4 and while Santos enjoyed playing soccer as a youth he was raised in a Jiu-Jitsu family and felt obligated to train. 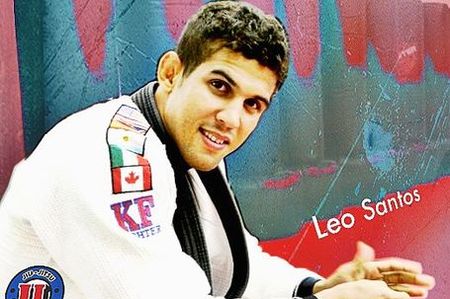 Santos would grow up under the tutelage of Alexander and become one of the most technical, dynamic and greatest BJJ Lightweights of all time. Santos would medal at IBJJF Worlds in 2000 and 2001, but he became discontented with the IBJFF and declared he would only compete for cash prizes. Santos would then join a rival organization that would become the Confederation of Sport Brazilian Jiu-Jitsu (CBJJE) that tried to attract top talent by offering cash prizes.

Santos then lost to Marcelo Gracia in the semifinals

And Santos missed a medal when he faced the much larger Jake Shields in the Bronze Medal Match.

After ADCCs Santos took a break from competitive grappling to help his brother Wagnney Fabiano open an academy and then Santos shifted his focus to MMA.

Fighters like Leo Santos, Wendell Alexander, Oswaldo Fadda and others like Marcelo Pereira who trace their lineages back to Mitsuyo Maeda with no Gracie present keep Luis Franca’s lineage alive today. It remains an important and under valued aspect of a martial art that is so dominated by one family and this lineage is proof that Jiu-Jitsu indeed belongs to everyone.